When the Knight lab at UC San Francisco isn’t probing the neurobiology of hunger, thirst and thermoregulation, they like to do escape rooms, real-life adventure games that challenge players to break out of a locked room. The simulated scenarios can range from the mundane – an office – to the elaborate – a haunted theater – but the trick to escape is figuring out what is or isn’t a clue, which ones lead to the next puzzle, and which ones lead to dead ends.

It’s easy to see why escape rooms would appeal to Zachary Knight, PhD, who approaches puzzles about physiology with a blend of logic and out-of-the-box thinking. Knight is an assistant professor of physiology and a member of the UCSF Weill Institute of Neurosciences. Since starting his lab at UCSF in 2012, Knight and his team have unlocked a series of surprising discoveries about what motivates us to eat, drink and seek comfortable temperatures.

In support of Knight’s work, the Howard Hughes Medical Institute (HHMI) has named him one of this year’s new HHMI investigators. He joins 19 other top U.S. biomedical researchers, who will receive financial support to pursue new, creative ideas.

HHMI provides each investigator with full salary, benefits, and research budget, as well as expenses that cover research space and purchase of critical equipment. The initial seven-year appointment may be renewed for additional seven-year terms based on scientific reviews.

In just the last few years, Knight’s work has upended textbook theories of hunger and thirst, which for decades had taught that neurons in the brain motivate eating and drinking by reacting to the body’s internal nutrient and water balance. It was thought, for example, that as a hungry mouse eats, hunger neurons in its brain would gradually dim as nutrients entered the bloodstream, a process that would take at least many minutes.

“Very few people are willing to clarify whether those questions are really settled,” said Kevan Shokat, PhD, a professor of cellular molecular pharmacology at UCSF, and Knight’s long-time mentor and friend. He says Knight has always been drawn to the big questions and doesn’t shy away from unorthodox answers.

That doesn’t mean Knight is a pie-in-the-sky type.

“I’ve always thought that one of the things that makes a research problem exciting is the combination of a problem that’s important but also addressable using existing technologies,” said Knight. “It’s not often that you’re in that situation.”

The Knight lab’s first big breakthrough started with a test of new technology. In 2014, Yiming Chen, a graduate student in Knight’s lab, was experimenting with a new setup that would allow them to monitor the activity of specific neurons in living mice.

The technique, called fiber photometry, measures the fluorescence of neurons genetically engineered to glow when active. It could record neurons in the hypothalamus, a region deep in the brain that controls many physiological processes. Knight says they chose hunger neurons as a test case because their activity pattern was thought to already be known.

I’ve always thought that one of the things that makes a research problem exciting is the combination of a problem that’s important but also addressable using existing technologies. It’s not often that you’re in that situation.

But when Chen presented a mouse with a piece of food, the activity of its hunger neurons seemed to drop off a cliff, shutting down even before the mouse had taken a bite.

Knight realized this was a clue. Over the next few months, they showed that hunger neurons indeed turn off as soon as an animal saw or smelled food, seemingly anticipating food intake. Moreover, the response of the neurons was proportional to the hunger of the mouse and the calorie-richness of the food, suggesting the neurons’ ability to integrate internal and external information.

“We didn’t have much dogma in our brains to prevent us from accepting our discoveries.” said Chen. “We just said, it is what it is.”

The paper, with Chen as first author, was published in Cell and set a new direction for the Knight lab.

“A lot of people once they hit upon the approach they’re going to take, they stay with it. He’s able to continuously evaluate how a completely different approach can get at the same picture,” said Shokat. He describes Knight’s ability see problems from new angles as “conceptual jiu-jitsu.”

Wisdom of the Body 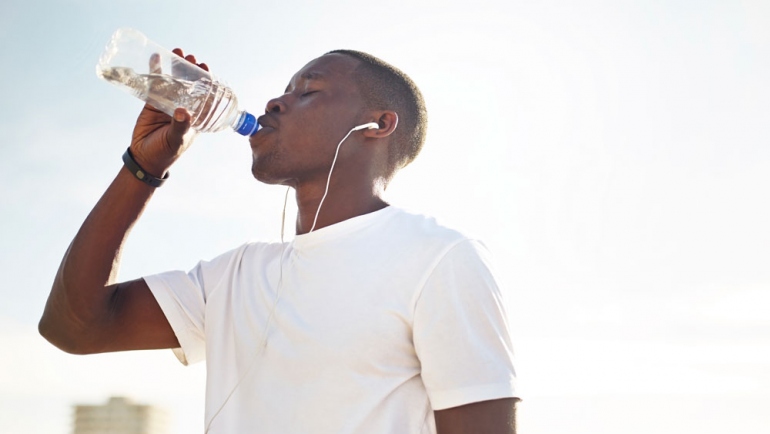 The lab of Zachary Knight, PhD, is interested in understanding neurobiology behind basic biological drives. A few of their key findings:

After the surprise from the hunger neurons, Knight turned to thirst neurons and found a similar anticipatory pattern.

At the first taste of water, thirst neurons begin turning off, long before any change in the body’s fluid balance. They also showed that thirst neurons are activated by food consumption and deactivate most rapidly with cold water – tracking with the human habit of drinking during meals and preference for cold water to quench thirst. That work, led by graduate student Christopher Zimmerman, was published in Nature.

Together, these studies reveal that much of our “volitional” behavior is actually not under our control, says Knight.

He is interested in understanding these biological drives, or what he calls “the wisdom of the body,” in reference to a classic text on homeostasis by Walter Cannon. Down the road, Knight’s findings on the neurobiology of homeostasis – how the brain orchestrates the internal equilibrium of the body – may contribute to better ways to tackle obesity and diabetes.

As an undergraduate at Princeton, Knight initially intended to major in economics, but had a change of heart in his junior year. He had friends who were chemistry majors and they seemed to be “solving real problems.” Knight had to scramble to find a lab to work in because the most talked-about chemistry labs were already full. He finally landed in the lab of Shokat, who was then a junior professor in chemical biology studying protein kinases.

Shokat says Knight was clearly very sharp but not a “dyed-in-the-wool” chemistry student. “He was looking around for an easy-to-understand big idea. He wanted to do something big, but had to do it in 15 months.”

Under Shokat’s direction, Knight embarked on a project to map sites of protein phosphorylation – an important way proteins in the cells of complex organisms are chemically modified after translation. There are no enzymes in nature that are specific to cutting sites of phosphorylation, so Knight thought perhaps he could engineer one.

One day, Knight walked into Shokat’s office and proposed a new approach: instead of engineering the enzyme, they could tweak the sites of phosphorylation so they could be identified by existing proteases. “I said, ‘Holy crap, I should have thought of that. You’re right,” recalls Shokat. “I pointed him in the right direction and he came up with a better solution.”

When Shokat moved to UCSF, Knight followed him to the West Coast to continue working in his lab and eventually enrolled in the chemical biology PhD program. During graduate school, Knight and Shokat co-founded a successful biotech company to develop protein kinase inhibitors for cancer treatment. They eventually sold the company, Intellikine, to Takada.

After graduate school, Knight was eager for a new direction and applied to postdoctoral positions in physiology. He went to Rockefeller University in New York City to work with Jeff Friedman, MD, PhD, who studies the molecular mechanisms that regulate food intake and body weight and is known for discovering the hormone leptin.

In retrospect, Knight says he was very naïve about biology. “I knew a lot about synthetic chemistry, a little about metabolism and nothing about neuroscience,” he said.

After a few years in which he felt he was making little progress, came a breakthrough. In a lab meeting, Friedman had made a remark about how they could really study a behavior if they could just figure out which neurons were responsible. Knight was confused: didn’t they already know which neurons were responsible? What Friedman meant, Knight says, was that they needed to know how to identify these neurons genetically, so that they could be manipulated by genetic techniques.

“It’s a super obvious concept now: the idea of genetic access to neurons being the key,” said Knight. But at the time there wasn’t a systematic way to identify these genetic signatures.

This led Knight to develop a technique called phosphoTRAP, which can genetically identify active neurons by capturing phosphorylated ribosomes. With this technique, he could home in on neurons responsible for eating and other behaviors.

In 2012, Knight shifted his sights again, moving back to San Francisco to join the UCSF faculty, where he planned to use phosphoTRAP to identify new cell types and map neural circuits in the brain.

Then, unexpectedly, he saw hunger neurons predict the future state of the body and realized that what had been taken as dogma was actually a puzzle with missing pieces. His aim going forward, he says, is “to use homeostatic neurons as a window to answer some of the most fundamental and unresolved questions of physiology.”

Knight likes to joke that he was probably the least experienced neuroscientist ever hired by the UCSF to do neuroscience. But as he’s done before, he’s found success creating his own path on new terrain.