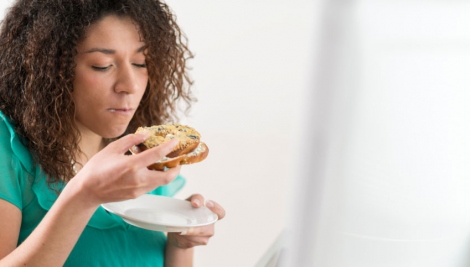 Using techniques developed only over the past few years, UC San Francisco researchers have completed experiments that overturn the scientific consensus on how the brain’s “hunger circuit” governs eating.

Because of this circuit’s potential role in obesity, it has been extensively studied by neuroscientists and has attracted intense interest among pharmaceutical companies. According to the UCSF scientists, their unexpected new findings could reshape basic research on feeding behavior as well as strategies for the development of new anti-obesity drugs.

Scientists have generally believed that the hunger circuit, made up of two groups of cells known as AgRP and POMC neurons, senses long-term changes in the body’s hormone and nutrient levels, and that the activation of AgRP neurons directly drives eating. But the new work shows that the AgRP-POMC circuit responds within seconds to the mere presence of food, and that AgRP neurons motivate animals to seek and obtain food, rather than directly prompting them to consume it.

“No one would have predicted this. It’s one of the most surprising results in the field in a long time,” said Zachary Knight, PhD, assistant professor of physiology at UCSF. “These findings really change our view of what this region of the brain is doing.”

Expecting to Build on Prevailing Model of Hunger

It has been known for 75 years that a region at the base of the brain called the hypothalamus exerts profound control over eating behavior. As neuroscientists refined this observation over the ensuing decades, they zeroed in first on a small area of the hypothalamus known as the arcuate nucleus, and more recently on AgRP and POMC neurons, two small populations of cells within that nucleus.

These two groups of cells, which collectively occupy an area smaller than a millimeter in the mouse brain, are functionally organized in a seesaw-like fashion: when AgRP neurons are active, POMC neurons are not, and vice versa.

Hundreds of experiments in which scientists added hormones or nutrients to brain slices while recording the activity of AgRP and POMC neurons have laid the foundation of the dominant model of how the hunger circuit works. As we grow hungry, this view holds, gradual changes in hormone levels send signals that begin to trigger AgRP neurons, the activity of which eventually drives us to eat. As we become sated, circulating nutrients such as glucose activate POMC neurons, which suppresses the desire to eat more food.

Yiming Chen, a graduate student in Knight’s lab, was expecting to build on the prevailing model of the hunger circuit when he began experiments using newly developed fiber optic devices that allowed him to record AgRP-POMC activity in real time as mice were given food after a period of fasting. “No one had actually recorded the activity of these neurons in a behaving mouse, because the cells in this region are incredibly heterogeneous and located deep within the brain,” said Chen. “The technology to do this experiment has only existed for a few years.”

But as reported in the Feb. 19, 2015 online issue of Cell, just seconds after food was given to the mice, and before they had begun to eat, Chen saw AgRP activity begin to plummet, and POMC activity correspondingly begin to rise.

“Our prediction was that if we gave a hungry mouse some food, then slowly, over many minutes, it would become satiated and we would see these neurons slowly change their activity,” Knight said. “What we found instead was very surprising. If you simply give food to the mouse, almost immediately the neurons reversed their activation state. This happens when the mouse first sees and smells the food, before they even take a bite.”

The researchers found that the AgRP-POMC circuit could be quickly “reset,” with POMC cell activity dampened and AgRP neurons again beginning to fire, if the food were taken away. The magnitude of the transition from AgRP to POMC activity was also directly correlated with the palatability of the food offered: peanut butter and chocolate, both of which are much preferred by mice over standard lab chow, caused a stronger and more rapid reversal of AgRP-POMC activity. The AgRP-POMC responses also depended on the accessibility of the food. A slower and weaker transition was seen if the mice were able detect the presence of peanut butter through smell, but couldn’t see the food.

These results show that, while slow, hunger-induced changes in hormones and nutrients activate AgRP neurons over the long term, these neurons are rapidly inactivated by the sight and smell of food alone. A major implication of this discovery, Knight and Chen said, is that the function of AgRP neurons is to motivate hungry animals to seek and find food, not to directly control eating behavior itself.

The fact that more accessible and more palatable, energy-rich foods engage POMC neurons and shut down AgRP activity more strongly suggests that the circuit also has “anticipatory” aspects, by which these neurons predict the nutritional value of a forthcoming meal and adjust their activity accordingly.

Both of these roles of the AgRP-POMC circuit make sense, said the researchers: if an animal has successfully obtained food, the most adaptive brain mechanism would suppress the motivation to continue searching; likewise, since energy-dense foods alleviate hunger for longer periods, discovery of these foods should more strongly tamp down the hunger circuit and the desire to seek additional nutrition.

“Evolution has made these neurons a key control point in the hunger circuit, but it’s primarily to control the discovery of food,” said Knight. “It’s controlling the motivation to go out and find food, not the intake of food itself.”

So far, clinical trials of drugs that target AgRP-related pathways have been disappointing, Knight said, and he believes the new research may provide a new perspective on these efforts. “What probably drives obesity is the rewarding aspect of food. When you want dessert after you’ve finished dinner, it’s because it tastes good, and that doesn’t require hunger at all,” Knight said. “Finding that this circuitry primarily controls food discovery rather than eating changes our view of what we might be manipulating with drugs targeting AgRP pathways. We might be manipulating the decision to go to the grocery store, not necessarily the decision to take the next bite of food.”