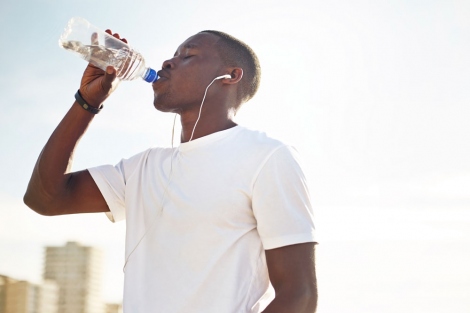 A new UC San Francisco study shows that specialized brain cells in mice “predict” the hydrating effects of drinking, deactivating long before the liquids imbibed can actually change the composition of the bloodstream. The results stand in stark contrast to current views of thirst regulation, which hold that the brain signals for drinking to stop when it detects liquid-induced changes in blood concentration or volume.

Thirst neurons, located in the subfornical organ (SFO) of the brain, do make us thirsty when they sense that blood volume has dipped or when blood becomes too concentrated. But the same signaling mechanism can’t operate in reverse to alert us to stop drinking because thirst is satiated too soon after a person begins to drink, said UCSF’s Zachary Knight, PhD, senior author of the study, which appears in the Aug. 3 issue of Nature. Nor can current theories explain why we usually like to drink something while we eat.

“You drink a glass of water and you instantly feel like your thirst is quenched, but it actually takes tens of minutes for that water to reach your blood," said Knight, assistant professor of physiology and a member of the UCSF Weill Institute for Neurosciences. “You eat something salty and you instantly beginning to feel thirsty even though that food is just in your mouth. The dominant model that thirst is a response to changes in the blood didn't explain that.”

The Role of SFO Neurons when Drinking

After employing a technique that causes specific, targeted populations of neurons in the mouse brain to fluoresce brightly when active, they used fiber optic probes to measure the activity of SFO neurons when mice drank water. They found that SFO neuron activity shut off almost immediately after the mice started to drink and that the mice stopped drinking shortly thereafter. The brief time scale of these events suggests that, rather than acting only as monitors of blood composition, the SFO must also be linked to sensors in the mouth and throat that rapidly detect food and water consumption.

To confirm the relationship between oral-cavity sensors and SFO neurons, the research group deprived the mice of water overnight and used optogenetic methods – in which particular cells are genetically altered so light delivered via fiber optics can activate or inhibit those cells – to shut down SFO neuron activity when they were again given access to water. Despite the water deprivation, and the presumed changes in the blood that would cause, the mice didn't drink. But as soon as the researchers stopped silencing the SFO neurons, the mice drank copiously.

The researchers used similar methods to explore why eating often prompts people to drink and why a drink's temperature affects how refreshing we find it.

"When you sit down at a meal, it's such a universal experience to have a beverage with you, and we've never understood why that is – why you take a bite of food and then take a drink of water," said Christopher Zimmerman, lead author of the study and a UCSF Discovery Fellow in the Knight laboratory. "And almost everyone has had the experience of exercising or doing some sort of activity and becoming really thirsty, and almost viscerally feeling better after drinking a cold glass of water. But why does cold water seem to quench your thirst so much more rapidly?"

To answer the first question, mice that went without food for a night were given food the following morning but no water. SFO neurons lit up almost immediately as the mice began to eat. Mice who were allowed both food and water also experienced the increase in thirst neuron activity, and when the researchers tamped down the neurons’ activity, the mice reduced their water consumption (though they continued to eat).

When mice were given access to water bottles of varied temperatures, the researchers found that although all the mice drank enough water to turn off their SFO neurons, it required significantly fewer licks to deactivate SFO neurons if the water the mice drank was cold. The scientists zeroed in on temperature as a crucial factor in SFO activity by applying cold metal, similar to that found on animal water-bottle droppers, to the mice’s mouths. This proved as effective as cold water in shutting down the activity of SFO cells.

The new study is an extension of Knight's previous work on hunger neurons in mice, for which he was given a National Institutes of Health New Innovator Award in 2015. In that research, his team used similar techniques to record the activity of hunger neurons in mice for the first time and showed that these neurons shut off in response to the sight and smell of food well before the mice actually consumed anything – a surprising finding that parallels those in the new Nature study — just as thirst neurons “anticipate” the bodily changes that drinking will produce, hunger neurons shut down long before mice are actually satiated by eating.