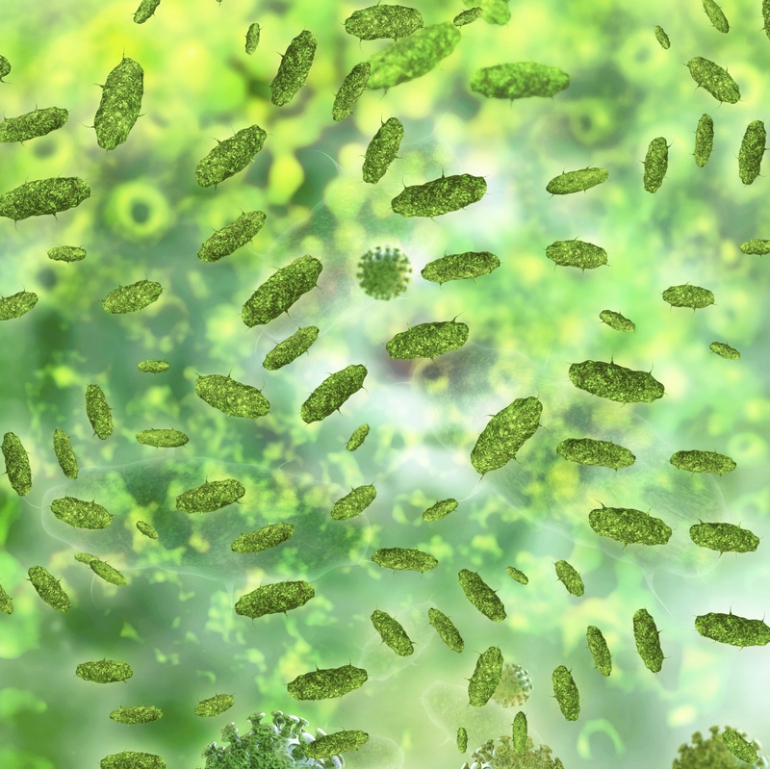 A virus hiding quietly in the gut may trigger the onset of a severe complication known as graft-versus-host disease (GvHD) in patients who receive bone marrow transplants, according to a new study led by scientists at UC San Francisco and Saint-Louis Hospital in Paris, France.

GvHD affects up to 60 percent of patients who undergo bone marrow stem-cell transplants, and kills about half of those affected. After transplants, to prevent a recipient’s immune cells from laying siege to unfamiliar donor cells and rejecting them, clinicians often use drugs to suppress the immune response. GvHD is a mirror image of organ rejection, in which immune cells in the transplant attack its new host, the patient.

Despite the pervasiveness of this disease, there isn’t yet a clear way of foretelling patients’ risk of developing it before they go into surgery. The new study, published online July 31, 2017, in Nature Medicine, unveils a viral biomarker that could allow clinicians to assess patients’ risk of an acute form of the disease known as enteric GvHD, which affects the gastrointenstinal system.

The team used a technique known as metagenomic next-generation sequencing (mNGS)­­ – which can rapidly and concurrently sequence genetic material of all organisms present in any biological sample – to catalog microbes in patients’ digestive tracts, monitoring the evolving bacterial and viral population throughout the transplantation process.

Although mNGS analyses of bacterial populations, called microbiomes, have been much in the news, fewer studies have focused on “viromes,” the term for viral populations.

“Viromes can play an important part in health and disease,” said Charles Chiu, MD, PhD, an associate professor of laboratory medicine at UCSF and principal investigator of the study. “Our goal was to understand what impact transplantation has on the gut virome.”

In the new work, the researchers scanned stool samples taken from 44 patients before they received a transplant and up to six weeks after, and sequenced all the DNA and RNA in the samples in order to assemble a roster of their microbial passengers.

Using this technique, the researchers identified a number of viruses that flared up in the guts of patients who developed the deadly condition. Of particular note were members of the picobirnavirus (PBV) family: the presence of these viruses before transplantation, even in very small populations, was a reliable sign that a patient would likely develop the disease after a transplant.

“I would’ve expected herpesviruses or adenoviruses to be the more likely cause of infection,” said Chiu. “We wouldn’t have picked up picobirnaviruses were it not for the metagenomics approach.”

PBVs are a very diverse family of viruses – more diverse than HIV, said Jérôme Le Goff, PhD, associate professor at the University of Paris Diderot and lead author of the new study. “It’s very difficult to design a single test to detect all viruses simultaneously,” said Le Goff. “So for many years, labs did not have the means to look for PBV.” Indeed, each of the 18 patients who tested positive for PBV was carrying a different strain, a diversity that makes it challenging to detect PBVs using a simple lab test.

The team also observed a previously unreported “bloom” of other resident viruses in patients that occurred three to five weeks after they had received transplants. Intriguingly, the onset of GvHD appeared to trigger the late awakening of these covert viruses, laying to rest a longstanding chicken-and-egg debate: which comes first, viral infection or GvHD? The researchers conclude that much of the viral flare they saw is due to reactivation of latent gut infections following transplantation.

Given the potential utility of PBV as a predictive biomarker, Chiu and his team now hope to develop a metagenomics-based test to screen patients before transplantation. “We also saw shifts in the microbiome but those in the virome were more pronounced,” said Chiu. “Loss of bacteria colonizing the gut has been thought to predispose patients to GvHD; here we show that shifts in the virome may also play a role in the occurrence of this disease.”

Although the new study strongly implicates PBVs in the onset of GvHD, it is too early to tell whether or how these viruses trigger the disease. The team is now enrolling more adult and pediatric patients – both in Paris and at UCSF – to expand their analyses and uncover the mechanism by which the virus modulates the risk of disease. A systematic understanding of the virus’s role could ultimately inform whether using antiviral drugs or tweaking the body’s immune response would be the best strategy to temper the disease.

“It would be great to have a tool that can be used to assess GvHD risk in these patients before they undergo a transplant,” Chiu said, a step that Le Goff said could lead to new therapies. “We hope that in the next few years we will find a way to prevent virus-associated GvHD,” said Le Goff.

Funding for this research came from Abbott Laboratories, Inc., the US-France Fulbright Commission, the Frank Monahan Foundation, and the Phillippe Foundation.