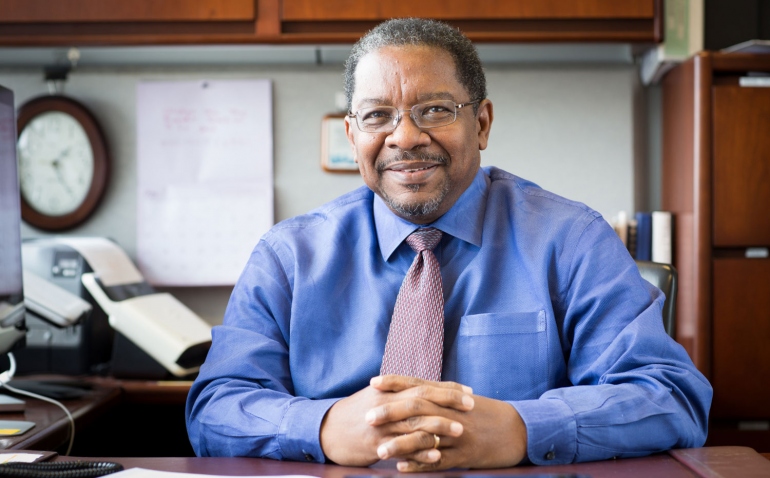 Talmadge E. King, Jr., MD, an international expert on lung disorders who has been a campus leader for nearly two decades, has been appointed dean of the School of Medicine and vice chancellor for medical affairs at UC San Francisco.

A physician-scientist, King’s research has focused on inflammatory and immunologic lung injury. He is best known for his pioneering work in the management of the interstitial pneumonias, a scarring process that often leads to death. His bibliography comprises more than 300 publications and he has co-edited eight books, including an acclaimed reference work on interstitial lung disease. 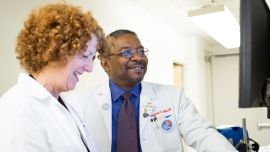 Learn about the UCSF School of Medicine »

As dean of UCSF School of Medicine, King will lead a premier medical school with a four-fold mission of education, research, patient care and public service. It is the only school in the nation ranked in the top five in both research and primary care education by U.S. News and World Report. It receives more competitive research funding from the National Institutes of Health (NIH) than any other school in the country, a measure of the quality of the research conducted by its investigators. UCSF has a distinguished faculty that includes five Nobel laureates.

King replaces interim dean Bruce Wintroub, MD, who was named to the post while a national search for a permanent dean was underway. Wintroub will continue as chair of the Department of Dermatology and vice dean at the UCSF School of Medicine.

“I want to thank Bruce for his tremendous stewardship of the school over the last year,” said UCSF Chancellor Sam Hawgood, MBBS. “He’s been a critical colleague as we made the transition.

“I’m very excited for the School of Medicine as it moves forward. Talmadge brings extraordinary experience, intellect and vision to his new role, as well as humanity. He’s been elected to the most prestigious societies in science and medicine on the basis of his scientific accomplishments, and yet he remains an accessible and deeply trusted colleague.”

King, whose appointment was recommended by Hawgood and approved by UC President Janet Napolitano, assumes his new role on July 1. He will join Hawgood’s executive cabinet, consisting of the deans of the other professional schools – dentistry, nursing and pharmacy – and the Graduate Division, the CEO of UCSF Medical Center and UCSF Benioff Children’s Hospitals, the vice chancellors and other leaders of the University.

King was recruited to UCSF from the University of Colorado in 1997, to serve as vice chair of the Department of Medicine and chief of medical services at SFGH. He became chair, the first year as interim, in 2006. Under his leadership, the department increased its faculty from 521 to 602, grew its budget from $322 million to $454 million, and boosted the number of endowed chairs and distinguished professorships from 39 to 72. The department is the No. 1 recipient of research dollars from the NIH among all departments of internal medicine in the nation. U.S. News & World Report ranks six of its subspecialty clinical programs in the top 10 – AIDS, cancer, diabetes & endocrinology, geriatrics, nephrology and rheumatology. Also, its residency training is among the top programs in the country.

"We have both the honor and the obligation to ensure the health of our community by strengthening health systems and addressing health inequities, whether they occur at home or across the world.”

As dean, King will lead the UCSF School of Medicine at a critical time, as it positions itself to achieve new levels of excellence in its core missions. UCSF’s School of Medicine, which includes 2,197 full-time faculty members, received $517 million from the NIH last year, reflecting its research strengths in a broad range of areas, including immunology, the neurosciences, neurosurgery, women’s health and stem cell research.

“At UCSF, we are privileged,” King said. “Our faculty, staff and students are outstanding. We are able to recruit the best and brightest from around the world and perform the highest level of biomedical research and patient care, and our faculty and alumni have a seat at the table in guiding health policy throughout the world.

“In that position, we have both the honor and the obligation to ensure the health of our community by strengthening health systems and addressing health inequities, whether they occur at home or across the world.”

King, 67, grew up in Darien, Ga., a small town on the Atlantic Coast. King graduated from Gustavus Adolphus College in Saint Peter, Minn., and earned his MD from Harvard University in Boston, Mass. He served an internal medicine residency at Emory University Affiliated Hospitals in Atlanta, and a pulmonary fellowship at the University of Colorado Health Sciences Center in Denver. He lives in Oakland, with his wife, Mozelle D. King, a retired teacher.

King will receive a base salary of $636,000, of which $187,200 is from state funds, with the remainder generated by revenue from the nonprofit clinical enterprise. He also will receive an additional $164,000 through the Health Sciences Compensation Plan (HSCP) and has the potential to receive up to 30 percent of base salary through HSCP, dependent upon achieving performance metrics, both of which are paid by the nonprofit clinical enterprise. King’s base salary falls just below the 60th percentile of medical deans in similar markets. King continues to be eligible for standard pension and health and welfare benefits and, with this appointment, senior leadership benefits.