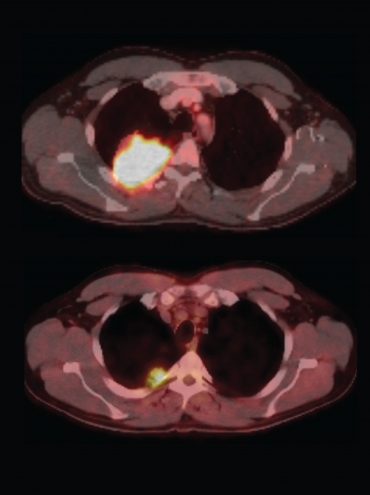 PET-CT imaging from a patient with EGFR-mutant lung cancer before (top) and after (bottom) treatment with the targeted drug erlotinib (Tarceva). By studying the residual tumor seen in the lower image, a UCSF team determined why the patient developed erlotinib resistance, and devised a strategy to overcome it. Image from Blakeley et al., Cell Communications, April 2, 2015.

Capitalizing on a rare opportunity to thoroughly analyze a tumor from a lung cancer patient who had developed resistance to targeted drug treatment, UC San Francisco scientists identified a biological escape hatch that explains the resistance, and developed a strategy in mice for shutting it down.

In experiments that combined the drug the patient had taken with a second compound that blocks off this newly discovered resistance pathway, the researchers were able to durably wipe out cancer cells in mice implanted with cells from the drug-resistant tumor.

“Even in cancers that are responding to targeted therapy by conventional criteria, resistance is already developing,” said the senior author of the new study, Trever Bivona, MD, PhD, assistant professor of medicine and member of the UCSF Helen Diller Family Comprehensive Cancer Center (HDFCCC). “In this work we have begun to crack open the question of why residual disease persists after targeted therapy.”

Between 10 and 35 percent of non-small cell lung cancer (NSCLC) patients carry mutations in a gene that codes for a cell-surface protein called the epidermal growth factor receptor, or EGFR. As its name suggests, under normal circumstances, when a growth factor protein locks onto the EGFR, the receptor sends signals that prompt cells to divide and proliferate. But the EGFR mutations seen in NSCLC cause the receptor to be stuck in an “on” position, leading to rampant cell proliferation.

Over the past decade, medications such as erlotinib (trade name Tarceva), which precisely targets the EGFR and tamps down its activity, have advanced the treatment of EFGR-mutant NSCLC beyond chemotherapy, but significant challenges remain. As many as 30 percent of patients exhibit so-called primary resistance to EGFR inhibitors, in which the drugs have no detectable effect. And among patients who do respond, almost all have an incomplete response leading to acquired resistance, in which drug-resistant cells that survive treatment form residual, often lethal, tumors.

Understanding the biological basis of acquired resistance has proved difficult, partly because patients with late-stage lung cancer rarely undergo surgery, leaving scientists with few drug-resistant tumors to use in research. But as described in the online edition of Cell Reports on Thursday, April 2, 2015, a team of UCSF researchers recently had unusual access to a surgically resected tumor from an EGFR-mutant lung cancer patient who had experienced a substantial, but incomplete, response to erlotinib.

Led by first authors Collin Blakely, MD, PhD, a clinical instructor at UCSF, and Evangelos Pazarentzos, PhD, a postdoctoral fellow, the research group analyzed cells from this tumor using next-generation genome sequencing in an effort to understand how the cells sidestepped erlotinib treatment. They found that the tumor cells retained the EGFR mutation targeted by erlotinib and had not acquired additional cancer-driving mutations, or any other mutations known to confer drug resistance. These results suggested that the cells were still potentially susceptible to erlotinib, but had enlisted some additional mechanism to survive treatment.

That mechanism was revealed when cells from the tumor were implanted in mice that were then treated with erlotinib. The drug effectively inhibited EGFR activity, but the researchers also observed a rapid, 10-fold increase in the activity of a pathway known as NF-kappa-B, and they discovered that this increase is mediated by a previously unknown biochemical complex formed within the tumor cells. Though primarily associated with the immune system, a growing body of work has tied the NF-kappa-B pathway to various forms of cancer.

An experimental drug known as PBS-1086 directly targets the NF-kappa-B pathway, and when the researchers coupled this drug with erlotinib, the implanted tumors shrank significantly, suggesting that combining a compound like PBS-1086 with erlotinib at the outset of therapy may help to prevent acquired drug resistance in EGFR-mutant NSCLC.

Combined drug regimens designed to overcome drug resistance at the outset of therapy are now the norm in treating certain forms of melanoma, said Bivona, and he believes PBS-1086 “has a shot” to play a similar role in NSCLC.

“The NF-kappa-B pathway is engaged by cells in response to EGFR inhibitors as a way to survive treatment,” Bivona said. “Excitingly, if we block that pathway with a novel drug while simultaneously administering the EGFR inhibitor, we see tumors shrink. In lung cancer patients treated with these drugs, and that’s a substantial number of patients, this could be a very powerful companion therapy to minimize or eliminate residual disease.”

The work was funded by the Bonnie J. Addario Lung Cancer Foundation; the National Institutes of Health; the Howard Hughes Medical Institute; the Doris Duke Charitable Foundation; the American Lung Association; the Sidney Kimmel Foundation for Cancer Research; the Searle Scholars Program; the California Institute for Quantitative Biosciences; and the Li Ka-shing Foundation.