UCSF is poised at “a key inflection point” in its history and must be prepared to swing in new directions, Chancellor Sam Hawgood, MBBS, said in his inaugural State of the University speech.

Hawgood addressed a packed auditorium in Cole Hall on Tuesday. The audience included nearly 80 past Chancellors Award winners whom Hawgood recognized to much applause.

Hawgood lauded UCSF for its unwavering support of basic science, its dedication to cultivating the best education and patient care, and its many successes at merging biology and technology in ways that are revolutionizing health.

“To thrive, we will need to be receptive to change and willing to swing in new directions while remaining true to our essential values – no small challenge to get right,” he said.

Hawgood noted that as the University celebrates its 150th anniversary this year, it is “at a hinge of history.” To continue to excel, he said, the University must adapt to changing funding situations and a new era of health and education with advances of technology.

As a 32-year member of the UCSF family, Hawgood said he’s honored to lead UCSF into this next phase in history – marked by new ways of teaching in a digital world, closer ties with the community that surrounds UCSF, and unprecedented levels of teamwork in health care delivery.

“Today, UCSF is a $4.9 billion enterprise. Despite significant stresses for all our community during a recessionary period, this represents more than 50 percent growth in our operating budget over the last seven years,” Hawgood said.

UCSF’s endowment also reached an all-time high in 2014 but it still falls far short of peer private institutions. Hawgood said he will make growing this endowment a high priority.

Earlier this year, the National Institutes of Health funding report showed that UCSF was the top public recipient of competitive grants in 2013, with all four professional schools leading the nation in their respective fields. Hawgood noted this underscores the extraordinary faculty and is also a testament to the vision of previous chancellors, "who saw the opportunity, measured the risk, and built the world-class facilities that enabled this growth.”.

Thriving in a Changing Environment

Despite UCSF’s banner growth, Hawgood noted that the University is facing a substantive and probably long-term change in funding streams.

Federal funding accounts for more than 40 percent of UCSF’s nearly $5 billion budget, yet federal funding for research has fallen 22 percent over the last decade. State funding has declined as well, and now represents less that 10 percent of the budget.

Hawgood said as the research and education funding shifts across the nation, “helping define and execute well new external partnerships and relationships across all our missions will be a priority of my chancellorship.” And these partnerships will help UCSF more directly translate new knowledge into human good, he said.

Hawgood mentioned several exciting new partnerships already under way, including UCSF’s work with Google to create an online platform to enable health workers around the world predict where malaria is likely to be transmitted. The project uses data from the Google Earth Engine and works to enable resource-poor countries to wage more targeted strategies against the mosquito-born disease, which kills 600,000 people a year.

UCSF is also capitalizing on the strength of the University of California through a new tri-institutional partnership among UC Berkeley, Lawrence Berkeley National Laboratory and UCSF, he said. “This new alliance will catalyze bold, potentially transformative and collaborative science and technology initiatives among the three partners, beginning with genomics, imaging, and super-computing. “

This year also saw a new clinical partnership as UCSF and the Children’s Hospital Oakland came together to create the UCSF Benioff Children’s Hospitals. This affiliation rivals the best children’s hospitals in the country and provides safety net services to some of the most underserved families in our community.

“These and other partnerships in place or in the planning stages, if done right, will help define UCSF’s distinctiveness and serve to help attract the brightest of faculty and students to our campus,” Hawgood said. 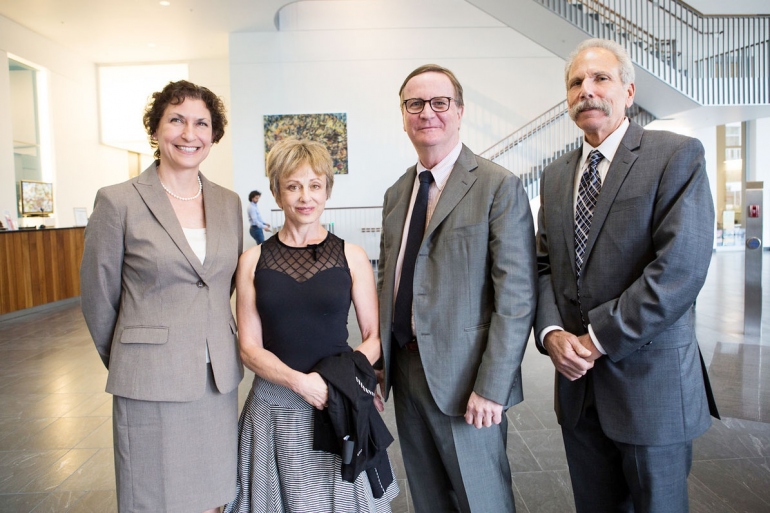 At last year's State of the University, the chancellor announced that Sir Michael Moritz and Harriet Heyman had generously given $30 million to establish the UCSF Discovery Fellows Program in support of basic science research and education. The couple also challenged donors to match $5 million of their gift.

At this year's address, Chancellor Sam Hawgood announced that UCSF has met the fundraising challenge to raise $5 million from 500 donors a year ahead of schedule. Moritz and Heyman have responded by extending the fundraising effort through 2016 with up to $5 million more in matching funds, and by committing a $1 million bonus if the new campaign attracts another 500 donors.

After a decade of planning and building, the University is set to open the UCSF Medical Center at Mission Bay in February 2015. It will be home to UCSF Benioff Children’s Hospital San Francisco, the Bakar Cancer Hospital and the Betty Irene Moore Women’s Hospital.

Hawgood thanked the entire community for its incredible support of this project. Remarkably, he said, this $1.5 billion project came in almost $30 million under budget, a tribute to Chief Executive Officer Mark Laret and the project team led by Cindy Lima and Stuart Eckblad.

He also mentioned the excitement surrounding the Oct. 1 opening of the Global Health and Clinical Sciences building on the same campus.

Continuing Excellence in Its Core Pillars

Hawgood highlighted UCSF’s strengths in the core pillars of research, education and patient care. He said supporting faculty’s ability to pursue their curiosity and ideas with “unfettered freedom” will continue to be vital to UCSF’s core mission.

Precision medicine will be a key part of UCSF’s research future, said Hawgood. To continue to excel in this arena, Hawgood said the University should focus on building new strengths in technological sciences, including partnering in such disciplines as machine learning and artificial intelligence.

The UCSF Genomic Medicine Initiative’s partnership with the companies Syapse and DNAnexus is an example of how UCSF is already pioneering new approaches. This project marks a novel integration of next generation genomic profiling into cancer care. Eligible cancer patients at UCSF will be tested for more than 500 genetic mutations, and their test results will be seamlessly entered into electronic medical records via custom, cloud-based software to help create precision treatments based on the latest science.

The base of all these developments and innovations is education, said Hawgood.

Hawgood stressed the importance of UCSF educators and clinicians, saying they indeed “change human lives,” and make the University a leader in higher education. To stay a leader, UCSF must continue its evolution from “traditional to transformational educational models,” applying lessons from our own findings from the neuroscience of learning and memory, and also incorporating new digital strategies.

A similar revolution is under way across the nation’s health care system, said Hawgood, and “that’s why we have recently outlined a bold vision that calls for a transformation of our clinical programs.” Expanding clinical programs will not only stabilize the financial health of our hospitals in the new health care environment, said Hawgood, but will be critical to enriching UCSF science, education and patient care.

The ‘Number One Priority’

UCSF’s excellence in these three areas stems entirely from stellar community that makes it all possible, said Hawgood:

“The importance of people to the success of our university makes my number one priority as chancellor an easy choice. My focus will be on providing forward-looking leadership to create the climate, facilities and resources to attract and retain the very best faculty, staff, and students to UCSF.”

“The importance of people to the success of our university makes my number one priority as chancellor an easy choice. My focus will be on providing forward-looking leadership to create the climate, facilities and resources to attract and retain the very best faculty, staff, and students to UCSF.”

The chancellor highlighted numerous faculty and students who help make UCSF an internationally recognized pillar of scientific and health excellence. He mentioned Peter Walter, PhD, a recent Lasker Award and Shaw prize winner for his work on vital body cellular responses; Young-Shin Kim, MD, PhD, MS, MPH, an incoming faculty member in psychiatry recently recognized by President Obama; and Schola Matovu and Linda Gregory, PhD students in the School of Nursing, who are fostering international collaborations to share knowledge between nurses in the United States and in East Africa.

Hawgood also told the powerful story of Theo Ndatimana, a first-year student in the School of Pharmacy’s PharmD program. Ndatimana was born and raised in a village in Rwanda, where he witnessed the murder of his entire family during a mass genocide that killed nearly a million people in 1994.

“Despite the odds, Theo triumphed over that tragedy finishing in the top 10 percent of his high school in California and becoming the first person in his extended family to attend college,” Hawgood said.

These and many other exemplary UCSF faculty, students and staff are doing the work that will be required for UCSF to continue to excel in a new era, said Hawgood.

He cited the prescient words of former UC president Clark Kerr, who presided over the system during another era of change in the 1960s, in saying: “it is the social alchemy that gives special character to an institution.”

“Without a doubt our people are our most treasured resource,” Hawgood said.

“After three decades at UCSF I believe our social alchemy of inclusion, collaboration, excellence, and dedication to our public mission is very special and something I will work to preserve at all cost.”