UC San Francisco (UCSF) is working to create an online platform that health workers around the world can use to predict where malaria is likely to be transmitted using data on Google Earth Engine.

The goal is to enable resource poor countries to wage more targeted and effective campaigns against the mosquito-borne disease, which kills 600,000 people a year, most of them children. 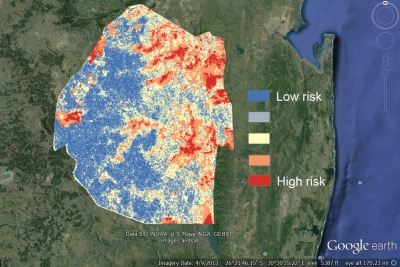 A sample risk map of malaria in Swaziland during the transmission season using data from 2011-2013.

Faced with a multitude of public health needs, countries often make the mistake of cutting their malaria efforts just when they are close to eliminating the disease, said Hugh Sturrock, PhD, MSc, an assistant professor of epidemiology and biostatistics and a researcher in the Global Health Group, which is a part of UCSF’s Global Health Sciences.

“This can have disastrous consequences, since malaria can quickly rebound, putting years of expensive control efforts to waste,” he said. “But with these maps, health workers will know exactly where to target their scarce resources. That way, they can keep fighting the disease until it’s eliminated within their borders.”

Google Earth Engine brings together the world's satellite imagery — trillions of scientific measurements dating back almost 40 years — and makes it available online with tools for scientists, independent researchers and nations to mine this massive warehouse of data to detect changes, map trends and quantify differences on the Earth's surface.

With the malaria prediction platform, local health workers will be able to upload their own data on where and when malaria cases have been occurring and combine it with real-time satellite data on weather and other environmental conditions within Earth Engine to pinpoint where new cases are most likely to occur. That way, they can spray insecticide, distribute bed nets or give antimalarial drugs just to the people who still need them, instead of blanketing the entire country.

By looking at the relationship between disease occurrence and factors such as rainfall, vegetation and the presence of water in the environment, the maps will also help health workers and scientists study what drives malaria transmission. Google Earth Outreach, which helps nonprofits use Google’s mapping technology, is giving UCSF $100,000 to develop the new platform.

Expanding Map to Other Infectious Diseases

The new tool will be piloted in Swaziland, a country in southern Africa that has limited malaria to a few small pockets across the country through the malaria elimination program it launched in 2008 with help from the Global Health Group. Plans are to make the tool available to health workers in other countries working with the Global Health Group’s Malaria Elimination Initiative. The tool could also be adapted to predict other infectious diseases.

Google Earth Engine came out of efforts begun nearly a decade ago by Google computer scientist Rebecca Moore to use data from Google Earth to protect the redwood forest near her home from logging. Since then, scientists have used Earth Engine to measure deforestation, urban development and the retreat of glaciers.

“We’re at an exciting moment,” she said. “We have this enormous scale of computing power that, if it’s guided in the right way, could really make some breakthroughs.”

The Malaria Elimination Initiative is a core focus of UCSF’s Global Health Group, which has been at the forefront of a renewed global effort to eliminate malaria in recent years. The initiative is concentrated on helping 34 countries in Africa, Asia, Latin America and the Middle East. With effective interventions, adequate financing and political commitment, UCSF experts believe these countries could interrupt malaria transmission and eliminate the disease within 15 to 20 years.