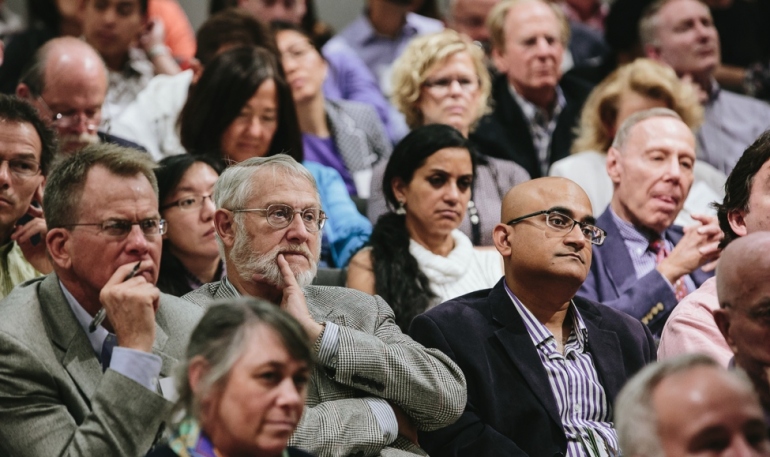 Byers Auditorium was standing room only all afternoon during the launch of the Rosenman Institute. Photo by Eugene Borodin

A record-breaking turnout—with more than 550 registered—packed Byers Auditorium and spilled into an overflow room at UCSF Mission Bay on Wednesday, June 4 for a symposium on how to help patients and solve surgeons’ problems by developing medical devices.

The event was the first ever at UCSF to focus on medical devices, and served as the launch of the Rosenman Institute, a venture whose founding partners envision one day having the impact of Mountain View’s world-famous Fogarty Institute for Innovation.

It was named for the late Dan Rosenman, a medical device engineer. Ron Leuty, a reporter at the San Francisco Business Times, described the Institute’s origins in a January 30 story:

Rosenman, who over a 25-year career led R&D efforts for a number of startups, including BioCardia Inc. of San Carlos, died in August 2013 from a heart attack while bicycling at Lake Tahoe.

So when [QB3 director Reg] Kelly a few weeks later saw many people from the close-knit medical device world at a celebration of Rosenman's life, "he thought this is a good idea to tap into," said Rosenman's widow, Christine Winoto, who also is the assistant director for strategic planning at QB3.

The Rosenman Institute aims to link entrepreneurs — who Winoto said have been involved in crafting medical devices from head to toe — with savvy surgeons and bioengineers to accelerate the development of devices…. Although cheaper and quicker than developing a drug, the route for taking a medical device from idea to product hasn't always been smooth. Surgeons are on the front lines and able to spot product gaps, but they often know little about bioengineering; likewise, engineers are great at building products but don't have insights into whether a device is needed or wanted in the clinic.

Stephanie Lee of the San Francisco Chronicle explained in a recent story how the new institute would triage proposals and broker connections to get entrepreneurs the help they need:

The Rosenman Institute, which is also being led by UCSF's bioengineering and surgery departments, will connect faculty from inside and outside the university with a network of volunteers who know how to commercialize devices: engineers, regulatory experts, clinical-trial designers, intellectual property attorneys and marketing specialists. A dedicated [incubator] is in the works.

Xconomy reporter Bernadette Tansey also noted the expertise on tap, and where it would come from:

Startups … will be advised by more than a dozen volunteer industry experts who quickly signed up to help in Rosenman’s honor. The members are now called the Rosenman Fellows.

“They’re all Dan’s friends,” says Winoto, who is spearheading the project.

A principal challenge for the Rosenman Institute’s leaders is to market its services to surgeons and entrepreneurs and let them know how the institute can help them. Making a splash was the point of the launch symposium, and the mission was accomplished, if the registration and turnout were anything to go by.

For QB3 it was also our first major event in which audience members tweeted enthusiastically. The hashtag #rosenman flooded Twitter throughout the event.