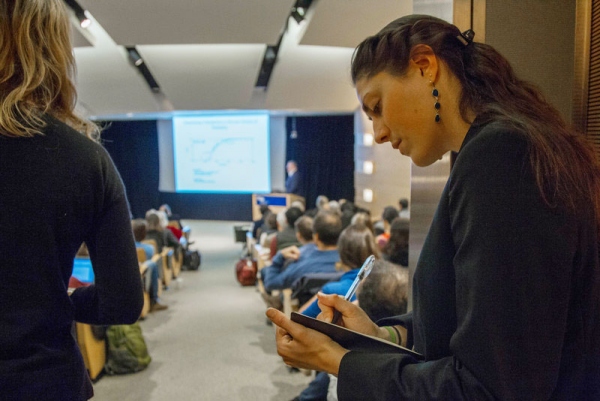 Sky Feuer, a third-year graduate student of biomedical science, listens to a presentation during the daylong Breakthrough

“We’re in for a thrill,” said Chancellor Susan Desmond-Hellman, MD, MPH, as she kicked off a special day-long symposium recognizing the winners of the 2014 Breakthrough Prizes in Life Sciences at Genentech Hall’s Byers Auditorium on Dec. 13. It was the centerpiece of a two-day celebration hosted by UCSF.

The morning got off to a rousing start with a talk about advancements in cancer genetics. The disease was a mystery when Bert Vogelstein, MD, began his career in the mid-1970s.

Though President Richard Nixon had declared a metaphoric “war on cancer,” the scientific community “didn’t know who the enemy was,” said Vogelstein, director of the Ludwig Center for Cancer Genetics and Therapeutics at Johns Hopkins School of Medicine. 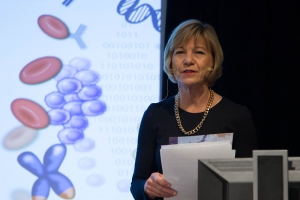 to the daylong symposium.

Forty years later we know our enemy well, he said, having identified about 150 driver genes that exert their effects in about 12 pathways.

In a lecture peppered with military metaphors, Vogelstein said we have moved past the “conventional warfare” of chemotherapy to targeted therapies, and have recently been “recruiting the allies” of the immune system. But it is crucial, he said, to begin “pre-emptive strikes.”

If Plan A of the War on Cancer was finding a way to cure advanced cancers, he said, it is time to initiated Plan B: identifying biomarkers of very early cancers and eliminating them from the body before they take hold and metastasize.

The Mystery of Cancer Metastasis

In keeping with Vogelstein’s historical approach, Robert Weinberg, PhD, Daniel K. Ludwig Professor for Cancer Research at the Whitehead Institute in Cambridge, Mass., presented a masterful history of cancer biology beginning with the discovery of the first oncogenes in experiments with carcinogenic chemicals. 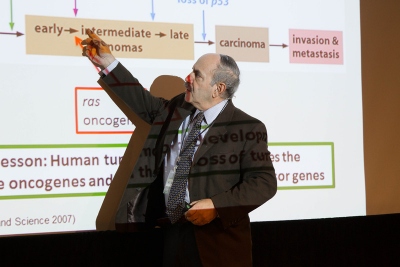 Robert Weinberg, PhD, takes the audience through a detailed history of cancer

biology at the 2014 Breakthrough Prizes in Life Sciences.

Over the course of 40 years we have gained a fairly good understanding of carcinogenesis and tumor formation, he said, but our knowledge is still lacking when it comes to the underpinnings of cancer metastasis.

Weinberg believes the answer lies in the process discovered by developmental biologists known as the epithelial-mesenchymal transition. Presented the newest work from his lab based on that perspective, he said the biggest remaining question about metastasis is, “How do cancer cells make a living in the distant tissues in which they seed themselves?”

Lewis C. Cantley, PhD, of Weill Cornell Medical College, drew links between diabetes, obesity, and cancer via his pathbreaking research on the PI3K pathway, which regulates insulin signaling but also plays a role in numerous cancers. 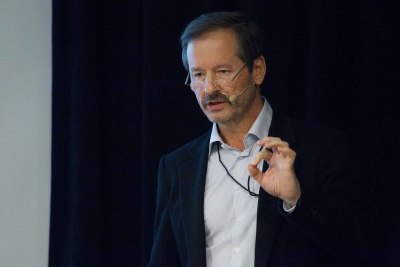 between diabetes, obesity and cancer.

In addition to a review of the state of PI3K-related science, Cantley presented compelling clinical anecdotes on the promising response seen in some patients to inhibitors of the PIK3 pathway as well as a sister pathway, mTOR. In a provocative conclusion he mused, “Could metformin” – one of the most common drugs used to treat type 2 diabetes – “be our best cancer drug?”

A major player in the development of the targeted drug Gleevec, Charles L. Sawyers, MD, of Memorial Sloan-Kettering Cancer Center recalled the first clinical trials of Gleevec, a drug that was designed specifically to treat Philadelphia chromosome-positive chronic myelogenous leukemia. The results in patients, he said, “were the most miraculous thing I’d ever seen.”

When Gleevec resistance developed in some patients, Sawyers and colleagues set out to develop a new version. It took 41 years from the first discovery of the Philadelphia chromosome to the clinical use of Gleevec, Sawyers said, but only 5 years to release a new drug that overcame Gleevec resistance.

Sawyers ended with a plea to scientists, patients, and the public to shake up the system in the manner of the HIV activists of the 1980s so that combination trials of novel cancer agents can break the stranglehold of iterative single-agent trials that dominate cancer research today.

Search for a Cure

Napoleone Ferrara, MD, who recently joined the faculty at UC San Diego after a long career at Genentech, where he spearheaded the development of the anti-angiogenic drug Avastin, reviewed the long history of research on angiogenesis—the growth of new blood vessels that tumors need to grow – and cancer. He also described the field’s maturity, as drugs that stanch the blood supply to tumors have entered the clinic for the treatment of numerous cancers.

David Botstein, PhD, talked about the importance of using

yeast as a study organism to understand human cancers.

Aberrant blood vessels also cause blindness in age-related macular degeneration (AMD), and Ferrara said that wide availability of the anti-angiogenic agent ranibizimab could conquer AMD, now the leading cause of blindness in the developed world.

Another Genentech alum, David Botstein, PhD, now director of Princeton University’s Lewis-Sigler Institute for Integrative Genomics, presented an impassioned—and humorous—manifesto for the importance of using yeast as a study organism to understand human cancers. “Everything but the cell wall,” Botstein said, “is shared by animal cells and yeast.”

He presented experiments employing the chemostat, an experimental setup in which various nutrients can be continuously supplied to or withheld from yeast populations. Using this method, Botstein and colleagues have observed the evolutionary trajectories of genes that have been identified as driver or passenger genes in human cancers.

The Advantage of Data

Eric S. Lander, PhD, believes in the importance of decoding

the vast amount of information in the genome.

Eric S. Lander, PhD, of the Broad Institute of MIT and Harvard, has had a front-row seat in the genomic revolution. Once, he said, “the only data that mattered were in your lab notebook. Today, almost every experiment is based on vast amounts of data housed elsewhere.”

The 1980s were devoted to systematic discovery of disease genes in families, populations, and tumor tissue, and the 1990s to placing the principles that had been established into practice. The 2000s must be devoted to decoding the vast amount of information in the genome, including its “surprises,” such as that regulatory sequences vastly outnumber protein-coding gene sequences.

More than 3,000 genetic loci have been implicated in more that 225 human diseases, he said, and the rate of discovery of cancer-associated genes shows no sign of slowing down anytime soon.

Despite the worm’s relative simplicity compared to humans, she said, many the same genes and neurotransmitters that figure into human neuropsychiatric disorders are at work in C. elegans. The ability to atomize the worm’s behaviors and actions and definitively tie them to specific neurons and genes is immensely powerful.

“The worm is a limerick, and the human brain the works of Shakespeare,” she said. “But the words are the same.”

Hans Clevers, MD, PhD, of the Hubrecht Institute in The Netherlands complemented his remarks on intestinal stem cells with stunningly beautiful animations. His lab has created intestinal “organoids,” miniature cellular assemblages with structural and anatomical features that mimic the intestine. These organoids can be used for drug screening, and perhaps could be one day be stored in “biobanks” for transplantation into the intestine for cell therapy.

UCSF’s own Shinya Yamanaka, PhD, wrapped up the proceedings with a snapshot of current research on induced pluripotent stem cells (iPS cells). Although iPS cells are generally associated with regenerative medicine, in which new, genetically matched tissues and organs could be generated to treat disease, Yamanaka said that he believes the most immediate impact will come in the form of disease models and drug screening. By creating iPS cells from a patient’s own cells, it will be possible to grow cells with disease mutations in culture and to test various drug compounds in using rapid high-throughput tools.

The winners of the 2014 Breakthrough Prizes in Life Sciences had been announced the previous evening, and the symposium’s previous winners took the stage and offered their views on the past, present, and future prospects of biomedical research.