A $750,000 gift from the John and Marcia Goldman Foundation is spurring a UCSF-led effort to create the first implantable artificial kidney for patients with kidney failure.

The new funds, which augment a $2.25 million grant for the project from the National Institutes of Health (NIH) this summer, will enable the team of bioengineers, physicians and scientists to conduct the critical research needed to bring the proposed device to clinical trials by 2017.

“Kidney failure takes a terrible toll on the world, both economically and in human suffering,” said Shuvo Roy, PhD, an associate professor in the UCSF School of Pharmacy who is leading the Kidney Project through the UCSF Department of Bioengineering & Therapeutic Sciences. “These funds are a critical step in helping us move this project forward more quickly and ultimately bring real solutions to patients throughout the world.”

Working with the project’s medical director, William Fissell, MD, at Vanderbilt University, UCSF’s Roy is coordinating researchers in nine institutions nationwide to create an implantable device that aims to mimic the filtration functions of a kidney, as well as its ability to maintain water and salt balances, produce Vitamin D, and regulate blood pressure and pH.

Roy estimates that the project will require an additional $13 million to bring that technology through the range of tests needed to enter clinical trials in humans.

The Kidney Project has been identified as a campus priority by UCSF and the UCSF School of Pharmacy for its potential to develop a breakthrough therapy to help solve a pressing health need. The school focuses on therapeutics, including medical devices and diagnostic tests, in addition to medications.

The Goldmans said they contributed to this unique research because of the project’s specific goal of addressing the dire shortage of donated kidneys and eliminating the need for dialysis.

“We know how debilitating dialysis is, and how few options are available for people with kidney failure,” said Marcia Goldman, who directed the gift with her husband through the John and Marcia Goldman Foundation. “The opportunity to be part of a potential solution of this scale was very appealing to us.”

Roughly 2 million people worldwide live with end-stage renal disease (ESRD), commonly known as chronic kidney failure, including 600,000 Americans — a figure that is rising 5 percent per year in lockstep with the growing rate of diabetes. The disease is best treated via a kidney transplant, yet fewer than 18,000 of the 93,000 people on the transplant waiting list will actually receive an organ this year, and those who do are likely to need a replacement within 10 years. 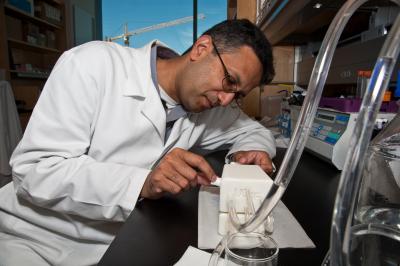 As a result, roughly 400,000 Americans with ESRD survive on dialysis, which comes at a high price: the U.S. Medicare system spends upwards of $29 billion per year, or 6 percent of its total budget, to treat kidney failure, including $24 billion each year to pay for dialysis. Only 34 percent of dialysis patients survive beyond five years.

The UCSF team has used silicon technology from the computer industry to design a nano-filter for the first compartment of the device, which would offer the same level of filtration as dialysis in a box smaller than a coffee cup. A second compartment would hold live kidney cells that perform the other biological actions of a real kidney.

The entire device would be implanted in the abdomen and powered by the body’s blood pressure, without a need for external pumps or tubes. The device also is designed to be used without the immunosuppressant drugs needed in transplants.

Earlier this year, the project was selected by the U.S. Food and Drug Administration (FDA) as one of the first three pilots for a collaborative FDA review process, which aims to address potential regulatory obstacles for the device up front, before it enters the approval process. The Kidney Project was chosen for its transformative potential in treating chronic kidney failure, a major health concern.

The Goldman support is the largest philanthropic grant to date for the project, which has drawn support from a number of individuals throughout the world, as well as grants from the NIH, NASA and the U.S. Department of Defense.

The UCSF School of Pharmacy is the nation’s premier, graduate-level pharmacy school, the oldest of its kind in the western United States, and a wellspring for discovery and innovation in the therapeutic sciences, education, and the pharmaceutical care of patients. Go here for more information.

UCSF is a leading university dedicated to promoting health worldwide through advanced biomedical research, graduate-level education in the life sciences and health professions, and excellence in patient care. Visit www.ucsf.edu.