A UCSF-led effort to create an implantable artificial kidney for dialysis patients has been selected as one of the first projects to undergo more timely and collaborative review at the Food and Drug Administration.

The artificial kidney project, which is targeted for clinical trials in 2017, was selected for its transformative potential in treating end stage renal disease and for its potential to benefit from early interactions with the FDA in the approval process.

The FDA effort will involve close contact between the federal agency and device developers early in the development process to identify and address potential scientific and regulatory hurdles and create a roadmap for project approval. The goal is to improve the projects’ overall chance of success, while reducing the time and cost of FDA review and maintaining safety. Lessons, the agency said, will inform approvals in other areas. 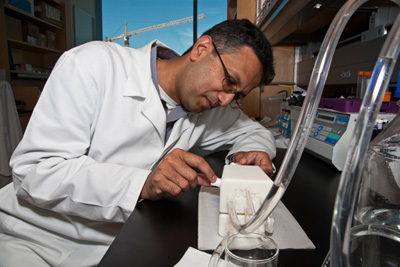 Shuvo Roy, PhD, is leading a project to develop an implantable artificial kidney.

The artificial kidney project has brought together 40 researchers in nine laboratories nationwide under the guidance of Shuvo Roy, PhD, a bioengineer on the faculty of the UCSF School of Pharmacy. It aims to combine nano-scale engineering with the most recent advances in cellular biology to create an implantable device that would enable patients with chronic kidney failure to lead healthier and more productive lives, without external dialysis or immune suppressant medication.

“The new Pathway program is a clear signal to researchers that innovations in how we treat disease are needed and supported by the FDA,” said Mary Anne Koda-Kimble, PharmD, dean of the UCSF School of Pharmacy. “We’re so pleased the Kidney Project is in the vanguard as the program launches.”

End-stage renal disease, or chronic kidney failure, affects nearly 2 million people worldwide, including more than 570,000 in the United States, and costs the nation almost $40 billion each year for treatment. The most effective treatment is kidney transplantation, but those organs are in short supply; last year, only 16,812 kidneys were available for transplant, leaving 92,000 patients on the waiting list, according to the Organ Procurement ant Transplant Network. 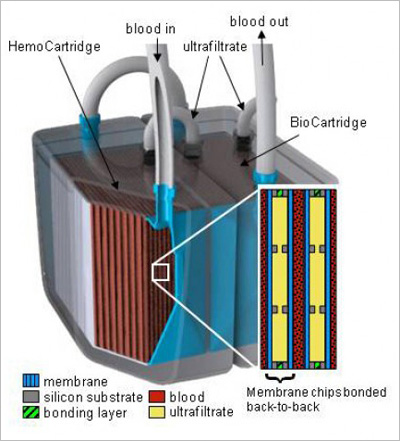 For projects like the artificial kidney, inclusion in the program could also build confidence among investors.

“This will help us with investors and funding agencies,” said Roy, who has met with several possible investors and granting agencies to fund the expected $20 million it will cost to bring the artificial kidney through clinical trials. “One of the questions we always get is, ‘How will the FDA handle this?’ With the Innovative Pathway program, we will know the answer to that question.”

The UCSF artificial kidney, or implantable Renal Assist Device (iRAD) would include thousands of microscopic filters as well as a bioreactor to mimic the metabolic and water-balancing roles of a real kidney.

The combined treatment has been proven to work for the sickest patients using a room-sized external model developed by a team member at the University of Michigan. Roy’s goal is to apply silicon fabrication technology, along with specially engineered compartments for live kidney cells, to shrink that large-scale technology into a device the size of a coffee cup. The device would then be implanted in the body, allowing the patient to live a more normal life.