Personalized medicine and new gene discoveries in human disease were a focus of a daylong symposium hosted by the UCSF Institute for Human Genetics on the Mission Bay campus on Oct. 3. 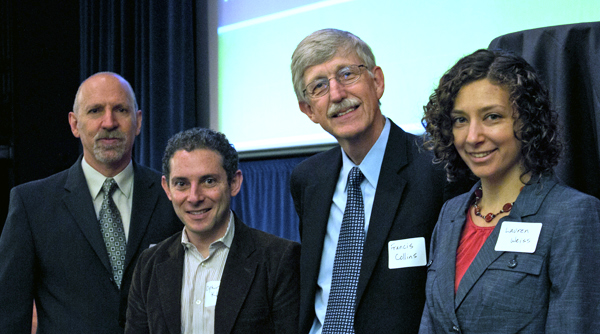 The now-annual symposium was convened to honor the late Charles J. Epstein, MD, a pioneer in the study and treatment of Down syndrome and other genetic diseases. Epstein’s advocacy led to the establishment of medical genetics as a field of specialized medicine. He died in February as a result of pancreatic cancer.

Epstein trained many leading geneticists, including several of the symposium speakers. Other speakers, such as Francis Collins, MD, PhD, director of the National Institutes of Health (NIH), were long-time friends and associates. 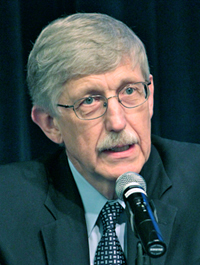 Collins, this year’s Charles J. and Lois B. Epstein Visiting Professor, gave a talk titled “Achieving Charlie’s Vision: The Science is Finally Catching Up with the Clinic.” Collins, who headed the Human Genome Project from 1993 to 2008, said that Epstein in his Down syndrome research pioneered the discovery of genetic and biochemical abnormalities that cause disease symptoms four decades ago, “when there were very few genes mapped to any chromosome.”

“Over the course of 40 years he brought together the clinical aspects of genetics and the research aspects in a way that has profoundly changed our understanding for all time and brought us into an era when clinical genetics, I think, has a remarkable future,” Collins said.

Through the Human Genome Project, researchers completely spelled out the DNA sequence of an entire human genome for the first time. That milestone, achieved in 2003, required more than a decade and nearly 3 billion dollars.

With ever-improving technology and analytic tools, the cost of reading out an individual’s genome has continued to plummet while sequencing has sped up enormously. Today, Collins said, “We are on a trajectory toward the $1,000 genome.”  In the not-so-distant future the cost of obtaining an entire read-out of an individual’s DNA for use in personalizing medical care might no longer be prohibitively expensive.

Within a year the NIH will make available for research purposes a database containing all the protein-encoding genes for 75,000 individuals, including complete genomic DNA sequences for many of them, Collins said. Making this data available to researchers should greatly aid efforts to identify genetic causes of disease.

Collins described newer NIH grant competitions that put young scientists, including geneticists, on the fast track so that they can quickly begin directing more creative research in their own laboratories. Two symposium speakers, Ophir Klein, MD, PhD, and Lauren Weiss, PhD, are each recipients of one of these grants, called the NIH Director’s New Innovator Award.

National Institutes of Health Director Francis Collins was among those to pay tribute to the late Charles Epstein, a UCSF pioneer who led successful efforts to establish medical genetics as a clinical specialty and trained may of today’s leading medical geneticists.

Klein discussed his research on stem cells in teeth and the intestinal tract. His work is leading to basic discoveries about how stem cell populations guide the fate of cells and tissues during development. Weiss described populations studies aimed at identifying genetic mutations that may be responsible for many cases of autism.

A morning panel discussion focused on the challenges of moving genetic discoveries into the clinic. Panel moderator Robert Nussbaum, MD, a UCSF medical geneticist, raised the issue of patents. Although the price of sequencing the human genome is dropping, roughly one-third of genes are patented. Payment of licensing fees in exchange for using genetic information obtained from a patient’s genome for diagnosis of diseases or for gauging disease risks or predicting responses to treatment might become more costly than the initial sequencing of the genome itself.

The argument that genes are products of nature — and therefore not eligible for composition-of-matter patents — has been revived. In a case that may be destined for the US Supreme Court, the US Department of Justice filed a friend-of-the-court brief arguing against patenting unaltered DNA, siding with the plaintiffs — the American Civil Liberties Union and the Public Patent Foundation. In 2009 the plaintiffs sued Myriad Genetics and the University of Utah Research Foundation, which patented the genes BRCA-1 and BRCA-2. Mutations in the genes cause a high risk for breast and ovarian cancer in women and prostate cancer in men, and Myriad Genetics sells tests for detecting mutations in these genes. A federal appeals court upheld the patent earlier this year.

The NIH has been working with the Department of Justice on the case, Collins said. “Whether in fact the existing patents, which claim composition of matter on genes, would in fact be infringed by whole genome sequencing -- you can get different opinions depending on which lawyer you ask,” he added. 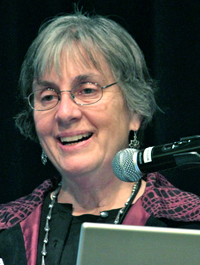 University of Iowa medical geneticist Val Sheffield, MD, PhD, described research leading to the discovery of a gene that is responsible for many cases of glaucoma. In glaucoma pressure builds up within the eye and leads to the destruction of retinal tissue and loss of vision. Sheffield helped track down an off-the-shelf drug to successfully treat the form of glaucoma caused by a mutation in the gene for the protein myocilin. The drug, sodium 4-phenylbutyrate, works by preventing cells from committing suicide in response to an overload of the incorrectly folded myocilin that otherwise arises due to the mutation.

The symposium was not entirely focused on disease. Greg Barsh, MD, PhD, of the HudsonAlpha Institute for Biotechnology in Huntsville, Alabama, described how he and other researchers are tracking down genes that control coat-color variation in some of humankind’s best friends, including brindle-coated dogs and calico cats. He also related how researchers solved the mystery of the agouti mouse. Possessing two copies of specific mutant gene is lethal, but the result of a single-copy mutation is a mouse that is big, fat and yellow-coated — and a friend to some researchers who study obesity. Barsh now has set his sights on zebra stripes and cheetah spots, aiming to discover the genetics behind their patterning.

In his concluding remarks Neil Risch, PhD, director of the Institute, said Epstein would have appreciated the event. “I feel like he would have been absolutely delighted and thrilled to see his colleagues — and especially his former trainees — come here and give such exceptional talks.”

“The progress in human genetics” has been “breathtaking,” Risch said. “We have seen a lot of examples of that today.”