New discoveries about human genetic variation are expected to guide medical practice at an ever-faster pace, and many genes associated with diseases already are known.

As a leader at UCSF and in the human genetics medical research community nationally and internationally, Charles J. Epstein, MD, now professor emeritus, has helped guide human genetics into the molecular age and into the spotlight of modern medicine.

Epstein has long been recognized for his achievements, but a new slew of honors have been bestowed upon him this year. Three of them – a major leadership award from the American Society of Human Genetics (ASHG), an endowed professorship and a new visiting professorship – were announced at a UCSF celebration in his honor in March. In July, the National Down Syndrome Congress awarded Epstein its premier award for research accomplishments.

Screening for disease genes was not yet on the horizon when Epstein came to UCSF in 1967. Soon after he arrived Epstein began advocating for a clinical genetics program. In 1968, he succeeded in garnering support for the establishment at UCSF of one of the first clinical practices dedicated to medical genetics on the West Coast. 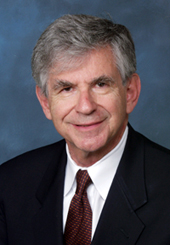 Under Epstein’s leadership, the genetics clinic at UCSF began to integrate clinical service, training and research programs. The genetic counseling services established at the clinic became the model for similar services that now exist throughout California and the nation.

Epstein has led major professional organizations, been the chief editor for leading scientific journals and authored award-winning textbooks. He has trained generations of physicians, genetic counselors and research scientists, and counseled and cared for families in which children have been born with syndromes resulting from genetic errors, such as Down syndrome.

According to Robert Nussbaum, MD, a member of the UCSF Institute of Human Genetics and a former president of the ASHG, “Charlie did that with quiet determination and leadership that was really remarkable to see.”

The reorganization entailed growing pains. A Residency Review Committee for Medical Genetics was established and took over the role of certifying training programs, sanctioned by the Accreditation Council for Graduate Medical Education.

Genetic counselors were not accepted into the newly certified specialty, and formed their own governing bodies. But their independence to shape their own training and certification programs, Epstein says, “is probably the best thing that could have happened.”

According to Joann Boughman, PhD, executive vice president of the ASHG, Epstein “made sure that both groups survived and prospered.”

Epstein has personally trained more than 100 genetic counselors, as well as more than 100 residents and postdoctoral fellows in medical genetics.

Research on Down Syndrome

Epstein’s own research emphasized studies of the cellular and biochemical aspects of genetic disorders. For birth defects he popularized the term “inborn errors of development,” placing a research emphasis on understanding the biochemical events that result in the observed manifestations of these syndromes.

Epstein’s studies have shed light on several genetic disorders, but as a scientist he may be best known for his research on Down syndrome. Epstein’s drive to discover the biochemical basis for aspects of Down syndrome – caused by an extra copy of human chromosome 21 –- led him, his wife, Lois Epstein, MD, and postdoctoral fellow David Cox, MD, PhD, to develop the first useful rodent model for the disorder. The model allowed the researchers to begin to home in on genes and proteins that play a role in Down syndrome – the most common genetic cause of developmental delay.

Eventually Epstein’s research team and his collaborators were able to implicate the amyloid precursor protein as a cause of neurological abnormalities in a mouse model of Down syndrome. The accumulation of this same protein in the brains of Alzheimer’s disease patients appears to play a role in that degenerative disorder, which also commonly afflicts long-lived individuals with Down syndrome.

Discovery of genes that play a role in diseases such as Down syndrome may lead to new targets for therapy.

After realizing the long-held dream of seeing the Institute for Human Genetics become an organized research unit at UCSF, one that has been very successful in recruiting leading researchers in the field – including Nussbaum and current director Neil Risch, PhD – Epstein retired from UCSF in 2006.

Four years later, Epstein continues to be honored for a lifetime of achievements in research and medicine.

In March, Epstein was feted during an event at the UCSF Faculty-Alumni House, where he accepted the 2010 ASHG McKusick Leadership Award.

In citing the reasons for honoring Epstein, Boughman wrote, “Beyond establishing a model medical genetics clinic and enhancing the fields of biochemical and clinical genetics, Charlie helped establish and legitimize the profession of genetic counseling.”

Arno Motulsky, MD, professor of genome sciences at the University of Washington and a founder of the field of medical genetics in the 1950s, presented the award. Prior to Epstein’s coming to UCSF, Motulsky mentored him during a clinical and research fellowship.

“His farsighted leadership and vision ensured that the field of medical genetics flourished and was successfully assimilated into the broader context of science, medicine, and health,” Motulsky says.

The McKusick Award is not the first award that Epstein has received from the ASHG. In 2001, he received the William Allan Award, the society’s highest recognition for research excellence.

The same March event marked the inauguration of the Charles J. Epstein Chair in Human Genetics and Pediatrics, sponsored by the Department of Pediatrics and the Institute for Human Genetics at UCSF. Anthony Wynshaw-Boris, MD, PhD, who was recruited from UC San Diego following the establishment of the Institute – and who replaced Epstein as the chief of the Division of Genetics within the Department of Pediatrics – was named to be the first to hold the chair.

Lois Epstein, MD, also professor emerita, was a longtime faculty member and leading cancer researcher at UCSF and a major collaborator in the research on Down syndrome. Both Epsteins were honored through the establishment of the Charles and Lois Epstein Visiting Professorship, which was announced the same evening.

Epstein has received numerous other honors during the course of his career. He is a member of the Institute of Medicine and a fellow of the American Academy of Arts and Sciences. In addition to serving as president of the ASHG, Epstein has been president of the American Board of Medical Genetics and chairman of the Residency Review Committee for Medical Genetics. For seven years he was editor of the American Journal of Human Genetics, the premier scientific journal in the field. He has been on many advisory panels, including the National Down Syndrome Society Science Advisory Board, which he chaired from 1979 to 2000.

Epstein also was a member of the Recombinant DNA Advisory Committee (the RAC) of the National Institutes of Health (NIH) from 1985 to 1990, when the committee was considering protocols for the first gene therapy trials. Epstein says the review process helped ensure both scientific quality and patient protection, and he disagreed with a later NIH decision that weakened the committee’s oversight role.

Epstein graduated from Harvard College and Harvard Medical School, and trained in internal medicine at the Peter Bent Brigham Hospital in Boston. After completing a medical genetics fellowship with Motulsky at the University of Washington, he worked as a biochemistry researcher with Christian Anfinsen, PhD – a later recipient of a Nobel Prize—at the NIH. 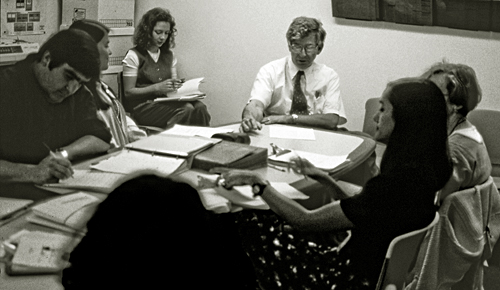 Epstein graduated from medical school in 1959, in the same decade that James Watson and Francis Crick figured out how DNA could encode heritable genes. The number of human chromosomes had only recently been determined with certainty. When he joined the UCSF faculty in 1967, genetic defects – those that could be detected – were still discovered by looking at preparations of whole chromosomes fixed to microscope slides. There were no tests for genetic disorders on the much smaller scale of individual genes.

“I used to tell my students that when I started medical school we had 48 chromosomes, and when I left we had 46 – and things have been changing at a tremendous clip ever since then,” he says.

Professionals who are thoroughly trained in medical genetics play a vital role in helping families affected by genetic disorders to cope successfully with scientific information and with their difficult circumstances. That’s a service that should not be overlooked – especially now, at a time when an ever greater number of risk genes for complex diseases are being discovered, and as the interpretation of increasing amounts of genetic data is becoming more complex, Epstein says.

Epstein found in his clinical practice that parents of newborn children with Down syndrome, confronted with a multifaceted disorder baffling even to scientists, often felt overwhelmed – perhaps thinking that they must comply with a complex protocol in order to succeed as parents.

Epstein sought to inspire hope and confidence when giving advice, with an emphasis on the simple and most essential. “Take that child home, and care for and love that child as you would any other,” he would say.

Epstein’s lifelong, productive career, ultimately aimed at relieving suffering, was temporarily derailed in 1993, when a package bomb sent to his home by an anti-technology terrorist, the “Unabomber” Theodore Kaczynski, exploded in his hands. Kaczynski’s bombs killed three people and wounded several others. To spare himself from the death penalty, rather than choosing to continue to justify his actions in court, Kaczynski agreed to a plea bargain and now is serving a life sentence.

Epstein has often been asked about this episode. In speaking to physician scientists, he has framed the incident, despite its senselessness, as a reminder of the importance of communicating to members of the general public the value of one’s research. Scientists have responsibilities that go beyond the professional, Epstein says.

On a personal level, he notes his relief that his wife and daughter – the youngest of four children and still living at home at the time – were not standing next to him when he opened the package.

And with a near loss of life one’s appreciation for life often intensifies. “If there is something you know that you really want to do, do it now,” Epstein says, “because you never know when the opportunity will be gone.”

Epstein himself has accomplished a great deal in a career spanning more than four decades. As Epstein told the roomful of admiring friends, family members and colleagues at the March celebration, “For a human geneticist, I can’t think of a better ride.”

D is for Down Syndrome
UCSF Magazine, August 2002