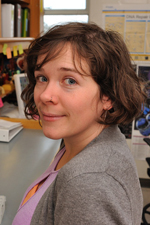 A UCSF-led team has discovered at least one key reason why blood stem cells are susceptible to developing the genetic mutations that can lead to adult leukemia. Their finding also may explain, they say, why some other age-related hematological disorders develop.

The study, reported in “Cell Stem Cell” (Aug. 6, 2010) and reviewed in Cell Stem Cell and Cell, opens a new frontier for studying the molecular underpinnings of adult leukemia.

The discovery also suggests a possible therapeutic strategy, the scientists say, for reducing the risk of leukemia that results from chemotherapy used to treat solid tumors.

Finally, it may explain why other types of adult stem cells are susceptible to accumulating potentially lethal mutations.

Blood stem cells, located in the bone marrow, give rise to all blood cells of the body, such as red blood cells, white blood cells, and platelets. During fetal development, the stem cells specialize, or differentiate, into these various cell types. During life, they incessantly repeat the process, replacing old or depleted blood cells. The population also continuously self-renews.

Like most other adult stem cells, blood stem cells maintain a resting, or “quiescent,” state when they are not differentiating or self-renewing. They do so to minimize stress caused by cellular respiration and errors in DNA replication, which can lead to DNA damage.

In the current study, conducted in the culture dish and mice, the team set out to determine if blood stem cells in the quiescent state were at greater risk for incurring genetic mutations in the process of repairing damaged DNA than were proliferating cells. Scientists have known that defects in DNA repair processes are associated with cancers, though they have known little about the mechanisms.

The team determined that both quiescent and proliferating blood stem cells have protective mechanisms ensuring their survival in response to exposure to ionizing irradiation, as occurs from such sources as the sun and X-rays.

Quiescent cells, on the other hand, use a mechanism known as nonhomologous end joining-mediated DNA repair, which often leads to misrepair of double strand breaks in the DNA. Such error prone repair can result in chromosomal deletions, insertions or translocations and subsequent genomic instability that can contribute to hematopoetic abnormalities. This, too, was documented in the study. The quiescent cells are limited to using the error prone NHEJ mechanism because of the constraint imposed by their cell cycle on the molecular composition of their DNA repair machinery.

“Our results demonstrate that quiescence is a double-edged sword, protecting hematopoetic stem cells from cellular stress but rendering them intrinsically vulnerable to mutagenesis following DNA damage,” says senior author Emmanuelle Passegué, PhD, associate professor of medicine (division of hematology/oncology) and a member of the Eli and Edythe Broad Center of Regeneration Medicine and Stem Cell Research at UCSF.

The finding, the result of “heroic” research begun four years ago by Mary Mohrin, a graduate student in the Passegué lab, upturns current dogma, says Passegué. “The thinking has been that blood stem cells must proliferate to acquire the mutations that drive tumor development. This work says, ‘not so.’”

While the repair mechanism used by the quiescent cells is defective, it is not detrimental for the body in evolutionary terms, says Passegué. “The blood stem cell system is designed to support the body through its sexually reproductive years, so the genome can be passed along. The ability of quiescent blood stem cells to quickly undergo DNA repair supports this goal, and the risk of acquiring enough mutations in these years to cause genomic instability is minimal.”

The problem occurs with age, she notes, as the cells have spent a lifetime responding to naturally occurring insults and the effects of X-rays, medications and chemotherapies.

On the positive side, she says, the finding suggests a strategy for reducing the risk of leukemia resulting from chemotherapy used to treat solid tumors. “Existing drugs, such as G-CSF and prostaglandins, could be used to induce hematopoetic stem cells to proliferate prior to the use of therapy with DNA damaging agents,” she says. “This could enhance DNA repair fidelity and reduce the risk of leukemia development.” She is discussing this possible tactic with UCSF clinical researchers.

On a lighter note, she reflects, “our discovery may be good PR for blood donations.” While acknowledging her rationale is a bit speculative, she says, “Bleeding is a good way to keep the blood stem cell pool in an active, or proliferative, state.”

Lead author Mohrin is funded by a pre-doctoral training grant from the California Institute for Regenerative Medicine. Other funding for the study included a CIRM New Investigator Award and Rita Allen Scholar Award to Passegué, a U.S. Public Health Service grant to Le Beau, and a Science Foundation Ireland award to Morrison.