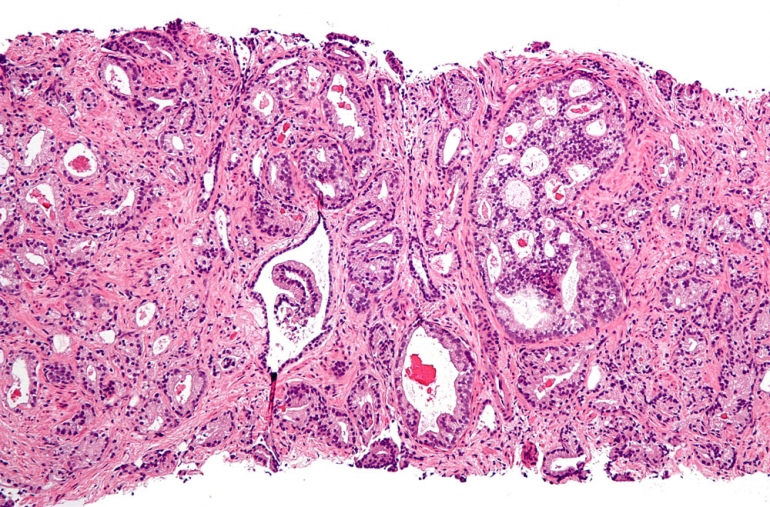 A new study of prostate cancer in 202 men, whose cancers had spread and were resistant to standard treatment, found that a surprisingly large number of these cancers – about 17 percent – belong to a deadlier subtype of metastatic prostate cancer.

Previously, it was thought that these cancers constituted less than 1 percent of all prostate cancers.

The study, which was led by researchers at UC San Francisco and published online July 9 in the Journal of Clinical Oncology, suggests that this prostate cancer subtype, called treatment-emergent small cell neuroendocrine prostate cancer (t-SCNC), might in the future be routinely and more successfully treated with targeted drugs that already are being developed or tested in clinical trials.

“Think of advanced, hormone-treatment-resistant prostate cancers as a pie,” said Rahul Aggarwal, MD, assistant professor of medicine in the UCSF Division of Hematology and Oncology and the study’s corresponding author. “Instead of treating these advanced cases homogenously as we do with today’s standard treatments, we want to split the pie according to tumor characteristics, and develop treatment protocols tailored to individual slices, based on the cancers’ distinctive growth-driving genetic mutations and gene expression patterns.”

The research team identified specific genetic mutations and patterns of gene expression that are found in t-SCNC, but are distinct from the more common type of prostate cancer known as adenocarcinoma. Among the patterns identified in t-SCNC was higher activity of specific “transcription factor” proteins – proteins that switch on production of other proteins that drive cancer growth.

Two of the transcription factors over-activated in t-SCNC are targets of drugs already in clinical trials, Aggarwal said, with several more in pre-clinical testing. Aggarwal is a member of the UCSF Helen Diller Family Comprehensive Cancer Center.

In contrast, mutations that previously have been discovered to play a role in many adenocarcinomas were almost never present in t-SCNC, the researchers found.

Treatments targeting specific mutations in prostate cancer are not yet available in standard practice, which relies on hormonal treatment and chemotherapy as the mainstays of treatment. However, as the number of targeted treatments available for cancer grows, genetic analysis of tumors is expected to become increasingly valuable in helping to guide treatment.

“Obtaining tumor biopsies in metastatic cancer has not in the past been the standard of care, but it is being done more often, in part to look for neuroendocrine tumor cells, but more generally to get an idea for what mutations are driving cancer growth,” Aggarwal said. “This trend has lagged in prostate cancer because most metastasis occurs in bone, and it is more difficult to do biopsies in bone in comparison to other tissues.”

The American Cancer Society estimates that 29,430 men will die from prostate cancer in 2018, making it second only to lung cancer as a cause of cancer death among U.S. men. About one in 10 prostate cancers has spread beyond the prostate at the time of initial diagnosis and is more difficult to treat successfully.

“It is important to provide hormonal therapy in metastatic prostate cancer, because these hormonal treatments prolong survival,” Aggarwal said. “But they are not curative. In nearly every patient the cancer will become resistant to these treatments. It’s just a matter of when. We want to know why prostate cancer becomes resistant, and we believe the emergence of t-SCNC is one important mechanism through which they evolve and evade treatment.”

The study, which was undertaken by a consortium of five different academic medical centers, enrolled patients at the time their cancers were discovered to have become resistant to conventional hormonal treatment, known as androgen deprivation therapy.

Among patients who had previously stopped responding to second-line hormonal treatment with abiraterone or enzalutamide — drugs usually administered when initial hormone therapy fails — men with the t-SCNC subtype survived on average just 36.6 months, compared to 44.5 months for men without t-SCNC. Three-quarters of men in the study had received one or both these drugs.

“An understanding of the biology of this important mechanism of resistance is essential to our developing novel therapeutics designed to prevent the development of this lethal prostate cancer subtype, or, once developed, to effectively treat it," said senior author Eric Small, MD, professor of medicine and chief of the Division of Hematology and Oncology at UCSF. Small is also deputy director of the UCSF Helen Diller Family Comprehensive Cancer Center.

In 160 of the men, there was enough tumor in biopsy specimens to classify the cancer, which was done independently by three different pathologists blinded to clinical and genetic characteristics of the cancers. They found t-SCNC in specimens from 27 of these men. The researchers surveyed genetic mutations and gene activation within tumor cells and identified patterns of genetic mutations that were associated with t-SCNC and with worse survival.