In his fourth annual State of the University address, Chancellor Sam Hawgood, MBBS, announced the launch of UC San Francisco’s first comprehensive fundraising campaign in more than a decade, which leverages “the transformational power of our community.”

State of the University 2017

Watch the full State of the University address from Oct. 27, including the chancellor’s speech from Cole Hall and a presentation from Byers Auditorium.

Hawgood’s address, delivered at a special event Friday that spanned both the Parnassus and Mission Bay campuses, laid out the vision for UCSF: The Campaign, which aims to raise $5 billion to “help sustain UCSF’s excellence and build for its future.”

The campaign will support faculty through increasing UCSF’s endowment and support students by securing more scholarships, and it focuses on three grand challenges: decoding life to improve health, leveraging discovery to revolutionize care and partnering to achieve health equity.

UCSF is uniquely positioned to take on such challenges because of the opportunities that currently exist in the Bay Area at a time of great innovation, Hawgood told the audience in Cole Hall in a speech that was simulcast to Byers Auditorium at Mission Bay.

“Our ability to understand the mysteries of biology and the fundamentals of health is undergoing a rapid, perhaps unprecedented, acceleration,” he said. “It is a time of dramatic knowledge creation, discovery and technology revolution – it’s a true inflection point in history. It is a time of radical change in our expectations of wellbeing and longevity. And it is a time of great global challenges that offer world-changing opportunities.”

Hawgood shared a number of milestones and accomplishments from the past year that reflect why he is optimistic about UCSF’s future.

Among the institutional accolades, UCSF Medical Center was named the fifth best hospital in the nation, UCSF Benioff Children’s Hospitals in San Francisco and Oakland ranked among the country’s best in several specialties, and the nursing staff at UCSF Health again achieved the prestigious Magnet Recognition designation.

Individually, M. Margaret Knudson, MD, FACS; and Dean Schillinger, MD, and Anais Amaya were honored by The San Francisco General Hospital Foundation with this year’s Heroes & Hearts Awards for going above and beyond the call of duty to provide innovations in care. David Julius, PhD, received the Gairdner International Award for his work determining the molecular basis of how we sense heat, cold and pain; and Ron Vale, PhD, received the Shaw Prize in Life Science and Medicine for his seminal research on motor proteins.

The year’s highlights also include new and expanded research groups. The interdisciplinary Quantitative Biosciences Institute within the School of Pharmacy demonstrates how the University is adapting to reflect changing social challenges and emerging opportunities in science, Hawgood said.

And the chancellor announced Friday the formation of the Institute for Global Health Sciences, led by Jaime Sepulveda, MD, DSc, MPH. “This new and expanded reorganization of our global health efforts will engage more faculty and more students in finding effective solutions to the world’s greatest global health challenges,” Hawgood said.

In planning for the fundraising campaign, Hawgood said a recurring theme that emerged from focus groups was that UCSF was “quietly amazing – perhaps too quietly.”

“The campaign offers a unique opportunity to shine a light on just how amazing UCSF really is, to begin to build a wider reputation for that humble excellence, and for what all of you accomplish every day,” he said.

At the core of the campaign is the people who make up UCSF, Hawgood said. To ensure that it reflected the community, the chancellor and his team spent over 15 months developing the themes with faculty, who submitted more than 180 ideas that were further refined by five faculty working groups. 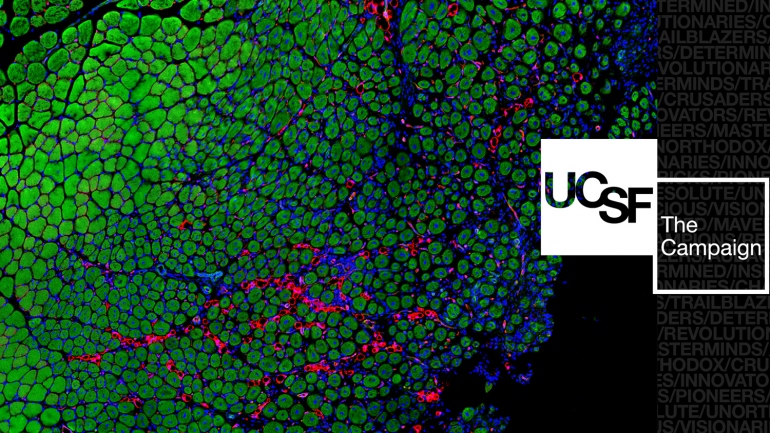 Hawgood explained that the campaign will significantly increase financial support for faculty and students. UCSF’s current $2.7 billion endowment generates annual payouts that account for only 2 percent of its operating budget; at institutions like Harvard, the endowment payout makes up closer to 40 percent. Currently, UCSF’s endowment can only give support to less than 15 percent of UCSF’s roughly 3,000 faculty and fund a fraction of the student scholarship targets.

Fundraising for the $5 billion campaign is well underway, with the “quiet phase” prior to Friday’s announcement raising $3 billion from more than 96,000 donors since July 2013, Hawgood reported. This includes the just-announced $25 million gift from David Mortara to the School of Nursing – the largest-ever gift to the school – which will establish the new Center for Physiologic Research.

Of the funds already raised, about 12 percent has gone toward facilities, primarily to complete the vision for the Mission Bay campus, which opened in 2003.

Hawgood recognized the need to begin improving facilities at the flagship Parnassus campus, noting that several internal studies have been initiated to begin crafting a vision that will inspire supporters: “We now stand ready to face the challenge of rejuvenating the facilities on Parnassus Heights so they match the excellence of the researchers, clinicians, students and staff who work on the campus.”

Speaking from Byers Auditorium, Hana El-Samad, PhD, associate professor and vice chair of the Department of Biochemistry and Biophysics, described how answering the most basic questions in biology has led to major health innovations, from recombinant insulin to engineered immune cells.

“We see a future where obtaining a comprehensive blueprint of life, deciphering its instruction manual, understanding its most fundamental and general principles, decoding its algorithms, is in the realm of the possible,” said El-Samad, who is also a member of the campaign executive committee. “Such discovery driven science is also a worthy investment in our future.”

Hawgood said UCSF will leverage its access to the latest technologies, big-data science and collaborations with industry partners to create new ways to care for patients.

“We will develop new drugs and novel treatments using next-generation tools and vast troves of data, including the more than 15 million UC Health patient records – perhaps the most ethnically diverse patient data repository available anywhere in the world. This data will help us create the very best care for one and all,” he said.

He highlighted the new Institute for Computational Health Sciences, led by Atul Butte, MD, and ImmunoX, a new concept that will leverage industry research partnerships to harness the immune system to fight disease.

Kirsten Bibbins-Domingo, PhD, MD, MAS, professor and chair of the Department of Epidemiology and Biostatistics and co-founder of the Center for Vulnerable Populations at Zuckerberg San Francisco General Hospital, spoke about the widening gap in health access caused by poverty and discrimination.

UCSF is capable of tackling today’s health inequities, just as it did in the 1980s in taking on the seemingly insurmountable AIDS epidemic, said Bibbins-Domingo. “It’s remarkable to see how far we’ve come. UCSF is now partnering with others in another landmark effort – actually getting to zero – zero new cases of HIV, zero new deaths from AIDS, and zero stigma.”

“The Bay Area should be a place where everyone’s life is determined by their own efforts and talents, unfettered by poor health,” she said. “UCSF can and will lead the way in achieving health equity for our region, and be a model for how this goal can be achieved elsewhere.”

Advocating for Health and Science

During his speech, Hawgood acknowledged the “unprecedented and unpredictable world in which we live” while also praising the many efforts among the UCSF community to stand up for its shared PRIDE values of professionalism, respect, integrity, diversity and excellence.

In the past month, Northern California was shaken by the deadly and devastating wildfires, in which more than 50 faculty, staff and students lost their homes.

Hawgood praised the response of UCSF faculty and residents who continued to provide care to their patients during the fires and after their clinic was badly damaged. He pledged support for UCSF community members affected by the wildfires.

In a year when the tragic events of Las Vegas and Charlottesville made the news, Hawgood reiterated that “UCSF absolutely and unequivocally condemns violence and intolerance.” The UCSF community – including the offices of Diversity and Outreach and the International Students and Scholars – also has supported faculty, staff and students who are immigrants and Dreamers so they can live and learn freely.

The chancellor also commended the many across UCSF who have joined the University’s expanded advocacy efforts, participating in the Stand Up for Science teach-in and rally in April, speaking out against proposed cuts to the National Institute of Health budget, and fighting for affordable, comprehensive health insurance coverage for all. “We will continue to advocate relentlessly for federal research funding, for a stable and functioning health care marketplace, for fair and equitable immigration policies and for state support of our mission.”

“As much as the campaign is about building our endowment, raising program support, and building facilities, it is equally vital to raise our voice,” he said.

“We are saving lives in our communities and solving problems around the globe. We are revolutionizing health and science. And we are speaking out for and serving the most vulnerable.”