In his first visit back to UC San Francisco since becoming a member of the San Francisco Board of Supervisors, Jeff Sheehy rallied the University community to join in fundraising for AIDS Walk San Francisco – especially as HIV funding is under attack at the federal level.

Sheehy, who served as communications director of the AIDS Research Institute from 2000 to 2017, joined UCSF HIV/AIDS leaders Diane Havlir, MD, and Paul Volberding, MD, at the UCSF Parnassus library to discuss their lives and careers in fighting HIV. 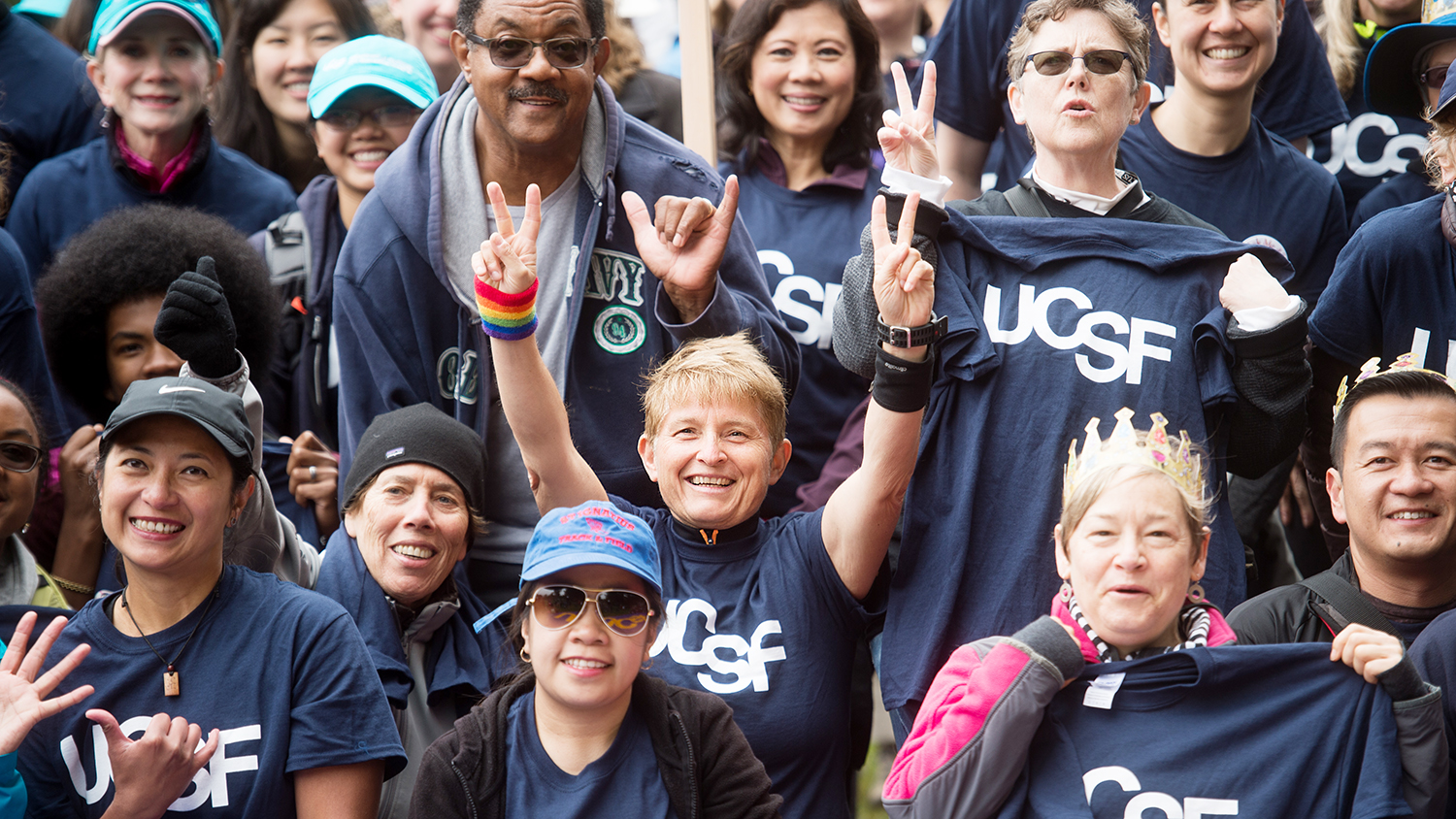 You can support AIDS Walk San Francisco by joining one of the many UCSF groups or by donating to a team.

The July 7 event was held in support of AIDS Walk San Francisco, the annual trek to raise funds for HIV programs and services in the Bay Area. UCSF is working toward an ambitious fundraising goal of raising $200,000 for the event, scheduled for July 16 in Golden Gate Park.

A Critical Time of HIV Funding

Sheehy said that supporting HIV/AIDS funding is part of maintaining critical health care infrastructure at time when under attack.

“AIDS Walk is part of the same struggle of us coming together with our values in solidarity to show the world that we’re still fighting, still marching, and still walking,” said Sheehy. “We need to get everyone we know to walk because we all have to be in this fight together.”

In the Bay Area, AIDS Walk SF plays a significant role in the backing of local organizations, including the Golden Compass program, which is located at Ward 86 at Zuckerberg San Francisco General Hospital. It was in that ward that UCSF launched the world’s first HIV/AIDS outpatient clinic.

The Devastating History of HIV

During his visit, Sheehy spoke to the overwhelming toll of HIV/AIDS on San Francisco – and the University’s inspired response – since the epidemic arrived in 1980.

“When (the epidemic) hit, the people of UCSF and the people of this city ran towards the fire, they didn't run away,” said Sheehy. “At great risk to themselves and their families, they embraced a shunned community.”

UCSF has since led HIV/AIDS care globally, including Ward 86, by Volberding and others; the discovery of the AIDS virus, HIV, by Jay Levy, MD; and more recently in advocacy to legalize HIV-to-HIV organ transplants by Peter Stock, MD, and achievement of UNAIDS targets in East Africa by Havlir and team.

Sheehy, the first openly HIV-positive supervisor in San Francisco’s history, knows about UCSF’s work in HIV firsthand. Like an increasing number of others living with HIV, Sheehy is a long-term survivor.

“I wouldn’t be alive without the (HIV/AIDS) work that’s been done at UCSF,” said Sheehy. “Golden Compass is a phenomenal start to treat people like me who are getting older with HIV and have so many comorbidities.”

Havlir, chief of the HIV, Infectious Diseases and Global Medicine Division at UCSF, arrived as a medical resident at UCSF in 1984, shortly after the epidemic emerged in San Francisco.

“I saw all these young men whose potential had been destroyed with this illness,” she said.

Havlir led early studies of antiretroviral therapy (ART) – an effective treatment for HIV – that led to its widespread use in the mid-1990s.

“The data suggested we should be treating everyone with HIV,” she said. “Not just waiting until they get sick.”

Havlir recalled several years ago, a patient asked if various groups – including medical providers, policymakers and people living with HIV – were working together to fight HIV/AIDS.

“We were all so busy doing our thing we hadn't put the effort to working together with common vision.”

In response, Havlir, Sheehy and others collaborated to form Getting to Zero San Francisco, a citywide effort to achieve zero new HIV infections, zero HIV deaths and zero HIV stigma in San Francisco by 2020. Its success is driven by three ideas: expanded use of PrEP (Pre-Exposure Prophylaxis) medicines to protect against infection; initiation of treatment immediately after diagnosis; and a focus on care retention.

“We’re all working together,” said Havlir. “That’s what Getting to Zero is all about.”

Volberding, director of the UCSF AIDS Research Institute, worked at ground zero of the AIDS epidemic at Zuckerberg San Francisco General Hospital. He has treated HIV patients since his first day as chief of Oncology at ZSFG in 1981.

“We didn’t really know how to more effectively take care of the many needs of our patients,” said Volberding.

He echoed the prevailing message that collaboration is needed to continue to fight HIV.

“A big part of the San Francisco response has been a partnership between physicians, the rest of health care system, and an amazing array of community organizations,” he said.

The number of people living with HIV on ART is growing, yet globally 20 million (of 37 million infected) still live without treatment.

“I think one of the things that people might lose track of is that there still is AIDS,” said Volberding. “And people still need our help.”

“We need something that’s scalable, something that can be delivered inexpensively and quickly, especially for parts of the world that don’t have resources,” said Volberding.