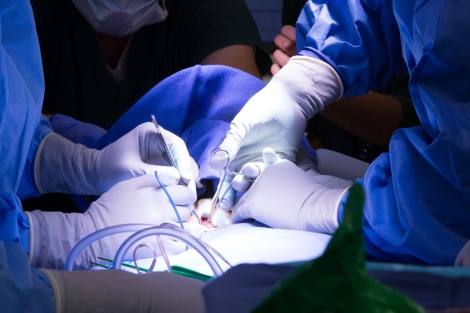 By piercing liver cells with rapid pulses of electricity, scientists at UC San Francisco have demonstrated an entirely new way to transplant cells into organs to treat disease.

Because the technique provides a hospitable environment for newly introduced cells, it may dramatically boost survival of stem cells transplanted to restore a failing liver, heart or lungs, and may one day ease the critical shortage of donor organs, the researchers said. Findings from a mouse study appear in the journal BioTechniques, published May 15.

Success of stem cell treatments largely depends on how well the new cells survive and proliferate in the target region. But the authors said that establishing a thriving population of new cells in host organs remains difficult.

“Our research is in its early stage,” said Tammy T. Chang, MD, PhD, assistant professor in the UCSF Department of Surgery and the paper’s lead author. “We’ve shown we can create the hospitable environment for new cells. Full demonstration of the procedure’s value will be when we can introduce stem cells to restore function to diseased livers and other organs.”

A major barrier to efficient cell transplantation has been the failure to provide space for new cells to take hold inside a diseased host organ such as a liver, Chang said noting that non-functional cells block newly transplanted cells from becoming established. Chang has led the effort to develop and test the new procedure that first clears away host cells to make room for transplanted cells.

The new surgical approach uses a technique called irreversible electroporation, or IRE, to kill a section of liver cells with microsecond electric pulses, creating a pocket for transplanting new cells into the organ with little collateral damage.

Chang directed IRE at selected sites on the liver of anesthetized mice to prepare for transplanting cells into the organs. The electric pulses sculpted out the needed pocket without harming vital structures between cells called the extracellular matrix, which provides support critical for the new cells to survive. The IRE procedure triggers only minimal inflammation and scarring in treated tissues, a major reason why new cells can become established.

“Inflammation normally produces scar tissue as part of the healing process, and this environment is hostile to new cells,” Chang said. “We found that at certain settings, IRE can kill organ cells without inducing inflammation, leaving behind an environment – a niche – friendly for new cells to set up shop. We believe that establishing this niche is essential for new cells to engraft efficiently.”

After using IRE to create the hospitable niche in the mouse livers, Chang transplanted clusters of liver cells, or hepatocytes, into the space. The hepatocytes established healthy colonies, still present two weeks later.

Fully developed, the technique could be used as a minimally invasive stem cell transplantation procedure to regenerate organs compromised by defects in specific types of cells, such as in end-stage liver, kidney, heart and lung diseases.

IRE has been used for ablating tumors, but at a relatively high voltage and number of pulses. For transplanting cells, Chang used significantly lower settings, which sculpted out the required space for the cells, but preserved the structures between them that they need to survive.

The IRE strategy was invented in 2005 by Boris Rubinsky, PhD, of UC Berkeley, a co-author of the study. It has been commercialized as the Nanoknife, and used to treat thousands of cancer patients for otherwise unresectable tumors. But its potential for transplantation takes it in a very promising new direction, Rubinsky said.

“Tammy has pioneered an entirely new surgical procedure using IRE,” Rubinsky said. “It may have a bigger impact in stem cell transplantation than its use for treatment of cancer.”

Much remains a mystery in the field of regenerative medicine, Chang said, and her work is no exception. How the IRE technique even works to clear host cells, for example, is unclear.

“We don’t know how IRE kills the cells that it penetrates, and we don’t know how the immune system clears the dead cells. Understanding both could be crucial to improving the transplantation success rate.”

Some evidence indicates that the cells die from apoptosis – the normal process of programmed cell death. But other evidence suggests that certain electrical settings can lead to a type of cell death that triggers inflammation and damages the extracellular matrix, which is the very problem the procedure aims to overcome.

“We need to be at the apoptosis end of the spectrum,” Chang said. “We want to establish the best combination of electrical parameters to drive the response toward apoptosis. We’re trying to pioneer regenerative surgery. I think this is one potential approach.”

The study was supported by funding from the National Institutes of Health.

Vivian X. Zhou of UCSF is a co-author of the study.

Additional information regarding Chang’s research can be found at http://livertissueengineering.ucsf.edu/.