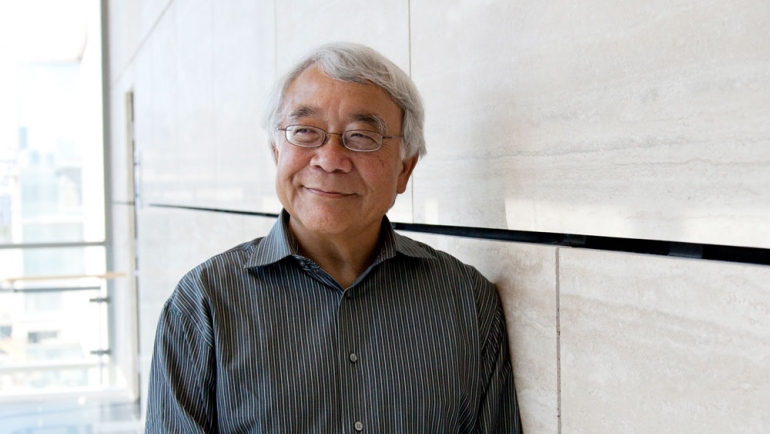 Keith Yamamoto, PhD, has spent his career doing basic research, and also working both to improve the practice of science and to amplify its impact beyond the walls of academia.

As a Princeton graduate student in the early 1970s, he helped his mentor, Bruce Alberts, PhD, start a program to introduce the excitement of biological research to Trenton high school students. In that politically volatile time, he also participated in Vietnam War protests, and took a leave of absence to work full time in the McGovern presidential campaign.

“Those experiences introduced me to the challenges of working with people who see the world very differently than us scientists, and the idea that there are things that scientists could do to make our endeavor better – for ourselves and for others,” he recalled.

When he joined the UC San Francisco faculty in 1976, Yamamoto continued pursuing those values – as chair of Cellular and Molecular Pharmacology, then vice dean in the School of Medicine, and vice chancellor for Research.

Now, in his new role as UCSF’s first vice chancellor for Science Policy and Strategy, he’ll lead efforts to anticipate the needs of an increasingly dynamic biomedical research endeavor, and to position UCSF optimally, both by working within the University and by influencing and shaping science policy at the state and national levels and beyond.

As the top public recipient of National Institutes of Health (NIH) funding, UCSF has been recognized as one of the country’s leading research institutions. “UCSF investigators, trainees and staff are amazing," says Yamamoto, “so one might say that the best thing I could do is simply to stay out of their way!”

He has been a leading voice for science policy that emphasizes integration at three levels: 1) basic, clinical and social/behavioral/population research; 2) a merging of the concepts and approaches of physical sciences, engineering and computation/math with those of the life sciences; and 3) effective partnerships between academia, industry and government.

Keith Yamamoto testifies during a U.S. Senate hearing of the Subcommittee on Space, Science, and Competitiveness titled "Unlocking the Cures for Americas Most Deadly Diseases," in July 2015. Also appearing from left, are former Sen. Tom Coburn, Christopher Frangione of XPRIZE, and Peter Huber of the Manhattan Institute. Photo by Tom Williams/Getty

Yamamoto believes that the outcomes of such integration are great scientific advances with potential to address urgent societal challenges. Notable examples in this realm are his efforts to help create and then implement two influential NAS reports, A New Biology for the 21st Century and Toward Precision Medicine.

As vice chancellor for Science Policy and Strategy, Yamamoto will extend his work with policymakers to tackle a range of issues, trends and concerns, and to create opportunities. In parallel, he will help shape UCSF’s science strategy so scientists can take strong advantage of these opportunities.

“Keith has provided guidance and vision for UCSF’s biomedical research enterprise, and has had a significant impact on science research policy at UCSF and nationally. He brings great experience to this new position and UCSF’s future,” said Chancellor Sam Hawgood, MBBS, to whom the new position will report.

Yamamoto will work closely with UCSF’s Government Relations team, which advocates for the University at the local, state and national levels. His new role will emphasize in particular science policy in Sacramento and Washington D.C.

“Keith has been a strong presence for UCSF in Washington, particularly in precision medicine, and this new position creates opportunities for us to collaborate on UCSF’s future in science and society,” said Barbara J. French, vice chancellor for Strategic Communication and University Relations.

Improving How We Do Science

Throughout his career, Yamamoto has been focused on the practice of science, science education and mentoring, peer review, communication of science, and advocacy for federal support for research. He also directed (and continues to direct) a basic research lab, focused on signaling and transcriptional regulation by nuclear receptors, with such distinction that by 1989, he was elected to the NAS.

Keith has provided guidance and vision for UCSF’s biomedical research enterprise, and has had a significant impact on science research policy at UCSF and nationally.
UCSF Chancellor Sam Hawgood

He’s been influential in promoting bold research, especially in support of new investigators. He co-chaired an NIH task force that contributed substantive improvements in the peer review system, and he played key roles with the NIH K99/R00 postdoc-faculty transition award, as well as the Pioneer, Transformative and New Innovator Awards.

At UCSF, he has served for more than 17 years as director of the Program for Breakthrough Biomedical Research, and he launched the Tri-Institutional Partnership (TriIP) program with UC Berkeley and the Lawrence Berkeley National Lab.

Yamamoto also is passionate about scientific training and the biomedical research workforce. For years, he has promoted a shorter graduate and postdoctoral training period, to move trainees more rapidly into independent investigator positions, and to effectively familiarize students with the broad spectrum of careers in addition to tenure-track faculty positions. He chairs the external advisory committee for the four-year graduate program at the Cold Spring Harbor Laboratory, and serves as a member of the NIH Director’s Working Group on the Biomedical Workforce. In that role, he promoted a funding competition for institutions that sought to devise programs that facilitate career decision-making, and now serves as a co-principal investigator on UCSF’s Motivating Informed Decisions program, which won one of the first awards. 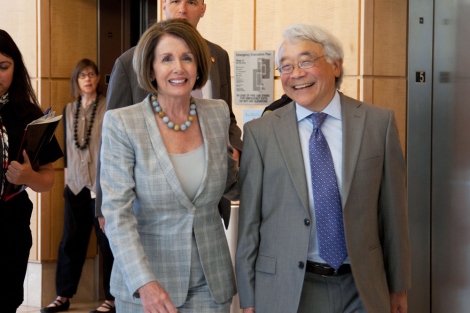 Keith Yamamoto with House Minority Leader Nancy Pelosi during one of her visits to UCSF. Photo by Cindy Chew

Executive Vice Chancellor and Provost Dan Lowenstein, MD, said he will immediately launch an internal search for a new vice chancellor for research. Yamamoto has agreed to continue in that position until a new appointee is named, and will retain his role as vice dean for research in the School of Medicine.

“Keith has done a tremendous job advancing the research enterprise at UCSF, and I am extremely grateful to him for his work over the past five years in this position,” Lowenstein said.

For his part, Yamamoto is excited about the possibilities of his new role. His decades-long efforts to effect lasting change have influenced federal and national research policy in many ways. But for Yamamoto, having an impact closer to home is crucial.

“It’s not enough just to go to Washington and make pronouncements about what should be done,” he said. “Fortunately, UCSF is a spectacular environment for pilot experiments, where the best people in the business can road-test ideas and make them better for everyone.”