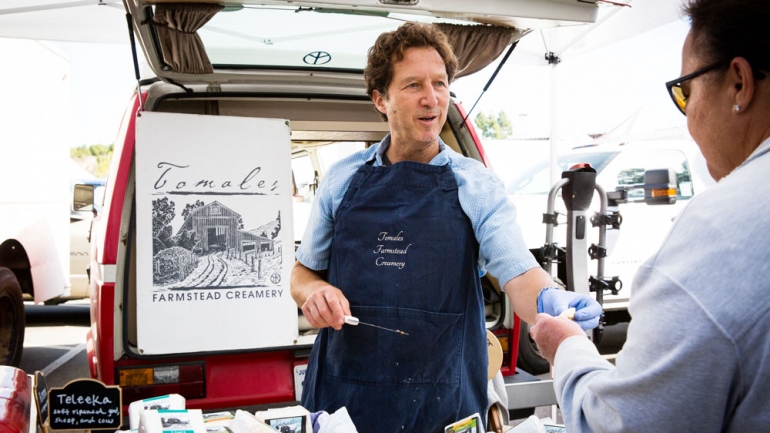 At first glance, David Jablons isn’t your typical dairy farmer. He grew up on the east side of Manhattan, has studied the molecular genetics of lung cancer for more than three decades, and on most days, treats cancer patients as chief of thoracic surgery at UCSF Medical Center.

But perched on a laboratory chair in his scrubs, Jablons, MD, describes a different side of his life – one that began in 2002 when his wife, Tamara Hicks, PsyD, a practicing clinical psychologist, stumbled across a realtor’s listing for a farm that had come upon hard times. 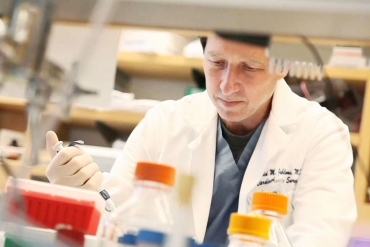 Neither Hicks nor Jablons had much agricultural experience, but both were drawn to west Marin’s vistas of fog and ocean. When they bought the 168-acre property – once a pristine Jersey cow dairy – it was an expanse of falling-down buildings, leaky roofs and long-neglected pastures. Restoring the farm to functionality took years of effort, but the couple drew from their experiences as researchers to troubleshoot the obstacles and build a business that complements their work in health care.

“The two are mutually integrated for me,” says Jablons. “Just when I can’t stand another experimental failure, I can go to the farm. And when things are rough at the farm, I can turn to a scientific success to keep going.”

Learning How to Build a Business

Jablons and Hicks spent the first five years restoring the property and certifying it organic.

Thanks to their experience applying for federal science grants, the couple applied to state and regional agencies, including the Natural Resources Conservation Service and the Marin Agricultural Land Trust, to muster the funds they needed for repairs. They built a food shed, clambered up ladders to replace roofing tiles, and restored and planted pastures. Picking a herd was easy: they both loved goats, for their size and their personality.

David Jablons and his wife, Tamara Hicks (second from right), purchased Toluma Farms in 2002 and built it into an award-winning cheese business. Photo courtesy of David Jablons

They started Toluma Farms with rescue goats, and quickly ran into issues with low yields, sickness and the animals’ poor genetics. “We knew nothing in the beginning,” Jablons recalled. “We went through every disease, veterinary crisis and problem you can think of.”

As they learned, the farm returned to life and productivity. But turning a profit was still a challenge.

For eight years, they tried selling milk to other farms that produced kefir and yogurt – but with their small herd of only 200 goats, selling milk was unsustainable, Jablons said. “We needed a value-added product. With our love of cheese and the realization that we had to do something different if we wanted to succeed, it felt like the right time to try it.”

This time, the couple applied for a U.S. Department of Agriculture grant for value-added products, which helped fund research and pay salaries to start a small creamery. They took cheese-making courses in Marin and Vermont, and eventually hired a cheese maker. Now, the farm produces at least five kinds of cheese as Tomales Farmstead Creamery, ranging from a three-day fresh variety to Atika, an award-winning aged cheese made from a blend of sheep and goats milk.

California offers them much room to experiment: As Hicks told SFGate in an interview as one of the finalists for its 2015 Good Food Awards, they can play with the flavors of mixed-milk cheeses and have customers who understand the value of what they purchase.

“You wouldn’t do that in France. It’s just unthinkable,” said Hicks. “Here, you can be playful and do something no one has really done before.”

Two years since launching their cheese-making operation, Toluma Farms has grown into a thriving business that’s nurtured from the ground up – from the pasture grass to the animals and their creamery, each step of the cheese making is carefully controlled. 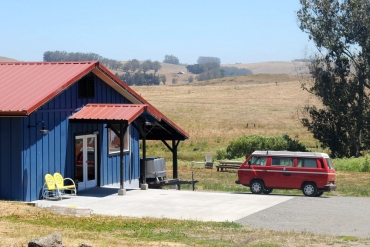 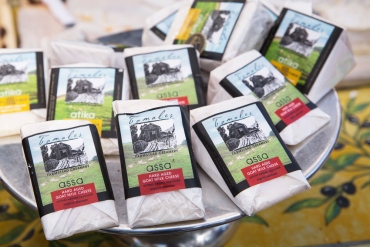 “We’re living the dream,” Jablons says. “We’ve regenerated what was once a pristine dairy and with the help of so many resources, put it back in the food system with the cheese we make.”

Through it all, Hicks and Jablons have continued to work fulltime as medical professionals. On the weekends, Jablons hits the farmers markets, selling cheeses at the Ferry Building or the San Rafael markets. “I can check a patient’s incision and sell them cheese at the same time,” he jokes.

“When we began, we wanted to figure out a way to make this farm – not necessarily profitable, just sustainable,” he says. “It still to this day is yet to be that, but we’re slowly inching our way to a more sustainable future.”