Magic tricks work because they take advantage of the brain’s sensory assumptions, tricking audiences into seeing phantoms or overlooking sleights of hand. Now a team of UC San Francisco researchers has discovered that even brainless single-celled yeast have sensory biases that can be hacked by a carefully engineered illusion, a finding that could be used to develop new approaches to fighting diseases such as cancer.

“The ability to perceive and respond to the environment is a basic attribute of all living organisms, from the greatest to the smallest,” said Wendell Lim, PhD, the study’s senior author. “And so is the susceptibility to misperception. It doesn’t matter if the illusion is based on molecular sensors within a single cell or neurons in the brain.”

In the new study, published online Nov. 19 in Science Express, Lim and his team discovered that yeast cells falsely perceive a specifically timed pattern of stress – caused by alternating between low and mildly increased sodium levels – as a massive, continuously increasing ramp of stress. In response, the microbes end up over-responding and killing themselves. The results, Lim says, suggest a whole new way of looking at the perceptual abilities of simple cells and could even be used to develop new approaches to fighting diseases using the power of illusion.

Yeast cells’ normal protective response to a mild stressor gets massively amplified by an unnatural oscillating pattern of stress, causing the yeast colony to self-destruct.

“This discovery was a bit of an accident actually,” said Lim, chair of the Department of Cellular and Molecular Pharmacology at UCSF, director of the UCSF Center for Systems and Synthetic Biology, and a Howard Hughes Medical Institute (HHMI) investigator. “We were interested in the general issue of how cells interpret information over time. Frequency is a key aspect of all our communications, whether it’s hearing language or transmitting radio signals, but do cells themselves use this kind of information? It’s something we don’t know much about.”

To explore this question, two postdoctoral fellows in Lim’s lab, Ping Wei, PhD, now at Peking University School of Life Sciences, and Amir Mitchell, PhD, set up a system that allowed them to expose yeast to a mild stressor – a small increase in salt in the yeast’s environment – and to oscillate between the increased salt level and the baseline level at different frequencies.

Normally, sensor molecules in a yeast cell detect changes in salt concentration and instruct the cell to respond by producing a protective chemical. After this transient response, the cell can resume growing happily as if conditions had not changed. The researchers found that the cells were perfectly capable of adapting when they flipped the salt stress on and off every minute or every 32 minutes. But to their surprise, when they tried an eight-minute oscillation of precisely the same salt level the cells quickly stopped growing and began to die off.

“That was just a jaw-dropping moment,” said Mitchell. “These cells should be able to handle this level of osmotic stress, but at one particular frequency they just go haywire. We’d never seen anything like this before.”

Could Sensory Illusions Be Used to Fight Cancer?

Mitchell, who was first author on the new study, went on to inspect the cellular mechanism underlying this unexpected, frequency-dependent toxicity. Using mathematical modeling and experiments in which he tweaked the molecular wiring of the mitogen activated protein kinase (MAPK) pathway that mediates the cells’ salt-sensing system, he revealed a sensory misperception: Because of the way the MAPK pathway is set up, the cells interpret an eight-minute oscillation as an ever-increasing staircase of salt concentration. This leads to excessive activation of the cells’ protective response, and ultimately to their death. 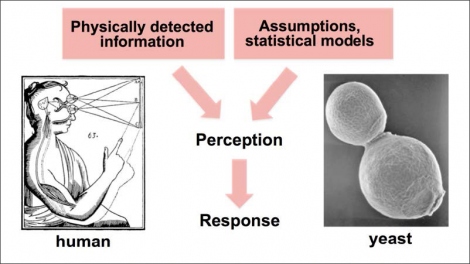 Information that lies outside our internal models may lead to sensory misperceptions, for humans and yeast alike.

“Why would these cells have evolved this bizarre sensitivity to salt oscillations?” Mitchell asked. “Well, we don’t think that they did. It’s just a side effect of the fact that the molecular signaling network yeast cells use to mediate this stress response was optimized for their natural environment, in which salt stress normally occurs in a gradually increasing ramp – like if the yeast is sitting on a grape as morning dew slowly evaporates. It’s this assumption on the part of the yeast – their anticipation that the stress will keep getting more severe – that creates their Achilles heel.”

The study suggests that many cell types, including human cells, may be predisposed to misperceptions and could be fooled by carefully engineered illusions. For instance, Mitchell said, the signaling pathway by which human cancer cells respond to chemical growth factors is closely related to the stress-sensing MAPK pathway in yeast. Thus, identification of cell-specific misperceptions might ultimately be exploited to induce cancer cells to kill themselves, he suggested, while minimally harming healthy, neighboring cells.

“On its own, this is a humble finding,” Lim said, but he believes it has broader implications for biomedical research. “Like us, cells have biased perceptions based on what environmental patterns they’ve evolved with. By understanding these biases, we can modulate their behavior,” he said. “In particular, it’s striking to realize how important the time domain is for cells. The temporal pattern with which we present any stimulus, whether it’s salt concentrations, drugs or beams of light, may make all the difference.”