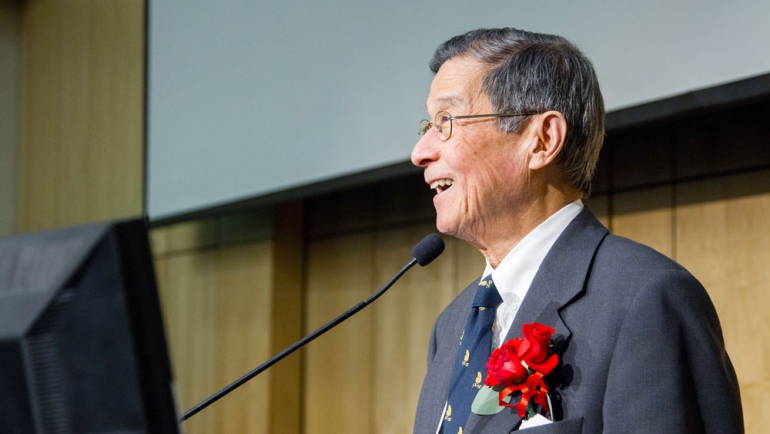 Y.W. Kan makes some remarks during the UCSF Institute for Human Genetics annual symposium, which was held this year in honor of his distinguished career. Photo by Susan Merrell

A single letter change in a gene’s DNA can spell many health outcomes. Such changes – the basis for much of modern medicine – help us know cancer risks, identify fetal disease or study health.

The idea that DNA mutations cause disease is common knowledge today – largely thanks to one study published in 1978 by Y.W. Kan, MBBS, DSc, professor of hematology at UC San Francisco. At UCSF’s Institute for Human Genetics annual symposium this week, UCSF and researchers around the country gathered to honor Kan’s contributions. 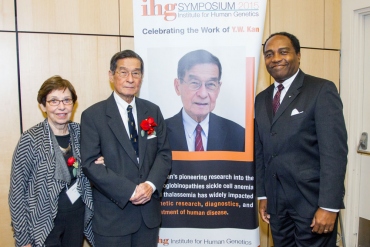 Y.W. Kan poses for a photo after the symposium with his wife, Alvera, and Griffin Rodgers, director of the National Institute of Diabetes and Digestive and Kidney Diseases​​​. Photo by Susan Merrell

Addressing the audience at the symposium, Griffin Rodgers, director of the National Institute of Diabetes and Digestive and Kidney Diseases​​​​, said: “As a hematologist, I can attest to Kan’s truly impressive career in science. And as the director of NIDDK, I take great measure of pride in our partnership with Y.W. [Kan] over decades.”

Kan is a member of the National Academy of Sciences, and was the first Chinese scientist to become a fellow of the Royal Society. Over the course of his career, he has received many awards and honors, including the 2006 Gold Medal from The University of Hong Kong, the 2004 Shaw Prize, the Albert Lasker Clinical Medical Research Award in 1991, the American College of Physicians Award in 1988, the Waterford Award in Biomedical Sciences in 1987, the Allan Award of the American Society of Human Genetics in 1984, and several others.

Born in Hong Kong, Kan earned a combined undergraduate and medical degree, as well as his PhD from the University of Hong Kong. He came to Boston in 1960, first as a fellow in hematology at Peter Bent Brigham Hospital, and then as a research associate at MIT. During his second fellowship at McGill University in Montreal, his first encounter with a thalassemia patient led to a lasting research interest. In 1972, he came to UCSF to become chief of Hematology at San Francisco General Hospital and associate professor of medicine and laboratory medicine at UCSF.

In his landmark 1978 study, Kan found that DNA-digesting enzymes cut two variants of the beta-globin gene differently because of a single nucleotide change. One of these variants was frequently associated with sickle cell anemia “and may be useful for the prediction of the sickle cell gene in prenatal diagnosis,” Kan wrote in the study. He added that such variants “could be considered as a new class of genetic marker.”

To Neil J. Risch, PhD, director of the institute, the study was a simple, direct recognition that understanding DNA changes was the path to genetic analysis of disease. “By identifying the very first DNA-based polymorphism, this work opened up the entire fields of gene identification, clinical genetics and human evolution,” he said. “I believe that all studies in human genetics today, can actually trace their roots to this paper written 37 years ago. It’s a remarkable legacy.”