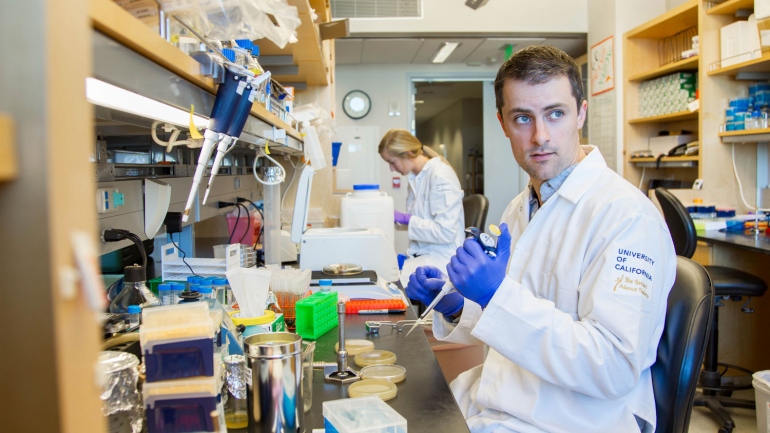 The promise of CRISPR-Cas9 as a gene-editing tool – from curing disease to enhancing embryos – has led to a flurry of research and ethical questions. But this system originally evolved to serve a much clearer goal: Like its other CRISPR-Cas counterparts, it helps bacteria become immune to infections.

Bacteria with a robust CRISPR system usually resist attacks by viruses known as bacteriophages, or simply phages. So when a plateful of these "immune" microbes grew suddenly vulnerable to viral invasions, they caught then-graduate student Joseph Bondy-Denomy’s attention.

Join Joseph Bondy-Denomy for a Reddit "Ask Me Anything" chat to learn more about his work and the potential for anti-CRISPR protein research.

Peering into the genomes of both the bacteria and their pathogens, he discovered the first evidence of anti-CRISPR proteins, which help phages slip past bacterial defenses. Bondy-Denomy, PhD, joined UC San Francisco as a Sandler Fellow in early 2015 and received an NIH Early Independence award this month to research bacterial immunity. His lab continues to study CRISPR-Cas systems – not merely as molecular tools, but as part of an ancient microbial arsenal.

“What our lab is very interested in is the true biology of CRISPR-Cas systems in their ‘native habitat,'” he says. “Their evolution is a fascinating story of how bacteria have developed this sophisticated machinery to cut any piece of DNA they choose.”

Many Systems, Many Roles

Although CRISPR-Cas9 is in the limelight now, it’s not the most popular player on the microbial battlefield, according to Bondy-Denomy. Scientists have discovered at least three different CRISPR-Cas systems so far; the other two types are far more common in bacteria.

They all work in essentially the same way: After an infection, bacteria hoard scraps of phage DNA in their own genomes, separated by short palindromic repeats of their own DNA. These chunks, known as CRISPRs (clustered regularly interspaced short palindromic repeats), work with CRISPR-associated (or Cas) proteins. During a second invasion, the CRISPRs create guide RNA molecules that help proteins such as Cas9 home in on and slice up anything that resembles the previously stored scraps. While the CRISPR/Cas9 system only needs the single Cas9 protein, others rely on several Cas proteins working together.

Out in the microbial wilderness, such immunity is crucial to bacterial survival. But several CRISPRs are still like mystery weapons; many bacteria have CRISPRs with unknown targets, and others stash CRISPRs in their genome even when they’re in environments where phage can’t find them, such as inside other cells. What’s the purpose of such genetic baggage?

“There are a few options – one is that phages can attack the bacteria when it’s not inside another cell, and the bacteria uses CRISPR to simply protect itself,” he says. “Another possibility is that these systems exist to target other mobile DNA, or to control regulation of their own genes.”

These are some of the questions Bondy-Denomy’s UCSF lab hopes to answer. For now, they’ve begun with trying to tease apart how the pathogenic bacterium Pseudomonas aeruginosa turns its CRISPR system on and off. 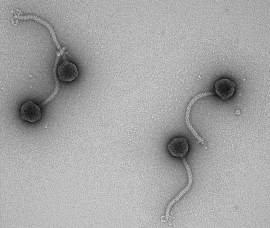 Electron micrograph of a Pseudomonas phage. Image courtesy of Bondy-Denomy

Working with Pseudomonas aeruginosa as a graduate student is how Bondy-Denomy stumbled on anti-CRISPR proteins.

“I didn’t know it at the time, but I was working with a bacterial strain that had a CRISPR system, so I was unconsciously selecting phages that were likely to have anti-CRISPRs,” he recalls.

Beyond the tussle between phage and microbe, these CRISPR and anti-CRISPR systems could help in the fight against human infectious diseases.

With antibiotic resistance a growing concern, researchers and companies are turning to phages as novel antimicrobials. Knowing how a pathogenic bacteria’s CRISPR-Cas system responds to potential anti-CRISPR proteins in phages could prove key to the success of such tactics, according to Bondy-Denomy.

“If you were designing the perfect phage to treat an infection, you’d include anti-CRISPRs in the mix so pathogens can’t evade attack,” he added.

In a recent paper, Bondy-Denomy and colleagues at the University of Toronto found that although many anti-CRISPR proteins turned CRISPR off, they worked in surprisingly diverse ways. Some modulated the system to slow it down, while others blocked CRISPR binding to its target. Another anti-CRISPR allowed CRISPR to bind to its target DNA but not chop it up.

These diverse anti-CRISPRs could add to molecular toolkits, allowing researchers a fine-tuned control over CRISPR-based gene editing. One key to such advances, says Bondy-Denomy, is learning how CRISPRS work in their "natural habitat."

“CRISPR is such a recent discovery that we’re still understanding much of its basic biology,” he says. “Branching into new microbes with unstudied CRISPR systems, like Pseudomonas or intracellular bacteria, for example, allows us to learn something new and opens up many new doors for investigation.”