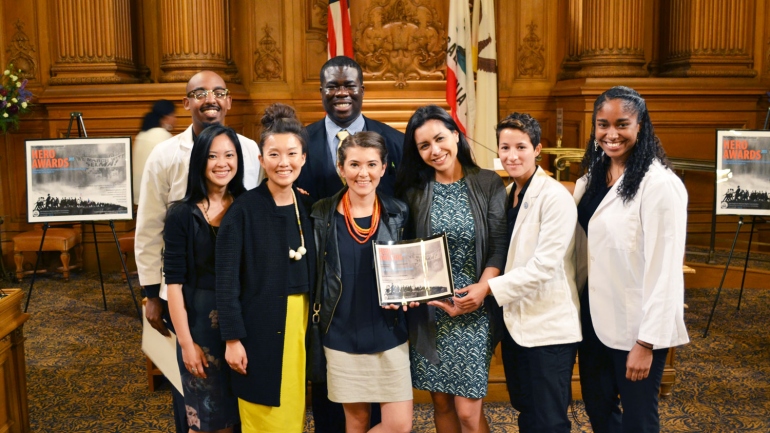 UC San Francisco medical students sparked a national movement when they staged a “die-in” last year to call attention to racial disparities in health care. The efforts of the UCSF White Coats for Black Lives movement were recognized this week when they received a “Hero Award" from the San Francisco Human Rights Commission for the organization’s efforts to advance civil rights.

In a public ceremony at City Hall on Thursday, UCSF second-year medical students Kafi Hemphill, Tomas Tesfasilassie and Andrea Quinones Rivera accepted the award on behalf of the group. 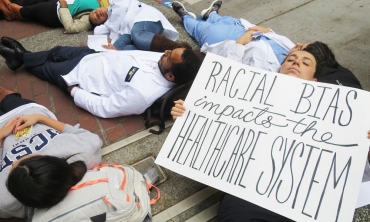 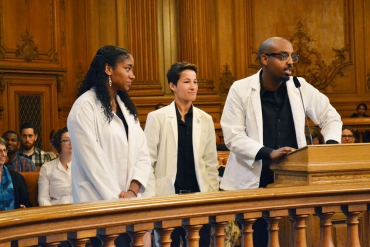 The group’s ongoing work in “inspiring their peers and health institutions to look at social injustice as a health issue and to provide guidance on how these institutions can better contribute to the health of underserved communities” was lauded by the commission. The group also received certificates of special recognition by the California Senate, signed by Mark Leno, and Congress, signed by Nancy Pelosi.

The #whitecoats4blacklives movement began in December 2014, following the grand jury decisions in the cases of Michael Brown and Eric Garner. Students of color and their allies in the UCSF School of Medicine, supported by the UCSF Under-represented in Medicine (UIM) program, felt the need to address racism and violence as public health issues. Raising awareness via social media, they did so by staging a national “die-in” demonstration, with more than 80 medical schools and 2,000 participants.

“Receiving this recognition in the form of the award, in a way, tells us how much our work resonated with the community,” said fourth-year medical student Nicolas Barcelo, one of the student leaders of the movement.

In ongoing efforts at UCSF, students who were part of the initial demonstration are actively working with UCSF leadership to create programs and interventions to achieve racial justice and equality. One of these initiatives, for example, aims to increase awareness amongst providers about implicit biases toward patients of different identities, which can have a profound impact on their care.

“The movement has motivated health serving institutions to concrete action, and has demonstrated to students the power they have in organizing to advocate for patents and their communities,” Barcelo said. “I cannot wait to see what successes these students will continue to achieve.”