In a surprising finding, a team of UC San Francisco and Stanford University scientists has discovered that a protein thought to be crucial for the body to develop and function correctly can be reduced by half in mice with no apparent ill effects. More strikingly, the group found that the full complement of the protein normally found in cells can be hijacked by cancer cells to fuel their growth.

The work raises the possibility that targeted cancer drugs that lower levels of the protein could suppress tumor growth without affecting healthy cells. The findings are reported in the June 18 online issue of Cell.

“We thought this factor would be impossible to target based on our previous understanding, but that understanding seems to have been incorrect,” said co-first author Morgan L. Truitt, a UCSF graduate student in the Biomedical Sciences Program. “This represents a new and exciting finding in regard to how we might target the development of tumors.” 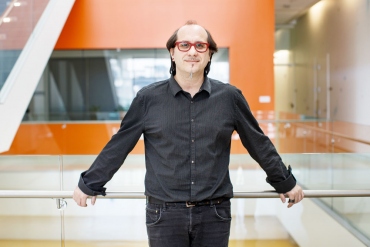 The protein, known as eIF4E, is a master regulator of a fundamental cellular process called translation and has widely been considered to be “untouchable” in experiments, said UCSF’s Davide Ruggero, PhD, who holds the Helen Diller Family Chair in Basic Cancer Research, and Maria Barna, PhD, assistant professor of developmental biology and genetics at Stanford, co-senior authors of the new study.

“The dogma in every textbook was that if you tweaked eIF4E in any way it would have profound and dramatic effects on cells and development of the embryo,” Barna said.

But when the research team engineered mice that carried only a single copy of the eIF4E gene, thereby reducing the “dosage” of the eIF4E protein in every cell by half, the mice developed normally into adulthood. In anatomical and physiological analyses conducted over several years, the mice have been found to be indistinguishable from normal mice.

“Our first thought was that this wasn’t possible — it was mind-blowing — so we’ve been very thorough in checking and re-checking the results,” said Ruggero, a member of the UCSF Helen Diller Family Comprehensive Cancer Center (HDFCCC).

During translation, strands of messenger RNA (mRNA) carry protein-making instructions from genes to ribosomes, the cellular machines in which proteins are made. In organisms ranging from yeast to mammals, eIF4E forms a key part of a complex that binds to a cap at the end of each mRNA strand and guides the strands to ribosomes. eIF4E is thereby thought to be essential for the production of all proteins, the final effector molecules that guide every cellular event.

Because this cap-binding function of eIF4E has been considered so essential, the researchers thought other known players in translation must somehow be working overtime in the engineered mice to take up the slack for the reduction in eIF4E. But in a series of experiments in the Ruggero laboratory led by Truitt and co-first author Crystal S. Conn, PhD, a postdoctoral fellow in the UCSF Department of Urology, they found no such compensatory mechanisms.

Once they were convinced that the 50 percent reduction in eIF4E had no apparent consequences for the engineered mice, the group next considered why mammalian organisms had evolved with so much “extra” cap-binding capacity, especially since previous research has shown that eIF4E is present at abnormally high levels in tumor cells.

“Cancer cells rely on increases in protein synthesis as a critical means for sustaining their growth and survival, for rapidly dividing and proliferating — a very big distinction from normal cells,” Barna said.

In lab-dish experiments, mutations in certain genes known as oncogenes, such as Ras and Myc, reliably “transform” normal mouse cells into cancer-like cells — the cells overproliferate, just as tumor cells do. But when the researchers introduced oncogenic Myc and Ras into cells in which eIF4E had been halved, “again it was a big surprise: these cells appeared to be untransformable,” Ruggero said.

When the scientists used a tool called short-hairpin RNAs to sharply reduce eIF4E levels in human lung cancer cells carrying a Ras mutation, they again observed that the potential of these cells to develop tumors was significantly weakened.

The researchers found, however, that restoring eIF4E to normal levels allowed the cells to transform and overproliferate, suggesting that the surplus of eIF4E generally carried by cells is somehow exploited by mutated oncogenes when they set the stage for the development of cancer.

These results were consistent with those seen in eIF4E-deficient mice carrying Ras mutations, which had a sharply reduced propensity to develop lung cancer compared to mice with a full complement of eIF4E.

Since eIF4E regulates translation, the researchers explored the mechanisms underlying these results by comparing which genes are more or less likely to be translated into proteins when normal and eIF4E-depleted cells are oncogenically transformed. Out of a total of 722 genes affected by oncogenic transformation, 133 were found to be sensitive to eIF4E levels.

Interestingly, the majority of mRNAs produced by these genes contain a molecular signature near the cap that the researchers dubbed a “CERT motif.” The group believes that in cancer cells eIF4E is selectively recruited to certain mRNA caps by the presence of the CERT motif, which enhances the translation of certain families of genes.

The team took particular note of a subset of eIF4E-sensitive genes that are involved in the response to reactive oxygen species (ROS), potentially toxic molecules that accumulate when cells are under stress, such as that caused by oncogenic transformation. Though cells require some ROS to survive, stress conditions can push ROS levels beyond a threshold, triggering a program that causes cells to commit suicide. To maintain the correct balance, mildly stressed cells activate genes to create scavenger proteins that mop up excess ROS.

The UCSF-Stanford team found that when eIF4E is at normal levels, cancer cells can enhance their survival by specifically increasing the translation of these ROS scavenger genes via eIF4E activity, allowing the cancer cells to survive.

Most cancer drug development is aimed at specifically targeting faulty proteins caused by mutations in oncogenes such as Ras and Myc, but peculiarities in the structure of some important oncogenic proteins has so far rendered them “undruggable.”

To that end, in 2013 Ruggero and UCSF colleague Kevan M. Shokat, PhD, professor of cellular and molecular pharmacology and a Howard Hughes Medical Institute Investigator, founded San Diego-based eFFECTOR Therapeutics. eFFECTOR is developing new treatments for patients with cancer and other serious diseases, in part by characterizing drug action and identifying targets related to the cell’s translational mechanisms. Some of the results in the new work reported in Cell made use of techniques that UCSF has exclusively licensed to eFFECTOR.

Taken together, the researchers said, the results in the new study suggest that normal cells need far less eIF4E than is normally present to properly develop and function, but they make use of the surplus to initiate protective mechanisms when under stress. Cancer cells appear to hijack this mechanism, using the extra reservoir of eIF4E to ward off the stress response to enhance their own survival.

“This work pulls back the curtain on a very unique trick that cancer cells have developed during the course of evolution to promote their own growth, through a program that’s specific to cancer cells,” Barna said.

The work was supported by the National Institutes of Health; an NIH Director’s New Innovator Award, a Alfred P. Sloan Research Fellowship, a Mallinckrodt Foundation Award, and a Pew Scholars Award to Barna; an American Cancer Society grant to Conn; a Life Science Research Foundation Postdoctoral Fellowship to Shi; an Onyx Oncology Innovation Alliance Award to Ruggero. Ruggero is a Leukemia and Lymphoma Society Scholar, and a shareholder and scientific advisory board member of eFFECTOR Therapeutics, Inc.