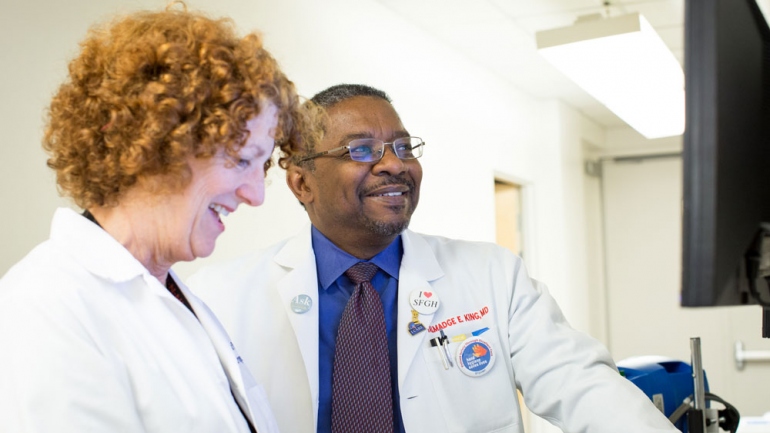 Talmadge King Jr.’s journey to leading one of the top medical schools in the U.S. began in the small, segregated coastal town of Darien, Ga., during the 1960s.

“The institutions were segregated, but we lived in an integrated community,” King recalls. “White and black kids played together until we became teenagers; then race became a big issue.”

Despite growing up during the turbulent years in the fight for Civil Rights, King credits the love and support of his parents and guidance from his school counselor, for helping him thrive in an unequal world. 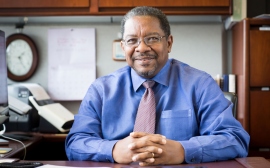 Return to the main story »

“I had the good fortune that Catherine Cooper picked me out in fifth grade,” he said. “From sixth grade on, she watched me like a hawk.”

At home, his parents instilled the values of public service and the importance of higher education in King, his two brothers and two sisters. “Going to college was never a question for us,” King said. “It was clear; there wasn’t even much discussion.”

His mother, Almetta, was a schoolteacher and his father, Talmadge King, Sr., ran his own electronics business until recruited by the community to become one of the town’s first black police officers.

“He knew everybody and could connect with them,” King said. “The community trusted him. My dad is a people-person, a kindhearted man. As a kid, I was my dad’s shadow. My mom was full of energy, always on the go, and her frequent admonition to us was to ‘be nice.’”

Most Likely to Succeed

In high school, King focused his attention to his studies and sports. He was named valedictorian, elected president of his class and student body, and voted best all-around athlete and most likely to succeed.

King proved his peers right. After high school, he headed more than 1,300 miles north to Saint Peter, Minn., where he majored in psychology and biology from Gustavus Adolphus College. 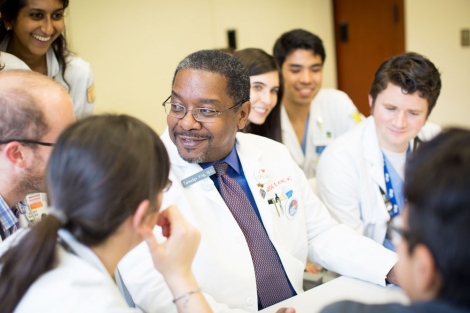 Talmadge King in a meeting with chief residents in the Department of Medicine. Photo by Elisabeth Fall

“I wanted to go far away. The college was the town. It was the right thing for me at that time. It was a wonderful place to study. I loved it.”

From there, King attended Harvard Medical School and then served his internal medicine residency at Emory University Affiliated Hospitals in Atlanta. He completed a pulmonary fellowship and joined the faculty at the University of Colorado Health Sciences Center in Denver, before he was recruited to UC San Francisco in 1997.

As the new dean of the UCSF School of Medicine, King says that he will wholeheartedly pursue the humanitarian mission of improving health that has contributed to UCSF’s success for 150 years.

“Our faculty, staff and students are outstanding,” King said. “I believe that UCSF’s whole is greater than the sum of its parts. One important part of my job as dean will be to foster ways for us to work together effectively to make the most of the immense talent here.”

A physician-scientist, King will continue to strengthen the already robust partnerships with San Francisco General Hospital and Trauma Center and the San Francisco Veterans Affairs Medical Center, valuable campuses for training and research. He will advocate for the UCSF Fresno Medical Education Program and for the basic research that is the hallmark of UCSF’s success.

“We are a research-intensive School of Medicine,” said King. “We must work aggressively to sustain and grow our research programs, despite the considerable pressures we face given the National Institutes of Health’s declining budget.”

King says one of the “biggest challenge for this campus is developing and building a viable, sustainable health network that provides high-quality care. We need to improve our access and lower our costs while sustaining our quality.”

Referring to health care as a team sport, King says faculty, staff, students and trainees all need do their part to make the clinical enterprise successful and to continue UCSF’s longstanding public service mission to help vulnerable and underserved communities. 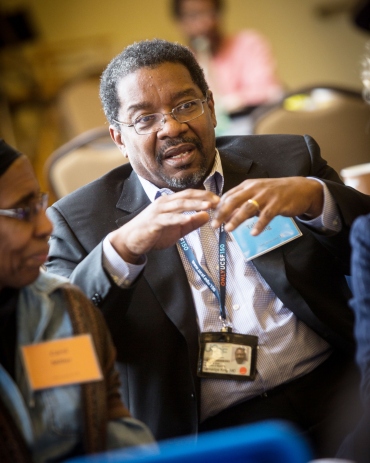 Talmadge King participates in a breakout discussion at the January 2015 UCSF School of Medicine leadership retreat that addressed issues of racial inequality and health disparities. Photo by Elisabeth Fall

King is fully aware of the significance of his role at a time when the country and campus are focused on issues of social justice and health disparities. As dean, he will continue the work sparked by UCSF students last December in the #whitecoats4blacklives movement that spread to more than 200 universities nationwide. Their action inspired UCSF leaders to address racism head-on at the School of Medicine’s 2015 leadership retreat and has reignited much-needed dialogue about the importance of diversity at forums throughout campus.

“We need to keep the momentum going,” King said. “Diversity is a huge issue. At UCSF, the leadership is now talking more candidly and comfortably about the challenges we’re facing.”

One of the goals is to build a pipeline of students who will become leaders in their fields, potentially pursuing academic medicine right here at UCSF. “We’ve done a really good job in recruiting outstanding medical and graduate students from diverse backgrounds. We have an obligation to ensure that they will be prepared to do great work. I highly value our role in education at this University.”

For his part, King co-chaired a committee focusing on how UCSF can improve upon its ongoing faculty recruitment efforts of underrepresented minorities, who currently make up 6 percent of UCSF faculty.

King also realizes that UCSF leadership must address campus climate issues that he believes are contributing to the University’s lower employee engagement survey scores when compared to similar institutions. This includes continuing to resolve issues related to Operational Excellence, addressing the dissatisfaction with space allocation and the challenges raised by the move to Mission Hall.

Making course corrections is a work in progress and will take some time, but King is ready to roll up his sleeves, involve key stakeholders, find common ground and forge consensus. He has done just that in nearly two decades at UCSF.

Asked what his wife of 47 years thinks about his promotion to dean, King smiled. “She said, ‘You used to work six days a week as vice chair, now you work seven as chair. When you’re dean, are you going to work eight?”

The couple have two grown daughters and two granddaughters. When he’s not at UCSF, King enjoys traveling overseas, watching one of his favorite sports teams (San Francisco Giants and Denver Broncos) or visiting his granddaughters in Philadelphia.

Although his schedule will be tight, King knows his work will be time well spent. “I enjoy being part of UCSF and will work to ensure that we continue to excel in the areas where we can make the greatest impact in science and health.”