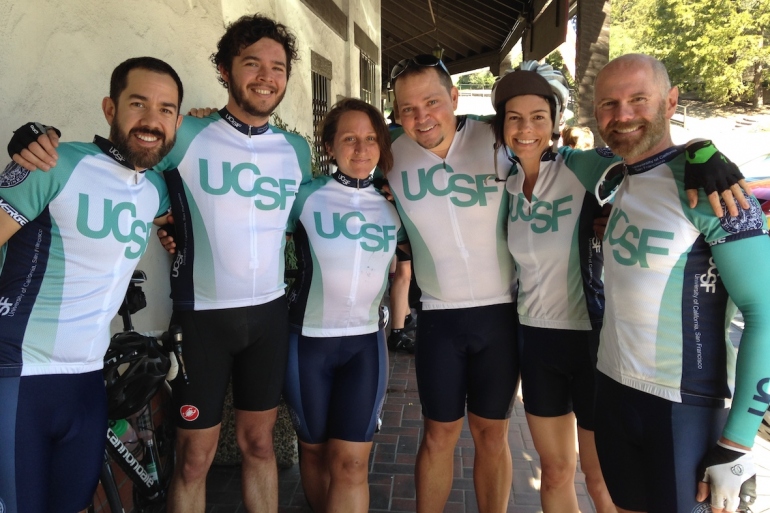 A team of UCSF cyclists will join thousands of others this June to participate and raise money for AIDS/LifeCycle—a seven-day, 545-mile bike ride from San Francisco to Los Angeles that has become the world's largest annual, single-event AIDS fundraiser. 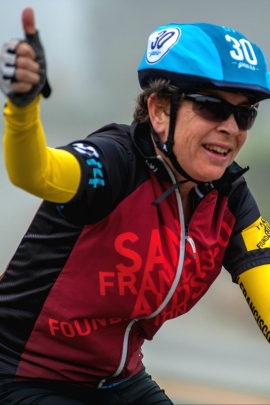 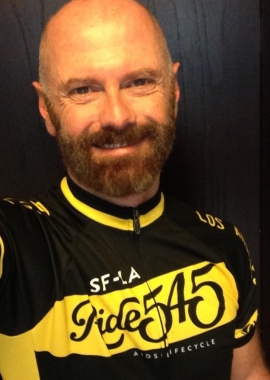 “I want to do my part to see an end to HIV/AIDS,” said Ellen Haller, MD, professor of clinical psychiatry with the Department of Psychiatry, who is participating in her third AIDS ride. “With the money we raise, the Los Angeles LGBT Center and San Francisco AIDS Foundation can continue to provide critical services for the HIV-positive community and prevent new HIV infections through programs, services, and education.”

Some of the UCSF team members are veterans who have done this ride a number of times in the past, while others are new to long-distance cycling. So far 21 UCSF faculty, staff, students and trainees have joined the UCSF team. The ride will take place May 31 - June 6 starting at the Cow Palace in San Francisco, and ending in Westwood, near the UCLA campus in Los Angeles, and 2015 will be the first year in many that an official Team UCSF has been formed.

“As a first-time participant, I wasn’t even sure at first if this was something I could physically do,” said team captain Chris Waddling, a specialist in the Department of Biochemistry and Biophysics. “Now having spent nearly a year training and logging more than 5,500 miles on my bike, I look forward to spending a week on the road with the amazing community of AIDS/LifeCycle participants.”

“Along with making us feel more like a team, the outfits have really given us a sense that UCSF stands behind what we’re doing and supports its students’ and employees’ charitable efforts,” Waddling said. “It makes us proud to show our fellow cyclists that our employer is also helping to make a difference in the lives of people living with HIV/AIDS.”

Some members of UCSF’s medical community will volunteer their time and provide essential medical support to cyclists during the course of the ride.

In the seven days it takes the 2,500 riders and 1,500 volunteer roadies to reach Los Angeles, more than 1,000 people in the United States will become infected with HIV. Especially alarming is the fact that one out of every five people living with HIV nationwide is not aware of their status, according to AIDS/LifeCycle.

“What these cyclists contribute to the fight against HIV/AIDS is truly remarkable,” said AIDS/LifeCycle Senior Director Greg Sroda. “Each year people from across the country and all over the world join us not only because the event is a life-changing experience for them, but also because the money they raise changes the lives of people living with HIV.” 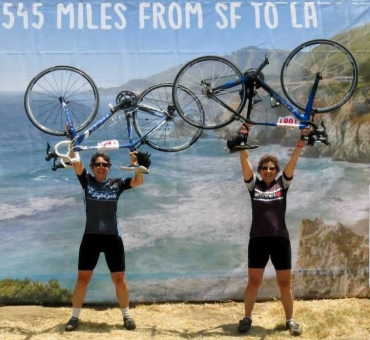 The Los Angeles LGBT Center and San Francisco AIDS Foundation, the beneficiaries and producers of AIDS/LifeCycle, are at the forefront of efforts to reduce new HIV infections and are dedicated to ensuring access to proper medical care for anyone who needs it. Both organizations deliver essential community programs and services for HIV prevention, testing, care, and education.

AIDS/LifeCycle participants play a significant role in helping to promote HIV/AIDS education and awareness through outreach to hundreds of thousands of people who support their efforts. On average, each cyclist raises close to $6,000 through their network of donors, which includes family, friends, and co-workers.

So far this year, Team UCSF has raised more than $45,000. UCSF employees who represent other teams have raised an additional $40,000. To help team members reach their collective goal of $100,000, please visit the Team UCSF page.