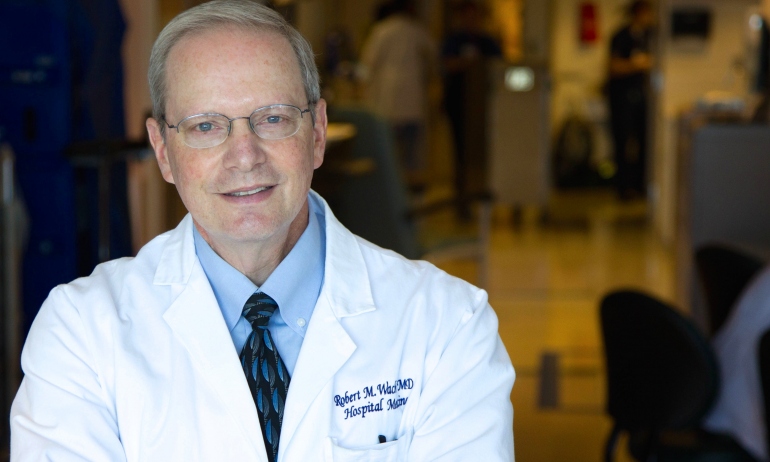 UC San Francisco’s Robert Wachter, MD, a leading national expert on patient safety who helped pioneer hospital medicine, has landed at number one on Modern Healthcare magazine’s annual list of the most influential physician executives. This is the first time he topped the list, which includes (#3) Thomas Frieden, MD, MPH, director of the Centers of Disease Control and Prevention, (#32) Francis Collins, MD, PhD, director of the National Institutes of Health, and (#44) Susan Desmond-Hellmann, MD, MPH, CEO of the Bill & Melinda Gates Foundation and chancellor emeritus of UCSF. This is Wachter's eight consecutive appearance on this list, which was published April 4.

“I was shocked, in part because there are so many unbelievable people on the list,” said Wachter, professor and associate chair of the Department of Medicine. “Being mentioned in that esteemed company, I was surprised and very flattered.”

In 1996 Wachter coined the term “hospitalist” – a physician dedicated to the delivery of comprehensive medical care to hospitalized patients – and is generally considered the “father” of the hospitalist field, the fastest growing specialty in the history of modern medicine.

He has created a popular blog called “Wachter’s World,” which focuses on hospital medicine, patient care and patient safety. He is also very active on social media, with more than 8,200 followers on Twitter, while continuing to be an influential medical expert for traditional media outlets like The New York Times. He also recently published a new book called The Digital Doctor: Hope, Hype, and Harm at the Dawn of Medicine’s Computer Age.

Wachter’s impact in the field of hospital medicine and his modern approach to health care communication caught the attention of Modern Healthcare editors, who deemed him “the most influential … in any health care sector, in terms of leadership and impact.”

“They’ve come to see the work that I do as being interesting and important,” Wachter said. “And that’s very gratifying because that’s what I try to do for a living.”

Modern Healthcare has no formal system in weighing various factors to come up with their list. Wachter acknowledges measuring “influence” among physician executives has evolved.The headline they chose – "Wachter not afraid to challenge status quo'"– is sort of how Wachter sees himself.  "I challenge the status quo but do it in a way that, hopefully, moves the system forward," he said. "My passion doesn’t come from a place of anger but from a place of love of the system. I try to make it better for our patients and the people who work in it.”

“Clearly influence for a physician leader 10 or 15 years ago was the size of the organization you ran, and your academic pedigree and how many articles you had in New England Journal and JAMA,” he said. “And these days the democratization of information has created all sorts of new avenues to reach and influence people and, as someone who likes doing that, I have tried to jump into these areas with both feet and have generally enjoyed them.

“Many people are excited about this new world, and are trying to take advantage of this new vehicle. It doesn’t obviate the need for academic productivity. I think if I only tweeted but didn’t write for major journals that would be a problem. But for a faculty member here, I take full advantage of new tools to communicate. I think the organization is justifiably supportive of those people and it’s been a wonderful environment to do that. I have never felt anything other than total support at UCSF.”

Wachter is past president of the Society of Hospital Medicine, and the immediate past chair of the American Board of Internal Medicine.