The worst Ebola outbreak in history is not yet over.

While Ebola is no longer dominating headlines and nightly newscasts, global health care workers remain in West Africa fighting the deadly virus and helping communities reeling from the devastation. More than 9,700 people have died of the disease since the epidemic emerged in December 2013, according to the World Health Organization.

For many on the frontlines, there's also a bigger opportunity: leveraging the global outcry to improve health system infrastructure and disease surveillance in countries still trying to recover from decades of civil war.

Ebola response volunteers joined leading researchers at a Feb. 26 UC San Francisco town hall meeting to discuss the current state of the outbreak – and the path forward. The UCSF community also took the time to recognize the courageous work by volunteers who worked on the ground in West Africa, as well as those who ensured we were prepared for potential cases at UCSF Medical Center.

“It’s certainly fitting that TIME Magazine named Ebola responders as the persons of the year,” said Chancellor Sam Hawgood, MBBS. “They certainly should be hailed as heroes, no question about that. So today I’d like to take a moment to recognize and show appreciation for more than 100 local and global UCSF responders to Ebola.”

Despite the containment of Ebola in some countries, volunteer responders are still needed in West Africa.

Sierra Leone and Guinea continue to face new Ebola cases and ongoing struggles with the virus, while the Ebola outbreak in Liberia appears to be contained, said George Rutherford, MD, who serves as the director of the Global Health Sciences Prevention and Public Health Group and co-chair of the Chancellor’s Ebola Task Force.

"As of Feb. 18, 23,350 cases had been reported worldwide,” said Rutherford. “Currently Sierra Leone has substantially more cases than other countries.” 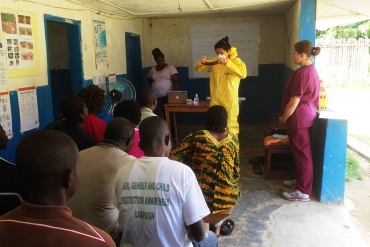 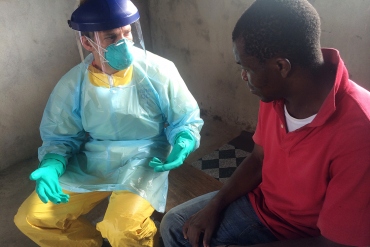 To that end, researchers and clinicians are testing and implementing a new rapid Ebola diagnostic field tool in Sierra Leone.

It’s a simple dipstick that tests a tiny prick of blood from a patient’s finger, giving results within minutes. The tool can be transported to remote clinics across the country, and requires no complex machinery other than refrigeration.

“It’s a game-changer,” said Dan Kelly, MD. ”It will change the way we approach screening and triage with patients, and not just at Ebola treatment units but through all clinics, as well as potentially at schools and other facilities.”

Initial data suggest this dipstick tool is effective in screening for Ebola.

Kelly and responders investigated the point-of-care diagnostic tool in the field and plan to release this final level of validation testing before clinical use. Then, he will begin to evaluate the clinical outcomes, looking to answer such questions as: Does the result from the rapid diagnostic predict survival? Can its clinical use improve mortality rates?

Kelly has been working with Sierra Leonean medical staff to improve health infrastructure since he co-founded the Wellbody Alliance in 2006 with Mohamed Bailor Barrie, MBChB, a Sierra Leonean doctor who is now a global health fellow at Harvard University.

Kelly, who is curently on leave to boost response efforts in Sierra Leone, is one of a dozen UCSF trainees and faculty members to respond to the outbreak in West Africa.

“Given the altruism of our faculty and staff, we have made a conscious decision to facilitate their involvement in providing care to patients in West Africa.” said Rutherford. “UCSF, in contrast to other North American academic medical centers, has been remarkably foresighted about the Ebola outbreak.”

UCSF researchers are also working on diagnostic tools that could detect not only Ebola, but other causes of acute hemorrhagic fever that up until recently were more common than Ebola. 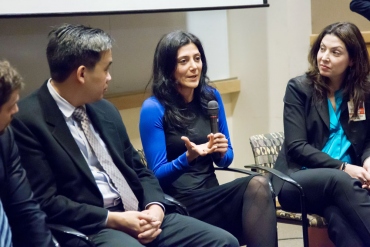 “We need tools in the field to not only diagnose Ebola, but also distinguish it from Lassa, malaria, typhoid, and dengue,” said Charles Chiu, MD, PhD, an infectious disease specialist who is working on validating the data from early prototypes of a comprehensive diagnostic test for hemorrhagic fever. Malaria is endemic in West Africa, and Lassa fever causes more than 300,000 cases in West Africa each year.

“These infections can all cause a similar clinical illness, and Ebola hemorrhagic fever actually presents more like flu in the early stages, so it’s critical to have a test that could be rapidly implemented once a person rolls into the clinic.”

Accurately identifying a person’s illness could curb the spread of an epidemic like Ebola, and help the patient more quickly get the treatment he or she needs.

Beyond individual diagnosis, a test that can simultaneously test for eight different hemorrhagic fever diseases will be an invaluable tool for local, regional and global health surveillance, said Chiu.

“Once these surveillance measures are in place, they will help prevent this outbreak from spreading, because if we can curtail it early on, we can limit the disease to very few people,” said Chiu.

Better disease surveillance is indeed a key part of building a stronger health care infrastructure – not just in West Africa, but for our global community. 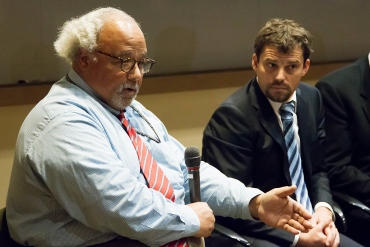 Eric Goosby (left) speaks about his work with the UN and the WHO to improve the global response to the Ebola outbreak. Photo by Susan Merrell

The flurry of international attention and the horror of the disease did serve to highlight how woefully unprepared some African countries and global health organizations are to manage an outbreak like this, said Eric Goosby, MD, the director for Global Health Delivery and Diplomacy in UCSF Global Health Sciences.

“Up until now, strengthening the health system hasn’t been a high priority because it’s not sexy, but now I think it’s at the front of the discussion, and I hope we can keep it there.”

Goosby – former global AIDS coordinator for the Obama administration who recently was appointed the United Nations Special Envoy on Tuberculosis – has been closely involved in ongoing reforms at the World Health Organization, which he said has involved unusually frank discussions of its current efforts and how they can be realistically enhanced. Local and international officials are trying to understand what happened, what didn’t happen, who was in charge and how to put disease reporting mechanisms in place. It’s all led to difficult conversations among the highest levels at WHO and the UN, he said.

“I believe [these discussions] have generated a substantive move to understand the specifics, and to use our findings as opportunity to pivot into real solutions that will be laid in place over next few years,” said Goosby.

“I don’t believe it’s there by any means yet, but I’ve never seen the movement that has occurred before,” he said. “I’m quite optimistic.”

Helping on the Homefront

Here are some ways the UCSF community rallied to help in the Ebola response, even without leaving the country. 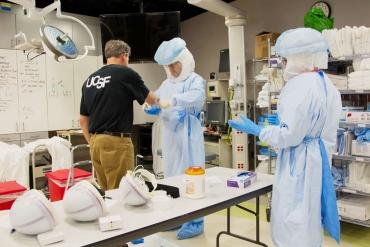 UCSF Medical Center staff underwent training to properly use personal protective equipment when treating an Ebola patient. UCSF's preparations made it only one of several dozen nationwide to be designated an Ebola treatment center. Photo by Susan Merrell

To learn more about UCSF efforts, watch a replay of the Ebola town hall meeting here.