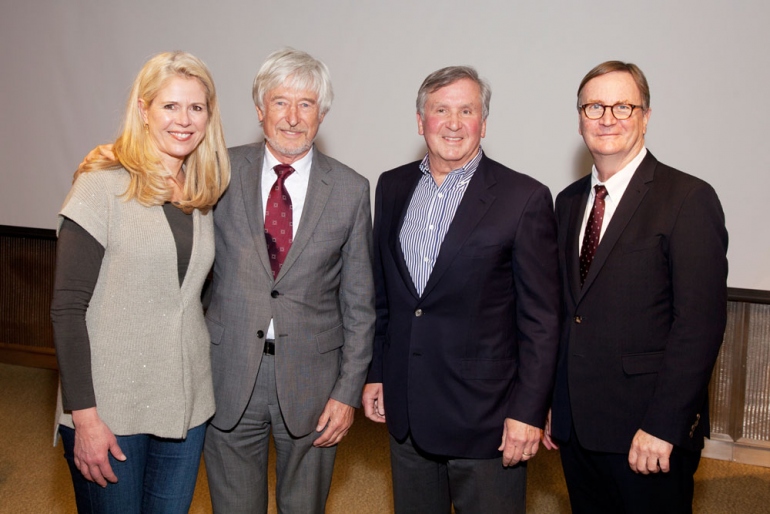 UC San Francisco announced Tuesday that the inaugural Byers Family Distinguished Professorship will be awarded to Regis Kelly, PhD, in recognition of his visionary leadership at QB3, a thriving center of early-stage entrepreneurship and innovation that has capitalized on the premier health sciences research coming out of UCSF.

The professorship is named in honor of Brook Byers and his family, who are longtime champions of innovation at UCSF. A member of UCSF Foundation and co-chair of the Campaign for UCSF, Byers has supported all spectrums of UCSF’s research from basic to translational science that made Byers Hall on UCSF’s Mission Bay campus the home of QB3. He also helped create one of the most visionary venture funds in academia, known as the Mission Bay Capital Fund. To recognize his many contributions, the University awarded Byers the UCSF Medal, its most prestigious honor, in 2007.

As executive director at QB3, Kelly has led the way in bridging academia with industry partners, entrepreneurs and venture capitalists. Under his leadership, QB3 is launching start-up biotech companies, patenting their discoveries and converting them into therapies, tools and devices that improve health and boost the economy.

A joint venture of UCSF, UC Berkeley and UC Santa Cruz, QB3 was the first of its kind among the California Institutes for Science and Innovation established in 2000 by then-Gov. Gray Davis to stimulate science, create new companies and drive the economy. 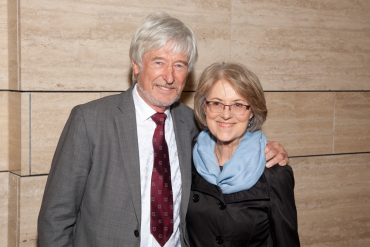 The investment proved timely, as the subsequent recession and the rising cost of health care made it clear that the state needed to build academic-industry partnerships to convert life sciences research into solutions for better health, a sustainable environment and a dynamic economy.

Kelly and Douglas Crawford, QB3’s associate director, created the first startup incubator at the University of California, the “QB3 Garage,” which has expanded into a network of five incubators serving more than 40 companies. Under Kelly’s direction, QB3 partnered with industry, which is essential for early-stage science to move forward. Its partners include Pfizer, Johnson & Johnson and GE Healthcare, to name a few. He also created a fund to support translational research and provide startups with the potential for commercialization to get the resources and advice they need.

To expand this model throughout the UC system, UC President Janet Napolitano appointed Kelly as special advisor on innovation and entrepreneurship in December 2014. In addition to his ongoing role at QB3, Kelly will work closely with leaders at the university’s 10 campuses, five medical centers and three national laboratories. He will also develop external partnerships that drive long-term revenue for the University and maximize the public benefit of UC innovations.

To support this effort, the University has established UC Ventures, a $250 million fund – without using state or tuition funds – to invest in technologies emerging from the 10 campuses.

“We’re delighted that Reg Kelly has been named the first Byers Family Distinguished Professor given his role at the forefront of entrepreneurship at UCSF and given his new role as special advisor on innovation and entrepreneurship at the UC Office of the President,” said UCSF Chancellor Sam Hawgood, MBBS. “Establishing this professorship at UCSF will help fortify the great work that Reg and Brook have been doing together over the last decade through QB3 and will ensure that UCSF will remain at the vanguard of translating fundamental basic research that happens in our labs to find applications to benefit society.”

The distinguished professorship announcement comes at a time when UCSF is marking the 20th anniversary of the Byers Lecture for Basic Science and the 10-year anniversary from when QB3’s headquarters, Byers Hall, opened at UCSF Mission Bay. Byers’ 20-year sponsorship of the Byers Award in Basic Science has shined a light on curiosity-driven research by providing support for mid-career researchers undertaking high-risk, high-reward research.

“Brook understands that great advances in health often begin with the most fundamental discoveries found in our research labs, and his support to our basic science community has been extraordinary,” Chancellor Hawgood said. “Brook is always looking to enhance the innovation ecosystem here at UCSF and I’m delighted that he and his wife Shawn recently decided to build on the powerful investments he has already made to UCSF.”

The announcement of the Byers Family Distinguished Professorship came at the conclusion of the Byers Lecture for Basic Science.

The annual lecture is a highlight for the basic science community and part of the Program for Breakthrough Biomedical Research (PBBR), which uses private philanthropy to support highly innovative, risky and transformative basic science research at UCSF. Established by co-founders Herbert and Marion Sandler, PBBR has generated hundreds of millions of dollars in subsequent grant funding and projects, and their derivatives have resulted in hundreds of publications and dozens of patents.

Learn more about the program

Byers is a member of President Janet Napolitano’s UC Innovation Council, which advises UC's 10 campuses on how to tap potential entrepreneurs and innovators.

“We are truly grateful to Brook and Shawn Byers and their family for establishing this distinguished professorship to help QB3 sustain its public service mission in the years to come,” said Kelly. “We hope that the creation of this distinguished professorship might inspire other campuses to appoint one of its established investigators to a similar role to support innovation and entrepreneurship for public benefit.”

As federal and state funding to support public universities continues to wane, securing more endowed professorships for the faculty is a top priority for UCSF Chancellor Hawgood and John Ford, vice chancellor of University Development and Alumni Relations.

“It is crucial for allowing us to compete with our private peers for top recruits, ensure our faculty have a stable source of support to pursue their most bold and innovative ideas and enables us to see that as much grant money as possible goes to support research,” Ford said.

A neuroscientist, Kelly grew up in a working class family graduated with a bachelor’s degree in physics in 1961 from the University of Edinburgh in Scotland after receiving a scholarship. He earned a PhD degree in biophysics at the California Institute of Technology in 1967. Kelly joined the UCSF faculty in the Department of Biochemistry in 1971. He served as UCSF’s executive vice chancellor and provost overseeing the development of the UCSF Mission Bay campus before becoming director of QB3 in 2004. In recognition of his many contributions to science and innovation, Kelly was awarded the OBE – Officer of the Most Excellent Order of the British Empire – by Queen Elizabeth II.