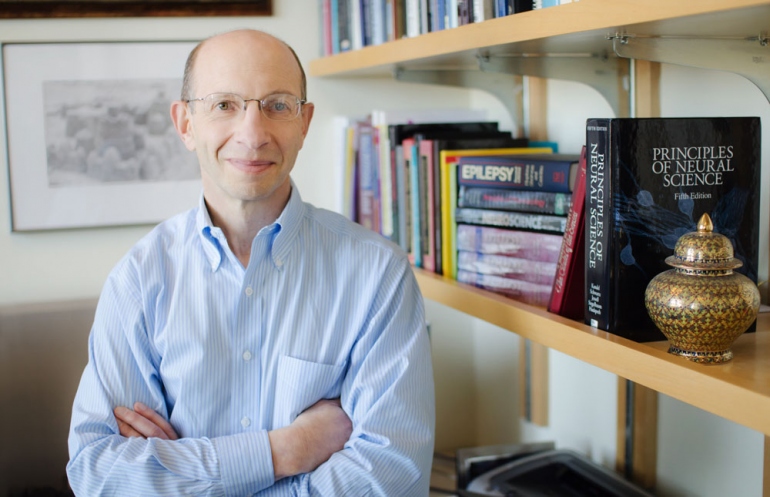 A charismatic high school biology teacher named Brian Biemuller and a trip to Bolivia 38 years ago as a health care volunteer convinced Dan Lowenstein of his direction in life.

“The path was obvious: I wanted to become a doctor,” Lowenstein, MD, said in a 2013 talk about his life’s story. “The mixture of science and humanism, the opportunity to serve others in such a fundamental way, the rawness, the poignancy, the intensity – all lined up to become my dream.”

Lowenstein, professor and vice chair of the Department of Neurology, has been devoted to his dream ever since. His distinguished career encompasses teaching, research and patient care – from his arrival to UCSF in 1987 as an aspiring pediatrics intern to his appointment on Thursday as executive vice chancellor and provost.

“Our singular focus on excellence in all three elements of our mission is what defines the unique greatness of UCSF, and I will do everything I can to help UCSF remain a world leader in life science discovery and innovation.”

For his wealth of experience and passion for UCSF, Chancellor Sam Hawgood, MBBS, tapped the physician-scientist to be second-in-command at the nearly $5 billion enterprise, effective February 1. He succeeds Jeff Bluestone, PhD, who stepped down to devote more time leading diabetes research for which he is internationally renowned.

Lowenstein will lead UCSF’s robust research enterprise, and its highly ranked academic program, consisting of four professional schools and Graduate Division. He will work in close collaboration with the Chancellor and the leadership team to develop and implement campus priorities and vision, including advancing precision medicine, maintaining UCSF’s status as an international leader in health sciences education, and overseeing external partnerships and representing UCSF’s best interests across the University of California system and at the UC Office of the President.

Dan exemplifies excellence in each of our mission areas – research, education and patient care – and has a deep love for our public mission.

“Dan exemplifies excellence in each of our mission areas – research, education and patient care – and has a deep love for our public mission,” Hawgood said. “His values very much reflect those of UCSF, and I am very pleased that he will join me in leading this great University.”

For Lowenstein, the decision to join Hawgood’s new administration came easily: “Quite simply, I love our community and I welcome this opportunity to work in this new capacity with the phenomenal people here.”

As their career paths have crossed over three decades, Lowenstein has watched Hawgood emerge as a leader, amid myriad challenges and changes, including taking over as dean of the School of Medicine in 2007.

“I was so impressed with his leadership through this time. He demonstrated a deep understanding of UCSF and a resolute belief in our mission,” Lowenstein said. “I also appreciate his humanism, selflessness and remarkable awareness of the intricacies of this institution, and his commitment to keep pushing the boundaries of what is possible.”

The same can be said about Lowenstein.

He is universally admired among faculty, staff and students. A legendary educator and mentor, Lowenstein has been lauded with every major teaching award in medical education granted by students and colleagues both locally at UCSF and nationally.

Standing Up for Social Justice

Lowenstein’s love for UCSF comes “from being among faculty who have led the world in scientific discoveries, watching our students graduate, and witnessing the saving and restoring of lives by our health care teams,” he said. “And, of course, there are the times when our community has stood up against the injustices in the world.” 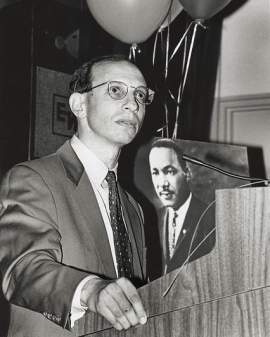 UCSF students did just that in a peaceful demonstration on Dec. 10 to raise awareness of social injustices and racial disparities experienced by black Americans. Their actions and outreach to students across the U.S. started a national movement called #whitecoats4blacklives. “I am so proud of them,” Lowenstein said. “This idea came directly from our students and within five days, they had more than 80 schools from across the country join their movement.”

Lowenstein hopes this is just the beginning of a renewed commitment to fostering equality and inclusion that will be carried out across campus and the country.

He is acutely aware of the ongoing need to ensure that more people of diverse backgrounds have the opportunity to excel to positions of leadership at UCSF. Those who know him well, including many in the under-represented community, appreciate his attitude and advocacy advancing diversity and inclusion at UCSF.

His work in championing diversity and civil rights, as well as his long-standing advocacy for students, staff and faculty of all backgrounds, has been honored by the 1998 Black Student Health Association’s Faculty Award, the 1998 UCSF Dr. Martin Luther King, Jr. Award, the 2006 Holly Smith Award for Exceptional Service to the UCSF School of Medicine, and the 2009 UCSF Chancellor’s Award for Public Service.

He also was honored by students who voted him in 2013 to deliver “The Last Lecture,” during the second year of its existence (after Susan Desmond-Hellmann, MD, MPH, the first woman to serve as chancellor). In an hour-long speech, Lowenstein told his inspirational life story of lessons learned – all a testament to his integrity, inner strength and spirituality.

Watch Dan Lowenstein's "Last Lecture" to the graduating class of 2013.

Lowenstein concluded that lecture with a call to action to continue the march for equality and justice for all. He specifically referred to the rise of the Black Caucus to address the racial discrimination that existed on a then-segregated campus in the 1960s.

“Despite the progress, despite all the effort, our work is not done – including, as I said before, right here at UCSF,” Lowenstein told to the audience in a packed Cole Hall Auditorium. “So, pick something that is far bigger than you and figure out how to contribute, at least in some small way, to this very long march.”

Research in the Era of Precision Medicine

Lowenstein brings the perspective of many roles at UCSF since he himself has been a neurology resident, postdoctoral fellow, epilepsy physician, principal investigator and professor of medicine.

He also has served as vice chair of the Department of Neurology, director of the UCSF Epilepsy Center at UCSF Medical Center and director of the Physician-Scientist and Education Training Programs in the UCSF School of Medicine, the last two titles he will relinquish with his new position.

He has a strong track record as a scientist across the research spectrum. “I've been very fortunate to have been involved in a wide range of scientific approaches, including basic and translational laboratory science exploring developmental neurobiology and basic mechanisms of epileptogenesis, multi-center clinical trials looking at the treatment of prolonged seizures, and large-scale team science investigating the genetics of human epilepsy.” His papers have been published in the Journal of Neuroscience, Neuron, Nature, and the New England Journal of Medicine.

Lowenstein is keenly interested and involved in furthering the promising field of precision medicine.

“I watched President Obama’s [State of the Union] speech and the phrase ‘precision medicine’ did not escape my notice,” Lowenstein said. “UCSF has been at the forefront of this concept, and there is no question that we are at the threshold of an entirely new era in translational science and health care. I can say from firsthand experience it is redefining the world of epilepsy.” 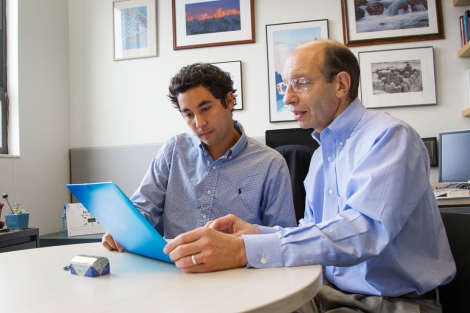 Dan Lowenstein works with a medical student in his office at Parnassus. Photo by Marco Sanchez

Lowenstein has been leading the Epilepsy Phenome/Genome Project (EPGP) and the Epi4K Gene Discovery in Epilepsy project, two large-scale, international studies on the genes implicated in epilepsy, partnering with basic and clinical scientists at more than 40 institutions on four continents to collect actionable data to make treatments more precise for patients. This work has already yielded promising results that highlight how high-quality phenotype data, combined with state-of-the-art genomic analyses, can identify the causes and specific treatments for some of the most intractable forms of epilepsy. That accomplishment is at the core of precision medicine.

He also organized a conference in the San Francisco peninsula city of Half Moon Bay in 2014 titled, “Epilepsy in the Era of Precision Medicine,” the first conference of its kind that brought 100 leaders from around the world to plan a roadmap for research in epilepsy.

In this effort, Lowenstein is in good company at UCSF, one of the world’s leading institutions involved in epilepsy research and one of the few medical centers on the planet with top-ranking departments in the areas most relevant to this research: biomedical imaging, neurology and neurosurgery.

For his many contributions to epilepsy research, Lowenstein received the American Epilepsy Society’s 2001 Basic Research Award, an honor given each year to the foremost basic science investigator whose research “contributes importantly to understanding and conquering epilepsy.”

“The full range and depth of our research enterprise, from fundamental biological science to population science and everything in between, is, quite simply, stunning,” Lowenstein said, “and the contributions of UCSF to the world are incalculable.”

And in this, UCSF’s 150th anniversary year since its start as a medical college, the list of its accomplishments is long. Among the greatest hits he highlights are UCSF’s leadership in HIV/AIDS, the start of a hospitalist movement, cutting-edge interdisciplinary education and world-renowned expertise in molecular biology and its application in understanding science and disease, to name just a few.

“UCSF is the only place on the planet that combines a singular focus on improving health, impassioned creativity and the highest standards of excellence in such wide domains, and a community that truly cares about the success of all,” Lowenstein said. “That’s why I love it here.”

“I am thrilled by the opportunity to work with Dan. I greatly admire his passion for teaching and learning, his collaborative spirit, and his dedication to UCSF. He cares deeply about students and trainees, and I look forward to his leadership in advancing our education mission.”

“Dan is a true visionary and an outstanding leader. He understands UCSF.  It will be a pleasure to work with him in his new role.”

“Dan is a superb educator, a devoted doctor, a dedicated researcher. He loves UCSF. He will serve us all well.”

“No one epitomizes the spirit of collaboration and greater good more than Dan Lowenstein. We are extremely fortunate to have him as our Provost.”

B. Joseph Guglielmo, PharmD
Dean of the School of Pharmacy