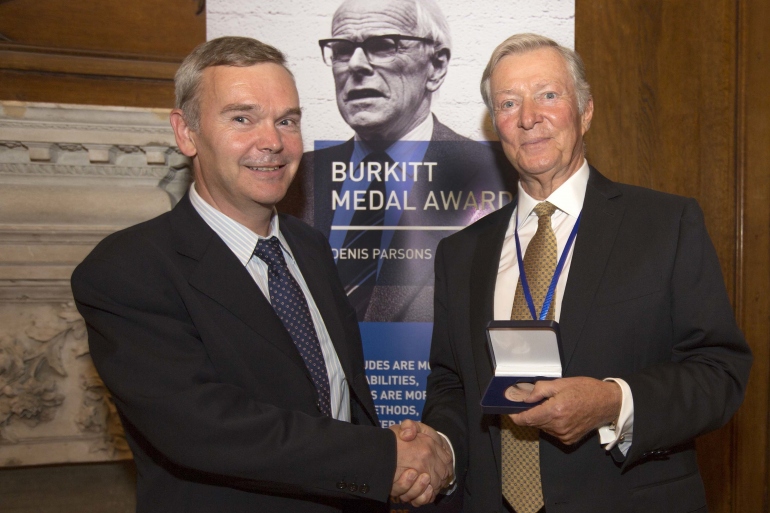 "Dr. Ziegler has made significant contributions to the fields of medical oncology and to global health,” said Owen Smith, professor of medicine and hematology at Trinity College Dublin. “Continuing the legacy of Denis Burkitt, (Ziegler) directed a highly productive research team in Uganda that made dramatic progress to cure a particularly lethal form of childhood cancer. Ziegler’s career amply exemplifies Burkitt’s curiosity, leadership, and humanity."

The Burkitt Medal was presented at a celebratory dinner on Sept. 17 as part of the Ninth International Cancer Conference at Trinity College Dublin.

“I was delighted to be selected for this prestigious award from one of the oldest universities in Europe,” said Ziegler, founding director of Global Health Sciences Graduates Programs Education & Training at UCSF. “Denis Burkitt was my mentor in the early years of my medical career in Uganda. Receiving the Burkitt medal is a great honor.”

Burkitt discovered a cancer of the lymphatic system in 1956 among children in Africa. The disease starts in immune cells called B-cells and is one of the fastest growing human tumors. It can be fatal if left untreated.

“His discovery of Burkitt’s lymphoma opened many doors in cancer research: viral oncogenesis, tumor immunity, and most importantly, the potential for cure with chemotherapy,” Ziegler said. “Burkitt went on to advocate the importance of dietary fiber in health. He was one of my heroes in medicine.”

Leaders at Trinity praise Ziegler and his contributions to the field of cancer research.

“Burkitt's legacy, celebrated at this event, is continued by Dr. John Ziegler,” said Paul Browne, Trinity College Dublin’s dean of the School of Medicine. “Ziegler’s work on cancer, especially in connection with developing countries, is tremendous.”

Guests from Canada, the United States, Great Britain, Germany, France, Malta, Malaysia and Ireland who were participating in the International Cancer Conference attended the event.

Ziegler received his bachelor’s degree in English Literature from Amherst College, in Amherst, Massachusetts, and his MD from Cornell University Medical School in New York City. Following medical house staff training at Bellevue Hospital in New York, he joined the National Cancer Institute (NCI) in 1966, beginning a life-long career in cancer research and care. In 1967 he was assigned to begin a long collaboration with Makerere University in Kampala, Uganda, studying Burkitt’s lymphoma and other indigenous cancers. Together with Ugandan counterparts, he developed curative therapies for lymphoma and established a cancer institute that today has expanded to a major center of excellence in sub Saharan Africa.

After five years Ziegler returned to NCI to head clinical oncology, and in 1981 moved to UCSF. The AIDS pandemic made its first appearance in San Francisco, heralded by opportunistic infections and two malignancies: Kaposi’s sarcoma and non Hodgkin’s lymphoma. Ziegler and colleagues made important contributions to this field both in California and back in Uganda. In his later career, earning an MSc in epidemiology from the London School of Hygiene and Tropical Medicine, Ziegler headed a cancer genetics clinic at UCSF, and most recently was founding director of a global health master’s degree.