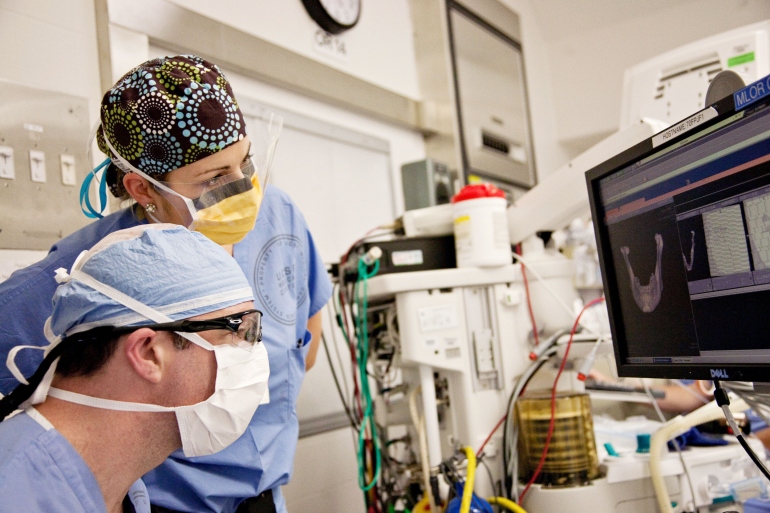 UCSF Medical Center is among the nation's premier hospitals for the 13th consecutive year, ranking as the eighth best hospital in the country in the 2014-2015 America's Best Hospitals survey from U.S. News & World Report, and once again securing a spot among the top 10 hospitals nationwide.

UCSF Medical Center also earned a spot on the survey's honor roll, which highlights just 17 hospitals out of nearly 5,000 nationwide for their expertise in treating the most challenging patients across a range of medical specialties. Hospitals on the Honor Roll placed in the top tier in at least six of the 16 specialties in which U.S. News ranks hospitals. 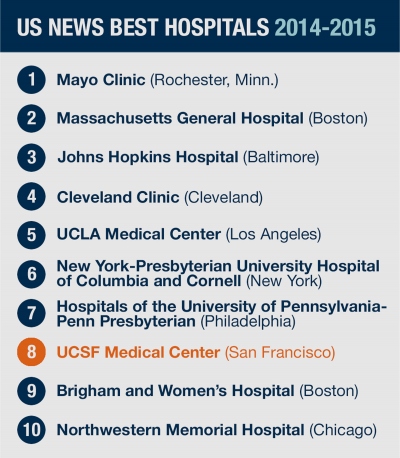 "Patients from all over the country, and even from other parts of the world, come to UCSF because they know they can benefit from the expertise of clinical experts who are at the top of their fields nationally, as well as from the latest research and innovative treatments,” said Mark R. Laret, CEO of UCSF Medical Center and UCSF Benioff Children's Hospitals. “U.S. News’ rankings are a validation of our daily work to provide the best health care possible, and serve as motivation to continue advancing the health care field for future patients.”

In 2012, the hospital implemented one of the most comprehensive electronic health records systems in the United States. Additionally, the hospital was awarded the prestigious Magnet designation for excellence in nursing by the American Nurses Credentialing Center. 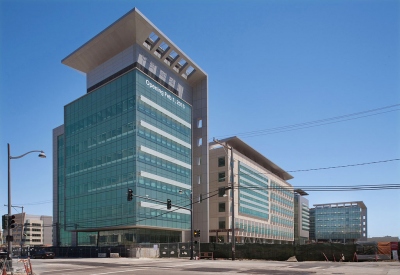 The new UCSF Medical Center at Mission Bay, which will include three new, state-of-the-art hospitals – children’s, women’s specialty, and cancer - is scheduled to open on Feb. 1, 2015. Photo by Mark Citret

The new UCSF Medical Center at Mission Bay, which will include three new, state-of-the-art hospitals – children’s, women’s specialty, and cancer - will open its doors on Feb. 1, 2015. The hospitals will be located adjacent to one of UCSF’s world-renowned research campuses, at Mission Bay, further encouraging the kind of collaboration for which UCSF is known, translating laboratory discoveries into next-generation therapies.

UCSF Medical Center serves as the academic medical center of UC San Francisco. The medical center's nationally preeminent programs include children's health, neurological diseases and disorders, organ transplantation, women's health and cancer. With about 770,000 patient visits and 38,000 hospital admissions each year, it operates as a self-supporting enterprise within UCSF, generating about $1.6 billion in revenue to cover the operating costs of providing patient care.

U.S. News publishes the annual Best Hospitals rankings to help guide patients who need a high level of care because they face particularly difficult surgery, a challenging condition, or extra risk because of age or multiple health problems. Objective measures such as patient survival and safety data, the adequacy of nurse staffing levels and other data largely determined the rankings in most specialties.

“The data tell the story – an Honor Roll hospital has much to be proud of,” said U.S. News Health Rankings Editor Avery Comarow. “Just 144 hospitals, or about 3 percent of the nearly 5,000 we evaluated, earned national ranking in even one specialty, let alone put up top scores in six specialties.”

The specialty rankings and data were produced for U.S. News by RTI International, a leading research organization based in Research Triangle Park, N.C. Using the same data, U.S. News produced the state and metro rankings.

The rankings were published online on July 15 and will appear in the U.S. News “Best Hospitals 2015” guidebook, available in August.