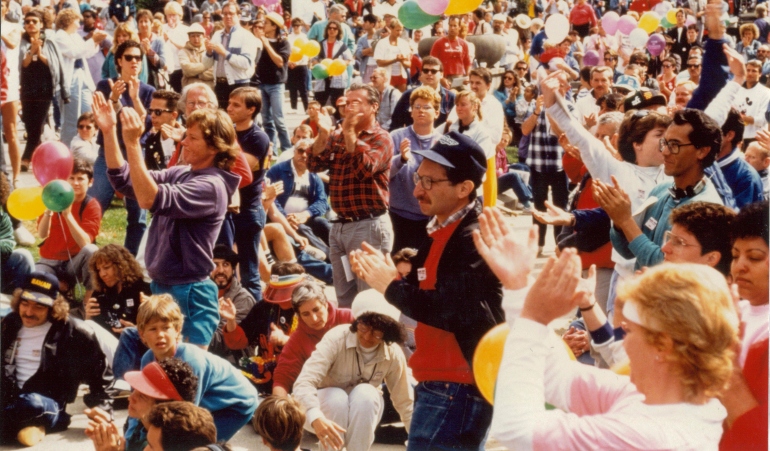 Terri Sonoda considers herself a reluctant “cat lady.” She inherited her first three cats in the early 1980s from friends and neighbors in San Francisco who had passed away due to complications of HIV/AIDS.

She watched the Castro neighborhood of San Francisco quickly transform from a bubbling LGBT mecca to an evaporated ghost town.

“One day signs popped up on telephone poles saying watch out for the gay cancer and soon after that the streets became abandoned and depressed,” Sonoda said. “At the time, I worked in an office where all the gay men contracted AIDS or died from it.”

Sonoda, a project coordinator with the UCSF Center to Address Disparities in Oral Health, wanted to do something to honor the memory of her friends. She found an opportunity in 1987, when the first AIDS Walk San Francisco occurred. It was a cathartic way for those affected by HIV/AIDS to bring awareness to this life-threatening disease.

“Back in the ‘80s, AIDS made people go from vibrant, virile and beautiful to aged, skinny, extremely ill and then dead in months,” Sonoda said. “It was a scary time.”

In the early 1980s, UCSF led the charge in treating people with HIV/AIDS. Ward 86 at San Francisco General Hospital and Trauma Center (SFGH) was the first HIV/AIDS-specialized clinic to open its doors to patients, and quickly became an international leader in care and research.

While many hospitals refused to care for people with HIV/AIDS at the time because not enough was known about the disease, UCSF faculty members were pioneers in the discovery, research and treatment of AIDS. Some at the forefront include Paul Volberding, MD; John Greenspan, BDS, PhD; Deborah Greenspan, DSc, BDS; Donald Abrams, MD; Marcus Conant, MD; and Jay A. Levy, MD.

“Ward 86 at SFGH was someplace you didn't want to hear your friends were,” Sonoda said. “I am grateful for all the work UCSF people have done and how effective they have been in helping to rein in the epidemic.”

Molly Newlon, DDS, MA, remembers that era vividly. She graduated from dental school in 1982, at the beginning of the AIDS crisis. Through the years, she has seen the evolution in attitude, fear and treatment of HIV-infected patients.

“A patient of mine who was at the end of his disease really wanted porcelain veneers to be done before he died,” said Newlon, director of health and safety at the UCSF School of Dentistry. “He really wanted a nice smile at the end. It meant so much to him to leave this life looking good. I did the work and he was thrilled. He died several months later, but I felt that at least he could give everyone a big smile. It meant so much to him, and it made his life a bit happier in the end.”

Jennifer Dowd got involved with the AIDS Walk at the encouragement of her friend and former colleague Red Mangio. He was the UCSF AIDS Walk champion until he passed away in 2006.

“Red rallied people like me to participate, fundraise and volunteer like no one I've ever met before,” said Dowd, a retail services manager at UCSF. “He had tremendous joy and enthusiasm for bringing the UCSF community together for this wonderful cause. UCSF is a better place because Red was here for 17 years to show us the way.”

The atmosphere at AIDS Walk San Francisco has evolved over the years, going from somber to hopeful. People are living longer with HIV/AIDS, and an HIV-positive diagnosis is no longer a death sentence as it was in the 1980s. 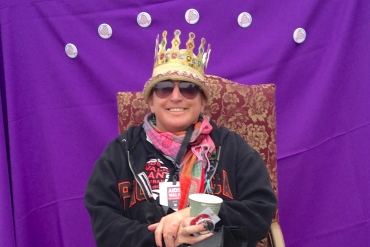 Jennifer Dowd got involved with AIDS Walk San Francisco because of her friend and former colleague Red Mangio. He inspired Dowd and others at UCSF to get involved in the AIDS Walk. Photo courtesy of Jennifer Dowd

"AIDS Walk San Francisco is a wonderful way to bring our faculty, staff and students together to take steps to eliminate this epidemic,” said Jennifer Mannix, arts and events manager at Campus Life Services who also leads the various AIDS Walk teams at UCSF. “The event also gives our UCSF community a chance to walk together and get to know each other.”

For long-time AIDS Walk participants like Sonoda, this time of the year is a chance to remember and bond with those who have lost loved ones to AIDS or are fighting to find a cure.

“I am happy that UCSF has such strong participation in the AIDS Walk,” Sonoda said. “It’s appropriate because we are still at the forefront in the battle against AIDS.”

Her original three cats have long since passed away, and Sonoda has grown to love her feline companions. She now owns seven cats.

All are rescue animals. And none has been orphaned from friends who left before their time. 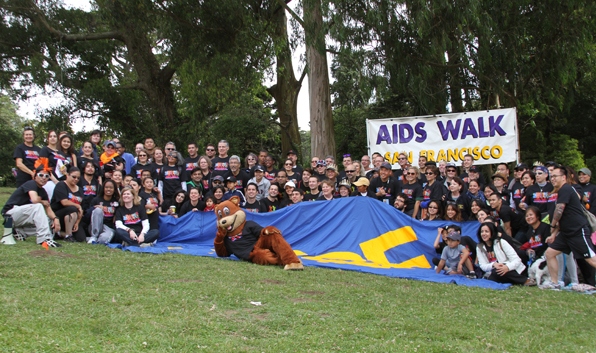 Members of the UCSF AIDS Walk team gather for a group photo at Golden Gate Park before the start of the 2012 AIDS Walk San Francisco. Photo by Leland Kim

Last year, UCSF teams raised $71,573, the third highest total among all Bay Area groups. They hope to beat that, setting a new goal of $75,000 this year. Currently, UCSF has 19 registered teams affiliated with the University.