Members of the 2011 UCSF team talk about why they participate in AIDS Walk San Francisco, which raises money for programs and services.

Members of the UCSF community are asking friends, family and colleagues to join them in the annual AIDS Walk San Francisco on Sunday, July 15.

During the 25th anniversary of the AIDS Walk last year, all teams combined raised nearly $3 million to provide services that improve the quality of life for thousands of people living with HIV/AIDS and focus prevention efforts on those at greatest risk of contracting the disease.

This year, the UCSF AIDS Walk Steering Committee has set a goal to raise another $55,000 this year.

The UCSF community is invited to a special screening of "Life Before the Lifeboat," a documentary about San Francisco's early response to the AIDS epidemic.
Read more

To kick off the 2012 AIDS Walk, UCSF will host a special showing of the film, "Life Before the Lifeboat," a documentary that is the brainchild of UCSF AIDS pioneering physician Paul Volberding, MD, now director of the AIDS Research Institute at UCSF. The campus community is invited to the kick-off event, which is slated for Tuesday, June 12 at noon in the School of Nurisng building, room N 217 on the Parnassus campus.

This documentary features Volberding in intimate conversations with some of San Francisco's courageous leaders from the earliest days of the AIDS epidemic when the UCSF-affiliated San Francisco General Hospital was ground zero. The 30-minute film highlights how political and gay activists, along with health care professionals at SFGH, UCSF and other medical centers, came together to respond in the early years of the AIDS epidemic in San Francisco.

So far, UCSF is being represented by 13 different teams, including UCSF Global Health Sciences, which has taken an early yet significant lead in raising nearly $3,000. The team that raises the most money again this year will win the UCSF AIDS Walk Trophy, which has been awarded for the past two consecutive years to the Global Health Sciences team led by Robert Mansfield.

Besides winning the trophy and bragging rights, the UCSF team that raises the most money this year will be treated to a reception with food and beverages at UCSF Mission Bay. Details will come on date and exact location of that event.

Faculty, staff, students and trainees may join any of the 13 teams registered on the AIDS Walk San Francisco website.

And like last year, those who contribute at least $25 to the cause will get an official UCSF AIDS Walk T-shirt and can enjoy the comraderie of their colleagues with a free breakfast and lunch on the day of the walk.

"UCSF has been a leader in fighting the AIDS epidemic since it started 30 years ago through its research, patient care and education," says Jennifer Mannix, co-chair of UCSF's AIDS Walk steering committee and a manager with Campus Life Services. "We want to continue UCSF's legacy in public service by participating in this annual community-building event. One way UCSF is advancing health worldwide is by acting locally to support HIV/AIDS programs and services."

Since the very first AIDS Walk San Francisco in 1987, UCSF has been a strong presence in the fundraiser that enables the San Francisco AIDS Foundation, and many other HIV/AIDS service organizations throughout the Bay Area, to provide prevention, care, and advocacy programs for thousands of men, women, and children living with HIV/AIDS. Some of the beneficiaries of the 2012 AIDS Walk include the UCSF Alliance Health Project, formerly called the AIDS Health Project. 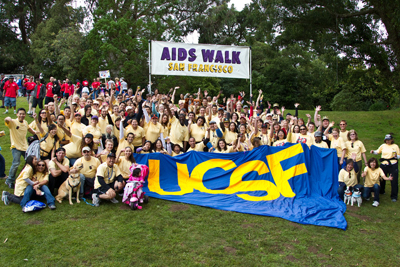 UCSF's team poses for a photo before the 2011 AIDS Walk San Francisco.

The UCSF Alliance Health Project is hosting an open house on Friday, June 15, beginning at 4:30 p.m. More details are available on this flyer [PDF]. AHP works to support the health and wellness of the lesbian, gay, bisexual, transgender and queer and HIV-affected individuals in leading healthy and meaningful lives. At that event, the Levi Strauss Foundation will honor James Dilley, MD, for his 28 years of leadership.

Designed to raise needed funds for San Francisco AIDS Foundation, and to battle the stigma that so many associated with HIV/AIDS, the first AIDS Walk raised $667,000 with the help of more than 6,000 compassionate Bay Area residents. Over the past 25 years, AIDS Walk San Francisco has drawb thousands of people to walk, millions more to donate, and has raised nearly $77 million to fight HIV/AIDS.

Although UCSF has been at the forefront of many advances in HIV treatments and therapies in recent years that have dramatically improved the quality of life and life expectancy of persons with HIV/AIDS in the U.S. and other developed countries, there is no cure.