Deadly skin cancers in mice shrank in response to a new treatment that may complement other “immunotherapies” developed recently to boost the body’s own defenses against disease threats, according to a new study published by UC San Francisco researchers in the May 2014 edition of the Journal of Experimental Medicine.

Using a mouse version of a human drug that is popular for treating osteoporosis, the UCSF researchers discovered a way to manipulate the thymus, a gland situated at the base of the neck above the heart, to alter its activity so that some of the specialized immune cells that pass through it will go on to battle cancer cells. 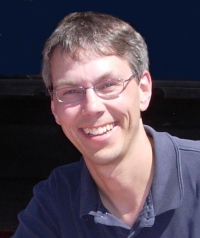 “After treatment, mice that normally would be dead in a week or two rejected tumors and survived,” said Mark Anderson, MD, PhD, an immunologist with the UCSF Diabetes Center and the leader of the study.

The thymus plays a key role in educating T cells of the immune system about which molecules encountered within the body belong to microbes and ought to be attacked, and which are a normal part of the body and ought to be tolerated.

Anderson and colleagues have changed this education curriculum to better fight cancer. Normally, the immune system regards tumor tissue as a part of the body, and therefore does not target the molecules found on tumor cells.

As blood courses through the inner part of the thymus, specialized thymus cells cull the subset of T cells that targets the body’s own tissues, so that these tissues are not attacked by the immune system, a phenomenon called central tolerance. Anderson turned the tables, removing the thymus cells that cull the T cells.

The researchers marked these thymus cells for destruction by targeting a protein molecule they need to develop normally, called RANK-L. Treatment that inhibited RANK-L reduced their numbers by more than 90 percent. As a result of the elimination of the thymus cells, T cells that target tumors survived and escaped central tolerance. Just two weeks of treatment was sufficient to generate enough tumor-specific T cells to destroy deadly melanoma skin cancers in the mice.

One theoretical concern with the anti RANK-L strategy, Anderson said, is autoimmunity, in which the immune system destroys normal tissue, because the process of learning to tolerate “self” molecules is disrupted by treatment. 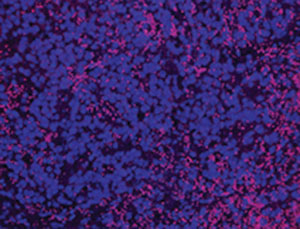 UCSF researchers led by Mark Anderson, MD, PhD, have found a way to get the immune system's T cells to attack cancer. T cells (red) are shown attacking the cells of a melanoma tumor (violet). Photo by Mark Anderson

Although the researchers detected T cells that target molecules found on normal tissue, they did not observe significant autoimmune reactions in treated mice. In addition, within ten weeks of stopping treatment, immune responses were back to normal.

RANK-L plays a role not only in the development of specialized thymus cells, but also in the development of other types of cells in the body, including the osteoclasts that break down bone. The UCSF researchers used a mouse antibody targeted against RANK-L, but a human antibody directed against RANK-L forms the basis of the long-term osteoporosis treatment denosumab, which preserves bone mass by targeting osteoclasts.

Anderson suggested that patients treated with denosumab should be periodically evaluated for signs of autoimmunity or other defects in central tolerance.

Arousing the body’s own immune defenses to fight cancer using immunotherapy drugs is a recent success story, with ipilimumab, a drug first developed and tested by UCSF and UC Berkeley researchers, now FDA-approved for the treatment of melanoma.

Ipilimumab turns off the brakes that restrain the immune system, acting on immune cells throughout the body. The new strategy developed by Anderson’s lab team also releases the brakes on immune cells itching for a fight. But it is a distinctly different and complementary approach.

Among the additional UCSF authors are postdoctoral fellows Maria Mouchess, PhD, and Yafei Hou, PhD; Lawrence Fong, MD, a UCSF oncologist and professor of medicine; and Imran Khan, an MD/PhD graduate student. Maureen Su, MD, assistant professor of pediatrics at the University of North Carolina, also is a study co-author.

The research was funded by the National Institutes of Health, by the UCSF ISIS Postdoctoral Scholars Program, and by the UCSF Medical Scientists Training Program.