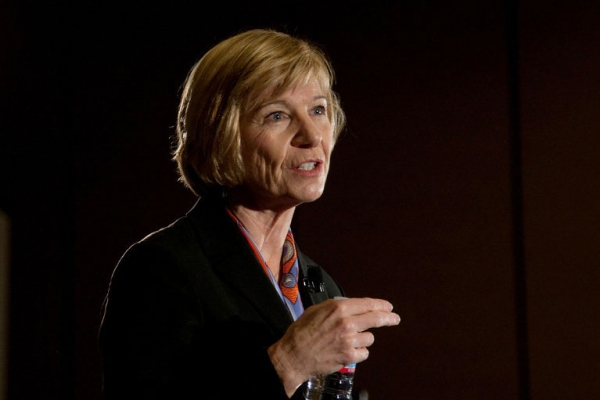 Susan Desmond-Hellmann, MD, MPH, is stepping down from her position as chancellor of UC San Francisco at the end of March, to become the chief executive officer of the Bill & Melinda Gates Foundation, University of California President Janet Napolitano announced Tuesday.

Pending approval from the UC Board of Regents, Napolitano plans to appoint UCSF School of Medicine Dean Sam Hawgood, MBBS, to serve as interim chancellor. She also plans to convene a search committee in early January to begin the effort to select the next UCSF chancellor.

► Read the Chancellor's letter to the UCSF community

Desmond-Hellmann will assist in the search, will maintain her faculty appointment at UCSF and remain an active member of the UCSF family, Napolitano said.

In praise of Desmond-Hellmann’s contributions to UCSF, Napolitano said, “With acrobatic precision, the Chancellor developed and executed an ambitious and creative vision for the campus, while navigating it through one of the worst fiscal crises in UC’s history. She has been a champion of diversity, transparency and public service. Development of the [UCSF] Benioff Children’s Hospital and her innovations in health care delivery are but two examples of her impact, not just on UCSF but also on the community it serves and within the broader realm of global health.”

She added that Desmond-Hellmann will leave UCSF “a better, more vibrant institution than when she arrived … the true measure of leadership.”

“Chancellor Susan Desmond-Hellmann has proven a dynamic, dedicated, passionate, and visionary leader for UCSF. For nearly five years, she has maintained this university as the crown jewel of public research institutions nationwide, the top public recipient of NIH research funds. She has kept this center of higher learning – and our city – on the cutting edge of innovation, medicine, and scientific progress."

"She partnered with our City to make Mission Bay the center of cutting edge biotechnology and life science discoveries, and she helped make San Francisco the Innovation Capital of the World. I thank Chancellor Desmond-Hellmann for her work on my Education Leadership Council, advising me on education issues, developing a plan to save City College and preparing our youth for the jobs of the 21st Century economy.

Desmond-Hellmann, a physician, pioneering cancer researcher and successful biotechnology industry executive, became chancellor of UCSF in August 2009. Under her leadership, she advanced UCSF’s excellence in patient care, research and education, and its public mission.

UCSF Medical Center continues to rank among the best nationwide. Its schools of dentistry, medicine, nursing and pharmacy as well as its Graduate Division all rank among the most prestigious. Outstanding fundraising efforts included the recent establishment of a $60 million dollar endowment for the Discovery Fellows Program, which will continue to allow the finest trainees to study at UCSF. Its research enterprise, which Desmond-Hellmann describes as a “powerhouse … despite an intensely competitive environment,” has made UCSF the top publicly funded university in the United States.

Among Desmond-Hellmann's most distinguishing contributions was establishing precision medicine – which aims to collect and analyze massive amounts of data (genomic, molecular, environmental and clinical) to identify the root causes of diseases and to develop targeted therapies to treat them – as a goal for UCSF and the nation. In May, she convened the OME Summit, bringing together the world’s leaders in precision medicine to advance this burgeoning field.

“We have incredible momentum on many fronts,” she wrote in her message to the UCSF community announcing her departure, “and I have great confidence in the people of our university and the likelihood for even greater future success.” 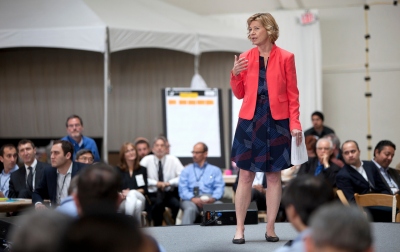 Chancellor Susan Desmond-Hellmann speaks at the OME Summit, which brought

The chancellor came to UCSF from Genentech, where she was responsible for Genentech’s preclinical and clinical development, process research and development, business development and product portfolio management. During her time there, several of the company’s patient therapeutics were approved by the U.S. Food and Drug Administration, and the company became the nation’s No. 1 producer of cancer drug treatments.

At the Gates Foundation, Desmond-Hellmann will collaborate with partners around the world to take on the challenges of extreme poverty and poor health in developing countries and improving America’s education system.

Her hope in taking on her new role, she wrote to the UCSF community, is “that my leadership can contribute to creating a more equitable world.”