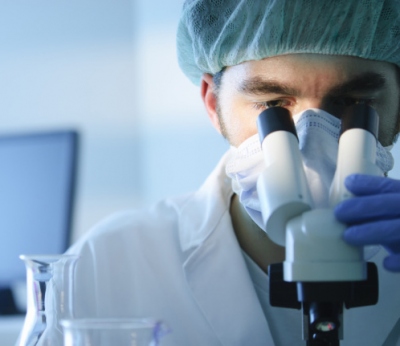 The protein in cells that most often drives the development of cancers has eluded scientists’ efforts to block it for three decades – until now.

Using a new strategy, UC San Francisco researchers have succeeded in making small molecules that irreversibly target a mutant form of this protein, called ras, without binding to the normal form. This feature distinguishes the molecules from all other targeted drug treatments in cancer, according to the researchers.

The protein has long been viewed as an obvious target for drug treatment in cancer, but since the 1980s drug candidates developed by several companies to block ras function have failed in clinical trials.

The UCSF research group, led by Kevan Shokat, PhD, a Howard Hughes Medical Institute investigator and chair of the UCSF Department of Cellular and Molecular Pharmacology, designed small molecules that attach irreversibly to ras within a previously unknown, normally short-lived pocket that appears on the mutant protein as it changes shape.

Their work was published online Nov. 20 in the journal Nature.

Many experienced pharmaceutical chemists had come to regard ras as undruggable, Shokat said. Among the failed strategies were conventional approaches aimed at designing small molecules to compete with the molecule called GTP, which naturally activates ras within the cell. GTP binds so tightly to ras that it is difficult for any drug to compete by binding instead and blocking activation.

But given its importance and the fact that few new cancer targets have been identified recently, drug companies have begun giving ras research another chance.

In its normal form, ras plays a key role in driving cell growth. When it is mutated, and thus activated in an uncontrolled manner, it triggers a chain of events within a tumor cell that includes abnormal activation or inhibition of other genes that then promote cancer. Some of the proteins encoded by these downstream genes have been targeted by promising treatments now in clinical trials. But tumors with abnormal ras often do not respond well to these single therapies, pushing researchers to evaluate various combinations of drugs.

The latest achievement further justifies a renewed interest in ras in the cancer research community and pharmaceutical industry, according to Frank McCormick, PhD, FRS, an expert on cancer biochemistry. McCormick is also the founder of Onyx Pharmaceuticals, director of the Helen Diller Family Comprehensive Cancer Center at UCSF, and now a leader of a new, $10-million-per-year initiative launched this year by the National Cancer Institutes to target ras.

“Cancers driven by ras are the most difficult to treat and are excluded from other targeted therapies, as they fail to respond,” McCormick said. “Dr. Shokat and his team have taken a brilliantly innovative approach to this tough target, and, for the first time, have developed a strategy for targeting a mutant form of ras with exquisite specificity.”

A mutated ras gene is the quintessential human “oncogene,” one in which small alterations in the gene’s DNA change its genetic blueprint, and thus the shape and function of the protein it encodes, or the amount of protein produced. The change converts the protein from one that helps guide normal growth and development into one that drives abnormal growth.

In some cases, a mutation that switches out just one of the DNA building blocks sequenced together to make a gene can alter the function of the resultant protein and lead to cancer.

Scores of oncogenes now are known, but, according to Shokat, “Ras was actually the first human oncogene found to be activated by a single point mutation. People have tried to drug every part of ras and looked at every nook and cranny on it and screened a million compounds and never found anything that inhibits it well.”

Shokat and colleagues engineered molecules that inhibit the activity of ras in which a single point mutation caused a change in one specific amino acid among the hundreds that link and fold to determine the protein’s form and function. The drug-like molecules depend on binding to a cysteine amino acid that is abnormally present near the newly identified pocket in the mutant ras.

Shokat is using the best ras inhibitor to come out of the study as a template for further drug development. UCSF has applied for a patent covering this lead compound, and licensed the intellectual property to Araxes Pharma, a new company co-founded by Shokat to advance development of a drug to target ras. The start-up has formed a partnership with Janssen Biotech, a subsidiary of Johnson & Johnson.

Because the molecules Shokat’s research group created block only a mutant, cancer-driving form of ras, and not the normal ras found in the cells of healthy tissue, a drug developed according to this approach should have great specificity in targeting cancer while sparing normal tissue, Shokat said.

Co-authors of the study include MD/PhD student Jonathan Ostrem, PhD; postdoctoral fellows Ulf Peters, PhD, and Martin Sos, PhD; and James Wells, PhD, chair of the Department of Pharmaceutical Chemistry in the UCSF School of Pharmacy.