UCSF neuroscientist Jonah R. Chan, PhD, has been named the winner of the inaugural Barancik Prize for Innovation in MS Research for developing a technique that will allow scientists to conduct better experiments and more rapidly evaluate potential drug therapies for multiple sclerosis (MS).

Awarded by the National MS Society and including a cash award of $100,000, the prize recognizes Chan’s creation of a unique system for studying oligodendrocytes, cells that wrap themselves around the thin nerve-cell extensions called axons that transmit signals in the brain. Much like the plastic covering on electrical wiring, the fatty sheath formed by oligodendrocytes, known as myelin, provides insulation that is crucial to quick, efficient communication among neurons. 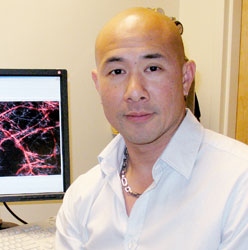 In MS, the immune system goes awry and attacks myelin, resulting in poor neural conduction and a range of progressively worsening symptoms including fatigue, numbness, pain, problems with walking and balance, and impaired vision.

Chan, the Debbie and Andy Rachleff Professor of Neurology at UCSF School of Medicine, studies the biology of oligodendrocytes in the hopes of discovering ways to repair damaged myelin in patients with MS.

Oligodendrocytes have traditionally been studied in cell culture along with nerve cells or in brain slices, but using these methods, it is difficult to isolate the mechanisms of myelination – the cues that prompt the cells to wrap themselves around the axon and create a layer of myelin – and more challenging to use high-throughput techniques to assess the effects of drugs and other factors on this process.

In experiments Chan has conducted over the past several years, engineered polystyrene nanofibers have served as stand-ins for axons. After seeding these nanofiber scaffolds with the cellular precursors of oligodendrocytes, members of Chan’s lab could closely observe how oligodendrocytes are formed and where they migrate, and which “microenvironments” are most conducive to the creation of myelin. In this work, Chan discovered that myelination is more readily triggered in oligodendrocytes by fibers of a larger diameter, and does not depend on biochemical signals from the axon.

In the work that garnered the Barancik Prize, Chan is building on these findings with a system he has dubbed BIMA (Binary Indicant for Myelination Using Micropillar Arrays), in which arrays of fabricated microscopic pillars act in place of axons. Oligodendrocytes form myelin around each of these micropillars, just as with the nanofibers, but the advantage of BIMA is that Chan can view myelination from above and below, giving him a cross-cut view of myelin wrapping that can be quantified, somewhat like counting the rings of a tree.

Chan has added automated methods to BIMA that allow him to rapidly test the effects of potential drugs on myelination. He and his colleagues are using this approach to screen thousands of compounds in search of drug candidates that may accelerate or promote remyelination in MS. Some of these compounds have already been approved by the FDA as safe for other conditions, so Chan’s hope is that promising candidates could be rapidly moved into clinical trials in people with MS, a strategy that could shave years off the search for new treatments.

“Receiving the Barancik prize is a great honor, especially as I consider the other nominees to be such extraordinary scientists and clinicians,” said Chan. “This prize acknowledges not only my efforts, but also the efforts of my colleagues and the talented students and postdocs that I have had the pleasure to work with. This award validates our work, encourages us to be more daring in our science, and is a reminder that it is a privilege to contribute to something greater than ourselves.”