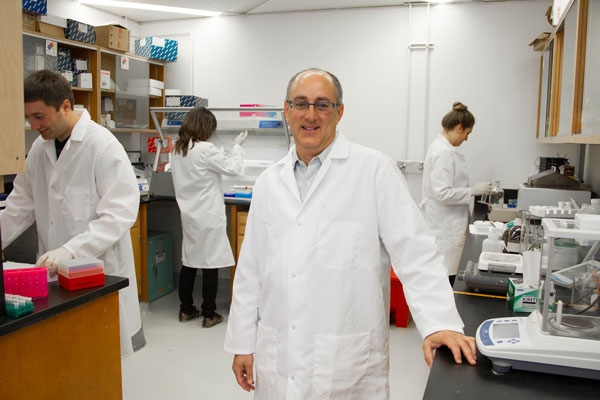 Scott Baraban, PhD, and his team found that an antihistamine may help prevent a form of childhood epilepsy called Dravet Syndrome.

An antihistamine discovered in the 1950s to treat itching may also prevent seizures in an intractable form of childhood epilepsy, according to researchers at UC San Francisco who tested it in zebrafish bred to mimic the disease.

The researchers said their unexpected discovery offers a glimmer of hope for families of children with Dravet Syndrome, a rare genetic disorder that manifests in early childhood with disabling, lifelong consequences. These include dozens, if not hundreds, of daily seizures, as well as profound cognitive and social deficits.

screen drugs with a microscopic electrode just 1 micron in diameter.

“It is very unfortunate for these children and families, as they often live from seizure to seizure,” said Scott C. Baraban, PhD, lead author of the article, UCSF William K. Bowes Jr. Endowed Chair in Neuroscience Research and professor of Neurological Surgery.

Small, translucent and easy to breed, zebrafish are increasingly being used in place of rodents to screen drugs for rare genetic disorders. But no one had used them for epilepsy drug screening until Baraban’s team found zebrafish with a genetic mutation identical to the one that causes Dravet Syndrome.

Baraban said his method of drug discovery could be used to screen drugs for any form of epilepsy caused by mutations in a single gene – a number of which were recently discovered in another UCSF study on epilepsy.

The finding is described in a paper published online in Nature Communications on Sept. 3.

Dravet Syndrome usually develops because of mutations in the SCN1A gene, which codes for proteins in sodium ion channels. These channels act as pores that allow charged ions to pass through the membranes of neurons and regulate how they fire. In Dravet Syndrome, these channels let in too many ions and the neurons fire excessively, causing seizures. Other forms of genetically-caused epilepsy involve similar problems in potassium and calcium channels.

While some adult forms of epilepsy can be treated by surgically removing small areas of electrically malfunctioning brain tissue, genetic forms of epilepsy cannot, because they involve neurons all over the brain. Instead, researchers are focusing their efforts on finding effective drugs.

Baraban’s team discovered the efficacy of clemizole, which had previously been used only as an antihistamine and an antiviral drug, by accident.

Since antihistamines can make seizures worse, it’s unlikely he would have focused on the drug if he hadn’t used a study design intended to circumvent bias about which drugs might work. Instead of beginning with a hypothesis based on previous findings, Baraban used a random assortment of 320 compounds in a chemical library of drugs that had already been approved by the Food and Drug Administration. He did not look to see what the drugs were until after he had his results.

Why clemizole works is still a mystery. Baraban’s group tried 10 other antihistamines, four mentioned in the paper and six others since then, and none blocked seizures. Baraban concluded that the antihistamine itself was probably not the mechanism of the drug’s anti-seizure effect and plans future studies to try to figure this out.

This study used mutant zebrafish discovered a few years ago by then-UCSF neuroscientist, Herwig Baier, PhD, now at the Max Planck Institute of Neurobiology in Germany. By chance, one strain of the fish had a mutation in the same sodium channel gene as the one implicated in Dravet Syndrome. 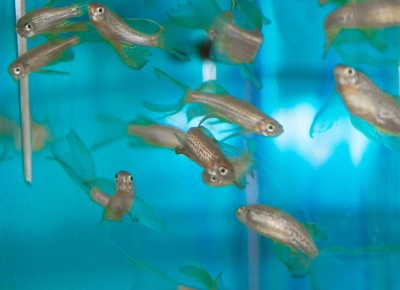 Zebrafish in the Baraban lab

The mutant fish also showed the same developmental pattern as children, whose seizures do not begin until after their first year. In fish, seizures began three days after fertilization. The fish typically died at 10 or 12 days. People with Dravet Syndrome are also vulnerable to sudden unexpected death in epilepsy, or SUDEP.

In these studies, Baraban and colleagues worked with larvae no larger than a human eyelash. They measured their brain activity with a micro-electrode just 1 micron in diameter and tracked their tiny, convulsive movements with special software. He said the seizures in these mutant fish closely resembled those in humans with Dravet Syndrome. Since the larvae are so small and easy to work with, they can screen five times as many drugs in his small laboratory as a much larger lab can do with rodents.

Baraban said that it’s important to use whole animals in screening drugs for epilepsy, since it arises from the activity of neural circuits containing many thousands of cells. Even so, his team plans to conduct lab studies to test clemizole’s effect on individual neurons generated from patients with Dravet Syndrome, using induced pluripotent stem cell (iPSC) technology, as a preliminary step before testing the drug in people.

Baraban is a member of the Eli & Edythe Broad Center of Regeneration Medicine and Stem Cell Research. Other authors of the article, “Drug screening in Scn1a zebrafish mutant identifies clemizole as a potential Dravet syndrome treatment,” include senior staff research associate Matthew T. Dinday, BA, and Gabriela A. Hortopan, PhD, a postdoctoral fellow. Both work in Baraban’s Epilepsy Research Laboratory.

The research was funded by an Exceptional, Unconventional Research Enabling Knowledge Acceleration (EUREKA) grant from the National Institute of Neurological Disorders and Stroke, the Dravet Syndrome Foundation and Citizens United for Research in Epilepsy.

The UCSF Office of Innovation, Technology and Alliances filed a provisional patent on use of the compound to treat epilepsy.