The UC Board of Regents on Wednesday approved an increase in contributions to the UC Retirement Plan (UCRP) from both the university and employees, effective July 2014.

The action is part of a broader effort to maintain financially sustainable pension benefits for employees.

Under the measure, UC will pay 14 percent of pay and faculty and staff will pay 8 percent of pay beginning July 1, 2014. The increases apply to current employees in the 1976 Tier of UCRP (named for the year the plan provisions were effective). UC currently has no plans to increase employee contributions beyond the proposed 8 percent; however, UCRP funding is evaluated on a year-by-year basis. The university’s employer contributions are projected to continue to increase over time.

UC now pays 12 percent and employees in the 1976 Tier contribute 6.5 percent of their pay. The current contributions, which went into effect on July 1, cover the annual cost of the plan for the first time since contributions were reinstated.

Both the University and faculty and staff began again contributing to the pension plan in April 2010. In September 2010, the Regents approved incremental increases in contributions over a two-year period. The 6.5 percent for employees and 12 percent for UC effective July 1 are the last of the increases approved in 2010.

UC continues to pursue other measures to improve the funded status of the retirement plan, including advocating for additional support from the state.

The systemwide Academic Council voted unanimously to support the increases for 2014.

“We know how important our pension benefits are to our faculty and staff, and we are committed to maintaining them,” said Dwaine B. Duckett, vice president of systemwide Human Resources. “At the same time, the reality is that both the university and employees must contribute to the pension plan in a way that ensures its long-term viability.

The future contribution increases approved today apply only to employees who became UCRP members by June 30, 2013. Employees hired or re-hired on or after July 1, 2013 are subject to contributions associated with the new 2013 Tier.

Changes to UCRP contribution rates are subject to collective bargaining for represented employees. 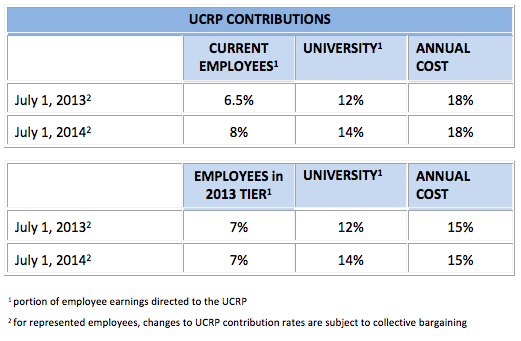 The chart above shows total costs for each tier, along with contribution levels from UC and employees.