More than 150 top leaders in government, science, technology, business and academia came together last week to not just discuss precision medicine, but develop strategies for making it a reality within the next decade.

Participants at the unprecedented and unconventional summit, held at the Mission Bay campus on May 2 and 3, addressed many of the current obstacles in the emerging field of precision medicine, which seeks to build a global network of health data that allows researchers, clinicians and patients to share information that  ultimately can lead to cures and save lives.

See what went on during last week's summit by using the Twitter hashtag #OME2013.

Among the obstacles are identifying the resources to create the infrastructure necessary to collect and analyze the wealth of genetic and other biological data, and generating public awareness and trust about precision medicine to overcome privacy concerns.

“Today people are diagnosed with diseases – diabetes, breast cancer, lung cancer – and precision medicine is about connecting the dots in a new, data-driven way so we can understand the underlying biology,” Desmond-Hellmann told the OME participants in her opening remarks. “It could completely transform the way pharmaceutical companies and biotech approach development. It could turn a multi-decade process into a rapid process.”

National Institutes of Health Director Francis Collins, MD, PhD, who was among the participants actively engaged in problem solving at the summit, explained the fundamental shift in the practice of medicine that this movement is attempting.

“Medicine for most of human history has been one-size-fits-all. But we’re all different, and the diseases we have lumped together under one label we’re finding out are actually at the molecular level quite distinct,” Collins said. “Precision medicine tries to understand what’s underneath those disease layers and tries not to lump everyone together but think about individual differences.” 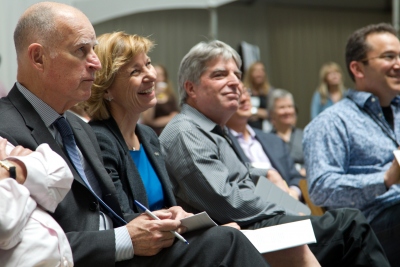 UCSF, the leading university exclusively focused on health, took a unique approach in convening OME 2013, enlisting the help of leading design firm IDEO to create a collaborative work environment for the participants.

Rather than passively watching keynote speeches and presentations, participants – who were invited based on their expertise from diverse fields – were split into teams, each tasked with tackling a specific challenge to implementing precision medicine.

“It’s pretty amazing to be in the room with about 150 leaders in the whole area of precision medicine from inside and outside the country,” Collins said. “We’re working on projects that could be initiated, that could bring us closer to dramatic developments for prevention and treatment of disease.”

“We all go to a lot of conferences, and they're usually one speaker after another, but everyone ends up talking to one another on the side. This is designed to maximize those informal discussions that normally happen outside the conference itself – make sure people with different expertise and knowledge bases are talking about how to move this forward and work together to shape a future that will really matter,” Hamburg said.

Special guests, such as California Gov. Jerry Brown and Facebook CEO Mark Zuckerberg, also attended OME to see firsthand some of the innovations under way and lend their support to the important cause.

“It wasn’t very many years ago, I didn’t have much medical data,” Brown told the participants. “But now I’m 75, and in the last couple years, I seem to have accumulated a lot – way too much – and I’m creating more every year. And I’ll share it.”

OME 2013 culminated in a quick-pitch session, during which teams presented their proposals and identified the financial, technological and political resources needed to carry the ideas further.

From launching a simple invention to establishing a global data consortium, the proposals pieced together the puzzle that could make precision medicine a reality.

Some of the pitches included:

In a final presentation at the quick-pitch session, Desmond-Hellmann addressed the need to engage people in their own health. The key to making precision medicine work is garnering public awareness of the field, getting support for new legislation to change patient privacy laws and enlisting people to donate their data in the interest of helping their loved ones – and all of humanity. 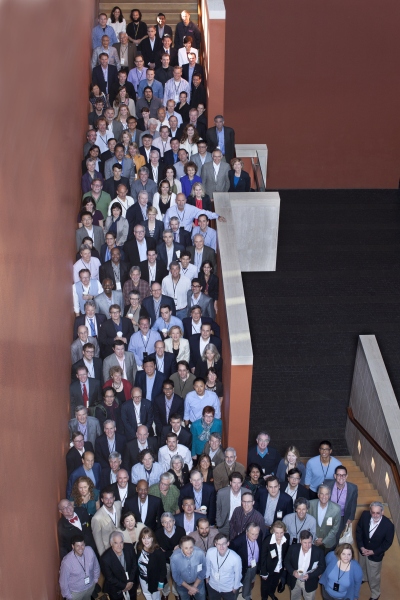 UCSF invited more than 150 leaders from government, science, technology, business, media and academia to discuss how to activate the future of precision medicine.

HIPAA (Health Insurance Portability and Accountability Act), which restricts sharing of patient health information, is there to protect patients, “but are we protecting people or preventing them from the access to information that could help them?” Desmond-Hellmann asked. “I’m the wrong person to push that, but we are the right people – the public.”

Desmond-Hellmann then introduced UCSF’s new public awareness campaign aimed at educating people about the benefits of precision medicine. MeForYou.org calls on people to take ownership of their health and to show their support for this movement by making a simple dedication to someone they care about that can be shared on social media to help spread the word.

Desmond-Hellmann, a former practicing oncologist, shared a story about treating a 28-year-old woman in the 1990s who lost her battle with an aggressive form of breast cancer. For the chancellor, who’s still haunted by the memory of that young mother, the dedication came easy: She does it for patients.

Ultimately, she said, “The goal is to bring about greater awareness about how data from each one of us benefits all of us.”