Community intervention with free mobile HIV testing and counseling, same-day results and post-test support led to a 14 percent reduction in new HIV infections in targeted communities in Sub-Saharan Africa, according to results of a large randomized, controlled trial.

In women between the ages of 25 and 32, the intervention showed an even greater effect, with rates of new infections lowered by almost one-third.

The trial, National Institute of Mental Health “Project Accept” (HIV Prevention Trial Network 043), was conducted in 48 communities at five sites in Zimbabwe, Tanzania, South Africa and Thailand. The study was undertaken by UC San Francisco at the Zimbabwe site in collaboration with the University of Zimbabwe. The trial sought to demonstrate a community-level impact on HIV when proven prevention interventions were taken to scale. A primary goal was to increase awareness of HIV status by decreasing barriers to testing.

“HIV testing increased by a quarter overall and we saw a four-fold increase in the detection of new HIV cases at the Sub-Saharan sites.” said Stephen F. Morin, PhD, co-principal investigator of the multi-institution trial and professor of medicine at the UCSF Center for AIDS Prevention Studies.

“The trial was particularly effective in increasing HIV testing among men. At baseline, women were far more likely to have been tested than men and the intervention increased their testing by 15 percent. However, the study’s success in substantially increasing HIV testing in men, by 45 percent, erased the gender gap.”

“The trial demonstrated that a well designed and implemented intervention can change behavior that leads to an effect at a community level. We were particularly successful in changing behavior in men after they learned they were infected, and we saw the impact in the sharp reduction in the rate of new infections in women in the intervention communities,” said Morin.

The results of the trial were presented at the Conference on Retroviruses and Opportunistic Infections in Atlanta.

The trial was conducted over a 36-month period and involved large numbers of participants: 33,774 households were visited by field teams at baseline and 84,947 were visited at the post-intervention assessment. All of the sites, except Soweto, South Africa, were predominately rural. The Chiang Mai, Thailand, site was notable for the very low percentage of people in the community living with HIV – less than 1 percent. 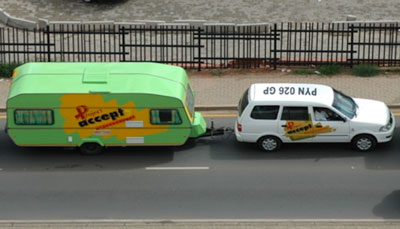 A Project Accept van is deployed in the Soweto district of Johannesburg, South Africa. 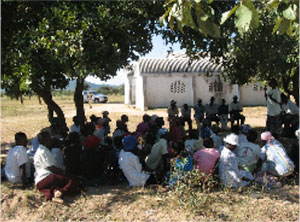 The UCSF Center for AIDS Prevention Studies served as the Intervention Core for the multisite study. The Intervention Core was responsible for the actual implementation of the different components over the 36-month duration of the trial. For the successful implementation of a trial based upon community mobilization, a key element was to create and sustain a supportive environment in the community. At the time Project Accept started, many communities had little or no access to HIV testing and stigma was pervasive.

“We built strong relationships with community leaders and elders, which was essential in rural settings. We also engaged the early adopters of the intervention as community outreach volunteers. Living in the community and accessible to the community for questions, they also provided us with feedback as to what the community was thinking and that allowed us to adapt the intervention to better fit each community,” said Gertrude Khumalo-Sakutukwa, MSSW, MMS, director of the Intervention Core and research specialist at the UCSF Center for AIDS Prevention Studies.

The UCSF Center for AIDS Prevention Studies is affiliated with the AIDS Research Institute (ARI) at UCSF. UCSF ARI houses hundreds of scientists and dozens of programs throughout UCSF and affiliated labs and institutions, making ARI one of the largest AIDS research entities in the world.