A decade after opening its first research building at San Francisco’s Mission Bay, UCSF has far surpassed its ambitious vision for a campus that today is an epicenter for science, health and hope.

This year, UCSF celebrates a decade of discovery at Mission Bay – a milestone that represents both a scientific renaissance and a significant revitalization of a once-blighted area in San Francisco’s southeast sector.

Since breaking ground in 1999, the development of the $3 billion Mission Bay campus is considered the single most important endeavor that UCSF has undertaken in its nearly 150-year history.

It is a spectacular success story in San Francisco, the “city that knows how” to get things done. It is the largest development in the city, second only to the construction of Golden Gate Park. And it is one of the nation’s largest university expansions.

UCSF Mission Bay exemplifies the University’s ongoing quest to explore, examine and ultimately answer some of the most awe-inspiring and vexing questions of human health. Read about science at Mission Bay.

A History of Opportunity and Accomplishment

Sixteen years in the making, UCSF Mission Bay is the product of a public-private partnership that involved leaders from government, business, the community and academia, as well as generous donors.

Working together, they planned a campus that would generate new bioscience discoveries with a singular focus on improving health. They hoped it would become a bioscience magnet to attract life sciences institutions and private sector companies around the campus. They believed it would fuel the economy and create jobs. 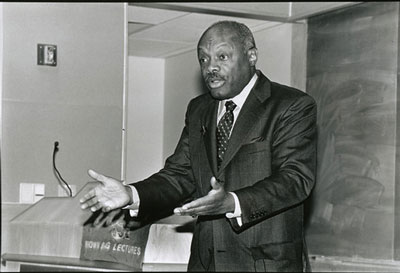 Willie Brown, shown here speaking at a 1999 UCSF brown bag lecture, played a key role in making sure the University built its new campus in the Mission Bay area, rather than locating outside San Francisco. ©Christine T. Anderson 1999

“For more than 130 years, San Francisco and UCSF have shared a history of opportunity, innovation and accomplishment,” said then-Mayor Willie Brown in 1999. “With UCSF’s new campus located at the heart of the Mission Bay development, this partnership between a great city and a great university promises to continue long into the future.”

That promise has been kept. Today, Mission Bay is home to three UCSF Nobel laureates, among the nearly 4,000 faculty members, staff and students who work, teach and learn there.

UCSF Mission Bay has attracted a growing and collaborative ecosystem of more than 50 bioscience start-ups, nine established pharmaceutical and biotech companies, 10 venture capital firms and top scientific institutions such as the J. David Gladstone Institutes and the California Institute for Regenerative Medicine.

The Bay Area Life Sciences Alliance, or BALSA, was instrumental in the founding and shaping of the UCSF Mission Bay campus, as well as efforts to ensure that it became a national model of bioscience centers. Here are the BALSA leaders in 1999, the year UCSF broke ground at Mission Bay:

And UCSF – now occupying 57 acres at Mission Bay – continues to change the city landscape. UCSF Medical Center at Mission Bay will open its doors in February 2015 to women, children and cancer patients. By locating the hospital across the street from the original research campus, UCSF has the unique opportunity to transform health care by translating scientific discoveries into improved patient care through the already strong culture of collaboration between clinicians and scientists.

“This combination of breadth and depth of health science research and patient care, with a singular focus on health with a public benefit, is truly unique at UCSF,” said UCSF Chancellor Susan Desmond-Hellmann, MD, MPH. “And it places UCSF in the perfect position to lead the next revolution in health care – precision medicine.”

“At UCSF, we envision a time in the near future when we can harness the power of biomedical information – both at the personal and the global level – to deliver precise and personalized care that redefines the practice of medicine worldwide.”

While four chancellors and scores of faculty, staff and others have worked through the years to make Mission Bay a reality, most of the credit for its founding goes to a few individuals. They are:

From Marshland to Bioscience Mecca

For as productive as this 303-acre property has become, Mission Bay had humble beginnings. Once a salt marshland with marine life, the area was built at the turn of the century by filling the inlet mostly with debris from earthquakes.

Although Mission Bay was largely underdeveloped at the time – an area of abandoned Southern Pacific railroad yards, warehouses and a driving range for golfers – UCSF leaders considered building its second major campus outside the city, at locations in Alameda and Brisbane.

They worked with members of the community, particularly a reconfigured Community Advisory Group (CAG) that included new members from Potrero Hill, South Beach and Bayview Hunters Point, to ensure concerns were heard. Longtime CAG members also were invited to the table. When the UC Regents approved UCSF’s 300-page Long Range Development Plan in 1997, it contained a statement of 160 goals and objectives co-authored by the CAG.

“The University and community are essential to one another,” Dennis Antenore, a longtime CAG member, said in 1999. “It would have been a great loss to San Francisco if UCSF had moved to a new site outside the city. That’s one of the most important things I’ve learned in this process.”

The University’s primary motive for expansion was to find room to grow its vast research enterprise, which ranks among the top institutions to garner National Institutes of Health funding. UCSF had outgrown its facilities at its flagship Parnassus campus to the point where faculty converted custodial closets into offices.

The turning point in the University’s decision to move to Mission Bay came with a landmark deal struck by UCSF’s Spaulding, Mayor Brown and Catellus’ Rising. At the time, that donation of land was valued at $170 million.

In September 1997, Catellus agreed to donate 30 acres of property for the UCSF campus. The transfer of land was organized in phases to accommodate the University’s development plans and to optimize the tax benefits Catellus would realize though its donation of property. By October 1998, the Board of Supervisors voted unanimously to donate the remaining acres within the campus site to the University of California Regents. 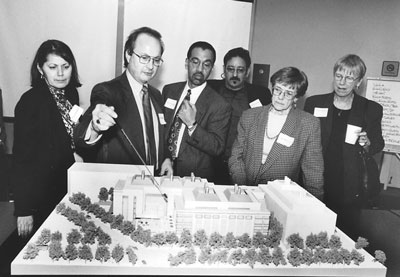 In March 1999, Bruce Spaulding, second from left, then-vice chancellor for University Advancement and Planning, shows members of the Community Advisory Group features on a model of what would become Genentech Hall, UCSF's first research building to open at the Mission Bay campus. ©Christine T. Anderson 1999

“At full build out, Mission Bay will provide UCSF with the space it needs for decompression, expansion and consolidation, and will form the centerpiece of an exciting new San Francisco neighborhood,” Spaulding told the UC Regents at a meeting on Feb. 18, 1999.

At that same Regents meeting, Chancellor Bishop described the daring, yet well-reasoned vision for Mission Bay.

“Our development there will be the linchpin of the effort to revive the neighborhood, and thereby to enhance the economic climate of San Francisco, and to further enrich life in this great city,” he told the Regents. “I and my colleagues at UCSF are determined to create at Mission Bay a glorious place for discovery, instruction and public service. We will be setting the tone for a new cityscape and an entire neighborhood. We simply must not fail to do this well.”

In planning this new campus, UCSF’s world-renowned faculty have been involved from conception to execution.

“Faculty have been involved from the very beginning – defining programs that will populate the campus, how these programs will interact with ongoing and newly developing programs at Parnassus and all the way down to lab and building design,” Keith Yamamoto, PhD, said in 1999 when he was chair of the 44-member Mission Bay Task Force.

That task force, established in December 1996 by Haile Debas, MD, then dean of the UCSF School of Medicine, proved critical to the Mission Bay campus development in the early years. After months of soliciting opinions from faculty, students and other members of the community and considering various specific proposals, the committee agreed on several principles to guide its development.

An important principle was that the UCSF’s research activities at all sites, including Parnassus, Mount Zion and San Francisco General Hospital, be enhanced by the development of Mission Bay. In the years since, UCSF has opened new buildings at both Parnassus and Mount Zion.

Zach Hall, PhD, then vice chancellor for research at UCSF, described the third principle, strongly enunciated by the faculty that “Mission Bay be developed as contemporaneously as possible, so that a substantial core of our basic science activities could be transferred to the new site quickly, without disrupting the complex and intense set of interactions among faculty that have made the UCSF campus so successful. Thus, the initial step for our new campus must be a quantum jump, not a slow, piecemeal addition of buildings and research programs.” 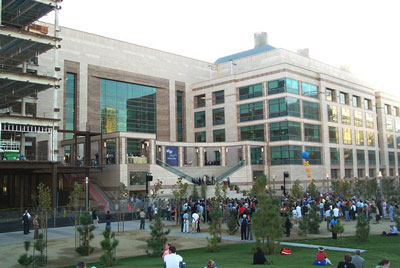 UCSF celebrated the official opening of its first research building at the Mission Bay campus, Genentech Hall, in October 2003.

With that principle in mind, UCSF did deliver Genentech Hall, a 434,000-square-foot building, which housed structural, chemical, molecular and cell biology programs; and a second 185,000-square-foot research building for developmental biology, genetics and a core of neuroscientists, now called the Arthur and Toni Rembe Rock Hall.

The third building, a campus community center designed by the late Mexican architect Ricardo Legorreta in the color of International Orange later called the Rutter Center, opened soon after.

At an opening reception at Genentech Hall on Oct. 17, 2002, Bishop poetically put out the welcome mat.

“We are eager to have neighbors who can become partners in our research, in our training programs, and most of all, in developing the fruits of our labors into salutary products for humankind.”

The rest is history.