A Phase I clinical trial led by investigators from the University of California, San Francisco (UCSF) and sponsored by Stem Cells Inc., showed that neural stem cells successfully engrafted into the brains of patients and appear to have produced myelin.

The study, published in Wednesday's issue of Science Translational Medicine, also demonstrated that the neural stem cells were safe in the patients’ brains one year post transplant.

The results of the investigation, designed to test safety and preliminary efficacy, are encouraging, said principal investigator David H. Rowitch, MD, PhD, a professor of pediatrics and neurological surgery at UCSF, chief of neonatology at UCSF Benioff Children’s Hospital and a Howard Hughes Medical Institute Investigator.

“For the first time, we have evidence that transplanted neural stem cells are able to produce new myelin in patients with a severe myelination disease,” said Nalin Gupta, MD, PhD, associate professor of neurological surgery and pediatrics and chief of pediatric neurological surgery at UCSF Benioff Children's Hospital, and co-principal investigator of the PMD clinical trial.

“We also saw modest gains in neurological function, and while these can’t necessarily be attributed to the intervention because this was an uncontrolled trial with a small number of patients, the findings represent an important first step that strongly supports further testing of this approach as a means to treat the fundamental pathology in the brain of these patients.”

The study, one of the first neural stem cell trials ever conducted in the United States, is emblematic of UCSF’s pioneering role in the stem cell field. In 1981, Gail Martin, PhD, professor of anatomy, co-discovered embryonic stem cells in mice. In 2001, Roger Pedersen, PhD, professor emeritus of obstetrics, gynecology and reproductive sciences, derived two of the first human embryonic stem cell lines. On Monday, Shinya Yamanaka, MD, PhD, of the UCSF-affiliated Gladstone Institutes and Kyoto University, received the Nobel Prize in Physiology or Medicine for his discovery that adult cells can be reprogrammed to behave like embryonic stem cells.

In the trial, human neural stem cells developed by Stem Cells, Inc., of Newark, California, were injected directly into the brains of four young children with an early-onset, fatal form of a condition known as Pelizaeus-Merzbacher disease (PMD).

In PMD, an inherited genetic defect prevents brain cells called oligodendrocytes from making myelin, a fatty material that insulates white matter which serves as a conduit for nervous impulses throughout the brain. Without myelin sheathing, white matter tracts short-circuit like bare electrical wires and are unable to correctly propagate nerve signals, resulting in neurological dysfunction and neurodegeneration. Patients with early-onset PMD cannot walk or talk, often have trouble breathing and undergo progressive neurological deterioration leading to death between ages 10 and 15.The disease usually occurs in males.

Before and after the transplant procedures in the children with PMD, which were conducted between 2010-2011, the patients were given standard neurological examinations and developmental assessments, and underwent magnetic resonance imaging (MRI). “MRI is the most stringent non-invasive method we have of assessing myelin formation,” said Rowitch.

The investigators found evidence that the stem cells had successfully engrafted, receiving blood and nutrients from the surrounding tissue and integrating into the brain, a process that Rowitch likened to “a plant taking root.”

This finding was particularly significant, he said, because the cells were not the patients’ own stem cells. “It would have been just as likely to expect that the patients would have rejected them,” he said.

The investigators also found indirect evidence that the stem cells had become oligodendrocytes and were producing myelin. “There is no non-invasive way to test this definitively,” cautioned Rowitch, “but our MRI findings suggest myelination in the regions that have been transplanted.” 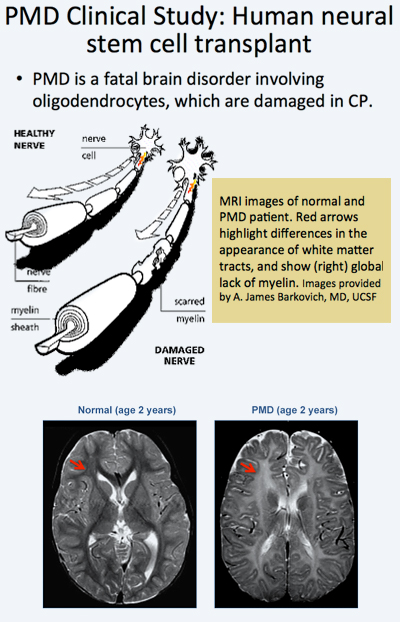 Once transplanted and engrafted, neural stem cells have the potential to differentiate into a number of different brain cell types, depending on the area of the brain into which they are inserted. The sites chosen for the Phase I study were known from animal studies to be the most likely to result in the formation of oligodendrocytes.

In an animal study by another team of investigators, at Oregon Health & Science University's Papé Family Pediatric Research Institute, published in the same issue of Science Translational Medicine, Stem Cells Inc’s neural stem cells were injected into mouse models and became oligodendrocytes and formed myelin. “The animal study is consistent with the MRI findings from the clinical trial and further supports the possibility of donor-derived myelination in human patients,” said Rowitch.

“This is a landmark study for the field,” said Arnold R. Kriegstein, MD, PhD, director of the Eli and Edythe Broad Center of Regeneration Medicine and Stem Cell Research at UCSF. “Without such studies in human patients, we won’t really know how transplanted cells behave – whether they disperse or migrate, whether they engraft or degenerate and die, whether immune-suppressing regimens really work or not. It’s only through these investigations that we will be able to refine the necessary procedures and technologies and make progress toward cell-based therapies for this disease and related disorders.”

The Eli and Edythe Broad Center of Regeneration Medicine, one of the premier stem cell programs in the world, is focused on understanding the ways stem cells function, with the goal of developing therapies to treat a broad range of diseases, including cardiovascular disease, diabetes and neurological diseases.

The study was sponsored and supported by StemCells, Inc.