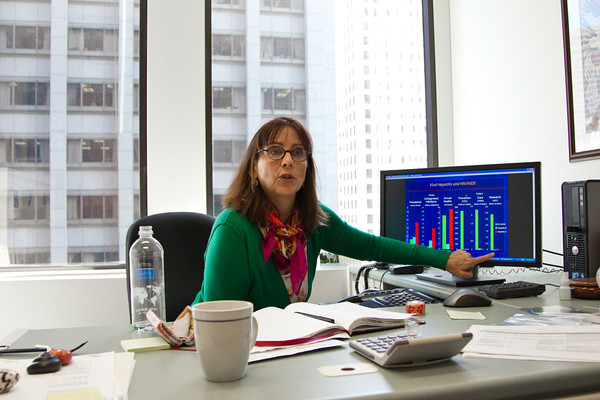 With funding from the U.S. Centers for Disease Control and Prevention, UCSF epidemiologist Kimberly Page is developing guidelines so that other cities can adopt the San Francisco model of outreach, education, counseling and care developed and practiced at the Tenderloin Clinical Research Center. The model is tailored to young injection drug users, who are at highest risk for hepatitis C.

At the edge of a San Francisco neighborhood that has been riddled with drug addiction for decades, UCSF epidemiologist Kimberly Page, PhD, MPS, leads a research team that provides outreach, screening and prevention programs for drug users.

Those who come to the Tenderloin Clinical Research Center on Market Street for Page’s study are young — the average age is 22. Most are white, and almost all inject drugs.

This profile is not unique to San Francisco — the population of young injection drug users appears to be growing in towns and cities across the country, and it is one that is especially vulnerable to hepatitis C infection.

Among those who inject drugs, hepatitis C infection is more prevalent than infection with HIV or hepatitis B. About half become chronically infected with hepatitis C. Blood from shared needles and other drug paraphernalia are major conduits for infection.

If you are infected with hepatitis C virus — like more than 3 million people nationwide — there is a good chance you don’t know it, unless your liver is acting up and causing symptoms that may take decades to develop. And if you are unfortunate enough to be homeless and to use drugs, you might find it difficult to get treatment even after learning of the infection.

Page hopes that growing concern about hepatitis C infection among an older, larger and more mainstream demographic — baby boomers — will lead to better care for all who are at risk or who already are infected, including the young people who visit the center, feeling welcomed by the non-judgmental demeanor of staffers, and perhaps by the free meals and clothing offered.

Public health officials have determined that 1 in 33 baby boomers is chronically infected with the virus — and that only about one-third of those who are infected are aware of it. Many boomers also became infected by injecting drugs, but in addition many became infected through medical treatment, having received infected blood products before testing of these products became available in 1992. The virus itself was not discovered until 1987.

The overall incidence of new hepatitis C infections has declined since blood testing became widespread, but because the most deadly outcomes of infection — liver cirrhosis and liver cancer — take decades to develop, deaths caused by hepatitis C are still on the rise, a trend expected to continue for years, according to the U.S. Centers for Disease Control and Prevention (CDC). In the U.S., hepatitis C now kills more people than HIV.

A study of drug addiction among youth in Massachusetts published by the CDC in 2011 found that the number of hepatitis C cases climbed sharply among injection drug users ages 15 to 24, corresponding to an increase in admissions to substance abuse programs for this age group. Among this demographic, more than three-quarters of the infected identified in the study were white. Nationwide, collectively for all age groups, addiction to both prescription painkillers and to heroin increased between 2002 and 2010.

Page is a firm believer in testing for hepatitis C infection among those at high risk. “There ought to be as few barriers as possible for getting tested, so that people can access both treatment and prevention services,” she says.

But even with the best treatment not all who are diagnosed and treated will clear the virus. And while there is a vaccine to prevent hepatitis B, there is none approved for hepatitis C. 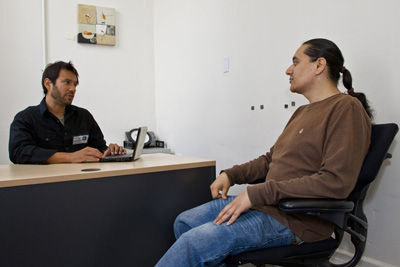 A participant in the "You Find Out" study talks with a counselor at the Tenderloin Clinical Research Center in San Francisco.

In fact, Page and colleagues from Johns Hopkins University, with funding from the National Institutes of Health (NIH), are leading the first multi-center, double blinded, randomized, placebo-controlled trial of a vaccine to prevent hepatitis C infection. They plan to enroll 350 participants in the trial, to test a vaccine developed by Okairos, a pharmaceutical company headquartered in Basel, Switzerland.

Prevention remains key. According to Page, “The problem is that we still have very few resources available for the prevention of hepatitis C, and prevention efforts for hepatitis still suffer in comparison to other blood-borne infections.”

Since 1997, Page has led a study called UFO, which stands for “You Find Out,” – in line with the educational, prevention and screening goals of her research, which so far has included well over 1,200 young participants. Among the injection drug users interviewed and followed during the study, more than 1 in 4 have become infected with hepatitis C virus within a year of starting to inject drugs. More than 20 percent were able to rid themselves of the virus spontaneously, Page and colleagues discovered, but many quickly become infected again. Some are re-infected and clear the virus multiple times, and research is underway to better understand how these events affect the immune system.

With funding from the CDC, Page is developing guidelines so that other cities can adapt the UFO model of outreach, education, counseling and care developed and practiced at the Tenderloin center. The model is tailored to young injection drug users and emphasizes the use of peer leaders in counseling sessions, provides for one-on-one time with a nurse-educator, and addresses common questions and issues that arise in the community. In addition to referrals, services include a drop-in center, syringe access, immunizations, counseling and testing for hepatitis C and HIV, and support groups.

Worldwide, the hepatitis C virus — experts shorten the name to HCV — infects an estimated 170 million to 200 million people. To learn more about risk behaviors and effective prevention and treatment measures for injection drug users across nations, Page helps lead a large epidemiological study known as the International Collaboration of Incident HIV and HCV in Injecting Cohorts, through which researchers are pooling data for nearly 6,000 people from nine international studies.

Page’s research group is studying risk behaviors, as well as basic biological phenomena associated with infection, including the ways in which variations in immune-system responses affect clearance of the virus. People who rid themselves of the virus after acute infection generally do so within six months, Page says. Treatment also is most effective during this window.

“Testing for HCV needs to be expanded to multiple sites and venues,” according to Page. “We have to be broader in targeting hepatitis testing outside the world of HIV testing. Despite some overlap, the population at risk for HCV is broad and encompasses many groups, ages and cultures.”

Federal officials have been trying to raise the profile of hepatitis C recently, at least among baby boomers, in part because more can be done to find those who are infected and successfully treat them compared to even a year ago. New hepatitis C treatment is much better than previous regimens. Combination treatment with the latest drugs clears chronic infection most of the time, and additional promising treatments are in the pipeline. And in November, 2011 the U.S Food and Drug Administration approved widespread use of rapid blood test to detect exposure to hepatitis C virus.

On May 18, 2012, the CDC announced recommendations for one-time hepatitis C screening for individuals in the U.S. born from 1945 through 1965. The agency estimated that in the U.S. 800,000 new cases could come to light through such a screening program.

Students Vaccinate Against Hepatitis B in Chinatown