A pioneering approach to imaging breast cancer in mice has revealed new clues about why the human immune system often fails to attack tumors and keep cancer in check. This observation, by scientists at the University of California, San Francisco (UCSF), may help to reveal new approaches to cancer immunotherapy. 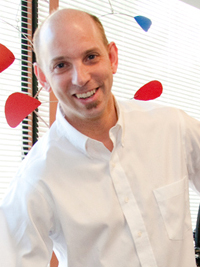 Published in the journal Cancer Cell last month, the work shows that the body's natural defenses trip over themselves on their way to attacking a tumor. The activated immune cells, alerted to the threat of the tumor, should make their way to the site of the cancer and then attack and shrink the tumor.

Instead, these immune cells are headed off at the pass. A completely separate set of healthy cells that are already in contact with the tumor effectively establish a defensive perimeter around it. There, like a thin red line between cancer and health, they head off the killer immune cells and keep them at bay outside the tumor.

"These cells are forming a last line of defense for the tumor against incoming cytotoxic cells," said Matthew Krummel, PhD, an associate professor of pathology and a principal investigator in the UCSF Helen Diller Family Comprehensive Cancer Center.

The discovery adds a rich layer of understanding of how the immune system interacts with breast cancer, knowledge that may ultimately help researchers find better ways to treat the disease, said Krummel. Future immunotherapy cancer treatments could be made more effective on their own or in combination with other drugs, he said, if researchers can find a way to enhance the ability of T cells to make it through this tumor defense.

Unlocking the Secrets of Cancer

Cracking open a crashed airplane’s black box to parse its flight data and recreate its final few seconds is a powerful way of asking how improvements could be made to aviation safety. Biologists would like to do essentially the same thing with cancer: to liberate the data, see what went wrong and use that knowledge to find new ways to improve human health.

Because biology has no flight recorders, modern researchers look broadly at the genetics of large populations, or tease apart the molecular markers within tumors or closely following the disease as it develops in laboratory models. 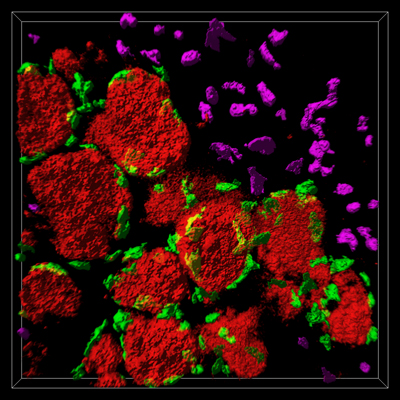 Confocal microscope image of a spontaneous breast cancer tumor in a mouse.

Krummel and his colleagues developed a way to produce different fluorescent-colored dyes in breast cancer tumors and the various cells around them, They then used a special microscope to image and track immune cells as they moved in and out of breast cancer tumors that arise spontaneously in the mouse. "We can see each of them arise, see where they are in the tumor and watch their direct interaction with immune cells in real time," he said.

What they found was that the interaction between breast cancer and the immune system is marked by missed opportunities.

Fighting cancer is one of the things the immune system is designed to do, in numerous ways. One of these is by unleashing a set of actors known as killer T cells, which can destroy tumors by attacking their cells en mass. The success of this mechanism can mean the difference between a tumor that withers away and one that continues to grow to more advanced stages.

But the scene Krummel and his colleagues watched unfold under their microscopes revealed a subset of specialized “dendritic” cells that they were then able to extensively study. With the fluoroscent labeling technique they devised, they were able to purify just these cells and observe how they dampen the killer T cell responses.

As Krummel and his colleagues showed, these cells deactivated approaching killer cells, stifling them before they could spring into action.

This set of experiments is critical for cancer immunobiologists, said Krummel, because the data is the first to positively identify a partner for the incoming killer T cells. The fact that the interaction dampens the potency of the killer cells makes the dendritic cells a valuable target for future therapeutics.

This work was supported by the National Institutes of Health and the Cancer Research Institute. Additional support was provided through an EMBO fellowship and an NIH Training Grant fellowship.