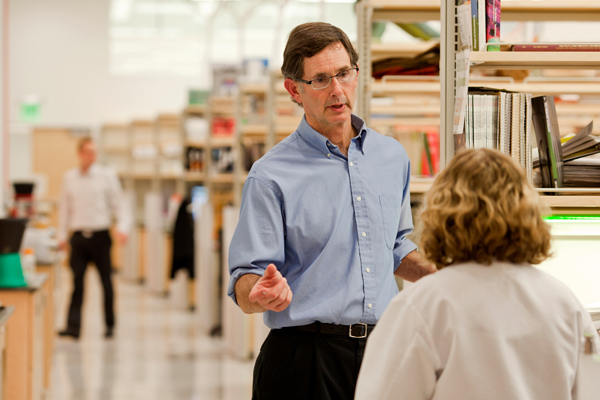 Results of a recent faculty climate survey show that the intellectual stimulation from working with talented faculty, students, trainees and staff at the health sciences university ranks highest in faculty satisfaction. Above, C. David James, PhD, professor and Berthold and Belle N. Guggenhime Endowed Chair of Neurological Surgery, talks with a colleague at UCSF.

The University of California, San Francisco (UCSF) has seen a significant improvement in the career and work satisfaction of UCSF faculty over the last decade, according to the findings of a recent faculty climate survey.

In particular, the survey shows that women faculty feel more positively about conditions at UCSF than they did in 2001, the last time a faculty climate survey was conducted.

The survey, conducted from April 27 to May 19, 2011, was administered by an independent research firm. Sixty-one percent of UCSF faculty responded to the survey. 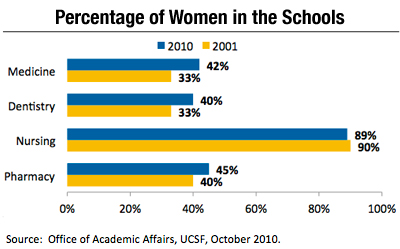 A majority of women believe that UCSF is effective in promoting a climate free of gender discrimination, the survey says. Seven in 10 women said the climate for women was good or very good at UCSF, and in their schools and department. And the number of women who believe there is a great deal or some unequal treatment for women at each level has dropped by half from 54 percent to 27 percent since 2001, according to the survey report.

The view that women face a glass ceiling for promotion at UCSF, already low in 2001, has dropped even further to 9 percent.

The improved opinions about the opportunities for women faculty to climb the academic ladder may be influenced by the fact that UCSF — for the first time in its nearly 150-year history — has a woman chancellor, Susan Desmond-Hellmann, MD, MPH. In 2010, UCSF was named the country’s second-best academic work setting, according to a survey by The Scientist magazine.

Since her arrival as chancellor in August 2009, Desmond-Hellmann has made people one of her top five priorities, and together with her leadership team, updated UCSF’s strategic plan. That plan sets a goal for UCSF to be the workplace of choice for diverse, top-tier talent. A climate survey, planned for this fall across all 10 UC campuses, will provide additional feedback from faculty, staff, students and trainees about the environment at UCSF.

While the 2011 faculty survey shows significant improvement in the job satisfaction of women faculty, this change has not erased the gap in perception between women and men. The survey reveals that male faculty members continue to be much less likely than women to perceive problems related to gender equity.

But, overall, both men and women faculty are satisfied with most aspects of their career and work life at UCSF, according to the survey report (see Figure 1).

The results of the survey, including an overview of UCSF, executive summary and entire report are posted on the Academic Affairs website.

The 2011 survey was a follow-up to a 2001 survey conducted by the same Washington, D.C.-based survey firm, now called Belden Russonello Strategists.

Former Chancellor J. Michael Bishop, MD, commissioned the 2001 faculty survey at UCSF following the 1999 release of an MIT report on women in science, which gained widespread media attention after it revealed that discrimination — often unintentional and subtle — existed at many levels at MIT. One of the report’s authors, MIT Professor of Biology Nancy Hopkins, PhD, winner of the 2003 UCSF Medal, has been praised for her ongoing work calling attention to and addressing gender inequities in academia.

Based on the results of the 2001 UCSF faculty survey [PDF], a UCSF task force made 10 recommendations, which were endorsed by Bishop.

The first recommendation was to form the Chancellor's Council on Faculty Life (CCFL), which was charged with addressing the other nine recommendations as well as with the broader charge of improving faculty life at UCSF. Over the past decade, the CCFL, other UCSF committees and organizations and UCSF senior leaders have been implementing new programs, policies and initiatives to improve the quality of the faculty’s academic and professional experience at UCSF, and to support them in their career advancement and personal life. 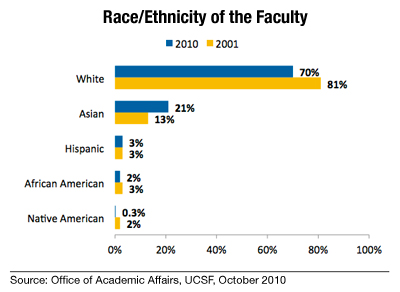 The 2011 climate survey report includes a comparison with the 2001 survey results across a range of areas, such as mentoring, flexibility for family/personal needs and prospects for career advancement, that indicate improvement and success of CCFL programs and other campus initiatives to improve the quality of life for UCSF faculty (see Figure 3).

Among the areas that factuly believe still need improvement at UCSF, as evidenced by that same comparison chart, are income, job security, grants and financial support (for new ventures), according to the survey report.

A recent faculty climate survey finds that at least two-thirds of faculty respondents were satisfied with almost all aspects of their careers at the University.

“Over the past decade we have made a number of improvements in the quality of faculty life at UCSF, but we still face challenges," says Sally Marshall, PhD, vice provost for Academic Affairs at UCSF and chair of the CCFL. “We will continue our improvement efforts with renewed vigor. The CCFL is committed to continually responding to faculty feedback and working with the UCSF community to continue developing initiatives and programs to enhance the climate for faculty.”

Marshall says that the CCFL will assess the results of the 2011 survey and develop an action plan with input from other key groups, such as the Chancellor’s Advisory Committee on the Status of Women, the Office of Diversity and Outreach and the Council on Campus Climate, Culture and Inclusion, to address issues raised in the survey in relation to Chancellor Desmond-Hellmann’s future plans.

The CCFL will partner with UCSF leaders and stakeholders to address some concerns raised by faculty in areas such as salaries and grants.