A new brain cancer vaccine tailored to individual patients by using material from their own tumors has proven effective in a multicenter phase 2 clinical trial at extending their lives by several months or longer. The patients suffered from recurrent glioblastoma multiforme—which kills thousands of Americans every year. 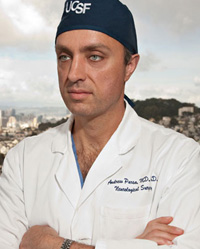 These results, to be announced Tuesday, April 17 at the American Association of Neurological Surgeons (AANS) meeting in Miami, compared the effectiveness of the vaccine for more than 40 patients treated at UCSF’s Helen Diller Family Comprehensive Cancer Center, at the Seidman Cancer Center at University Hospitals Case Medical Center in Cleveland and at New York-Presbyterian Hospital/Columbia University Medical Center in New York City.

The trial found the vaccine could extend survival for the patients by several months when compared to 80 other patients who were treated at the same hospitals and received standard therapy—47 weeks compared to 32 weeks. Several of the patients who received the cancer vaccine have survived for more than a year.

“These results are provocative,” said UCSF neurosurgeon Andrew Parsa, MD, PhD, who led the research. “They suggest that doctors may be able to extend survival even longer by combining the vaccine with other drugs that enhance this immune response.”

The next step, he said, will be a more extensive, randomized clinical trial to look at the effectiveness of the vaccine combined with the drug Avastin, a standard therapy for this type of cancer, compared to the effectiveness of Avastin alone. Those trials, to be run by the National Cancer Institute, will begin enrolling patients later this year.

Clinical Trial Paid for In Part by Patient Groups

The UCSF Department of Neurological Surgery is ranked by U.S. News & World Report as one of the top departments in the world. Its doctors perform more than 1,100 neurosurgeries a year to remove brain tumors, and in the last 30 years, this work has helped to build one of the most extensive brain tumor repositories in the United States, with tissue samples collected from thousands of people with cancer.

Part of the funding for the Phase 2 trial came though a $1.5 million-a-year grant to UCSF from the National Cancer Institute — called Brain Tumor SPORE (Specialized Program of Research Excellence). Now in its 10th year, the grant aims to translate basic laboratory and clinical discoveries into optimal ways of delivering treatment and monitoring a patient’s progress.

“It never would have happened without them,” Parsa said. “Patient advocacy groups are an important component of how we inform patients about this disease. These groups are also increasingly critical to funding translational research, which bridges the gap between the laboratory and the clinic.”

Parsa has not received any personal financial support, consulting fees, or travel expense reimbursement for this work from Agenus, Inc., the biotech company that makes the new vaccine. Neither Parsa nor UCSF have any financial interest in the company.

Background on Glioblastoma and Cancer Vaccines

Some 17,000 Americans are diagnosed with glioblastoma every year, and only 2 percent of them survive longer than five years — even with treatment. The cancer always recurs, he added, and it is only a matter of when.

Glioblastoma treatment generally begins with a surgical resection, in which neurosurgeons remove the cancerous tissue from the brain. The surgery usually is followed by radiation therapy and then chemotherapy to kill any remaining cancer cells. Many people undergo treatment only to have the cancer return a few months later, at which point doctors may operate again, followed by more chemotherapy.

Cancer vaccines are a relatively new approach that has appeared in the last decade. In 2010, the U.S. Food and Drug Administration approved the first therapeutic cancer vaccine for prostate cancer, and several more cancer vaccines are in clinical trial. The basic concept is similar to a vaccine for a disease like measles or mumps: an injection in the arm induces an immune response that helps the body fight the particular pathogen — or in this case, the cancer. An effective immune response would then shrink tumors and extend lives.

In the past, vaccines did not seem to work because they did not produce effective immune responses: either they did not kill all of the tumor cells or they worked on some patients but not on others. Work on the new vaccine began after several brain cancer advocacy groups pooled their resources several years ago and approached doctors at leading cancer centers, requesting proposals for new ways to fight recurrent glioblastoma. Parsa and his colleagues proposed a new type of cancer vaccine based on tiny molecular bundles called heat shock proteins.

These molecules are recovered from tumors surgically removed from patients in the trial. Agenus, Inc., prepares a vaccine specific for each patient and ships the vaccine back to the doctors who then inject it into the patient’s arm several times over the course of the year.